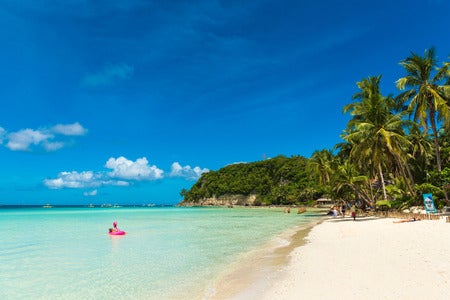 White Beach was described to have “calm, warm waters, gently sloping sand” and is “very relaxing. Possibly the most beautiful beach in Asia.” The travel site recommended tourists to visit the beach from the months of December to May.

While Boracay’s White Beach was the only Philippine beach named among the top 10 best beaches, two other beaches made it to the list’s top 25: Nacpan Beach and Las Cabanas Beach, both in El Nido, Palawan.

Nacpan Beach, ranked 13th in the list, was hailed for its “long coastline, golden sand, beautiful crystal waters and a completely virgin landscape…” Meanwhile, Las Cabanas Beach, which took the 22nd spot, was praised for its cleanliness, sparkling waters and nice bars.

Boracay and Palawan have been named time and again among having the best beaches in Asia by varied travel agents and travel companies in the past. At one point, Boracay’s White Beach was named No. 1 by TripAdvisor’s Asia’s best beaches back in 2013.

Through the years, Boracay has seen its fair share of problems and had to be closed down for a six-month cleanup last April 2018. The shutdown came after decades of uncontrolled mass tourism and overdevelopment turned the island into a “cesspool.” It was reopened to the public in October with a new set of limits: fewer hotels and restaurants, a cap on the number of tourists and no more beach parties. NVG

Boracay to reopen with fewer hotels, restos, no beach parties