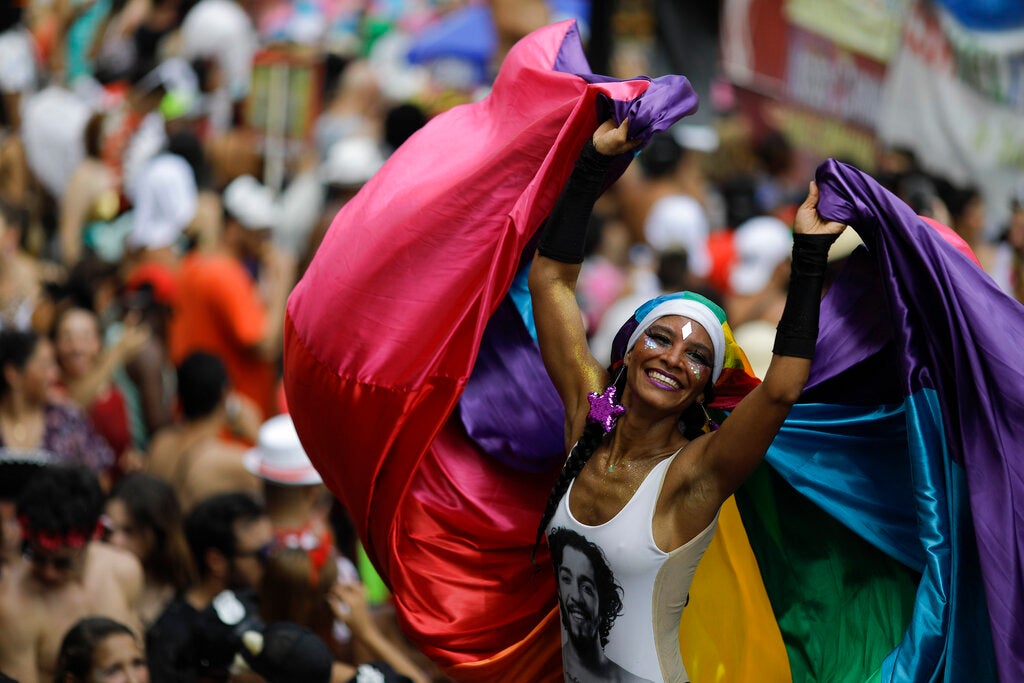 A reveler performs during the Carmelitas street party in Rio de Janeiro, Brazil, Friday, March 1, 2019. Much of the appeal of Rio street parties is the variety of themes and that people can dress up in costumes or not. Image: AP Photo/Leo Correa

At Carmelitas, one of Rio’s most traditional street parties, revelers sang along to a samba song titled: “Blue or pink, it’s all the same,” a reference to Bolsonaro’s human rights minister, Damares Alves, who declared: “It’s a new era in Brazil, boys wear blue and girls wear pink,” soon after she took up her post.

“This parade is an act of resistance to the oppressive new government,” said Monica Machado, a percussion player in the band.

The song’s lyrics went, “On the train of history, we can’t go in reverse,” a reference to the Brazilian president’s open admiration of Brazil’s 1964-1985 military dictatorship. Bolsonaro has famously said he would rather have a dead son than a gay son and that police who kill criminals should be given medals not prison sentences.

Vinicius Alves, a university student, wore all orange with a headband adorned with fake money and orange slices, a nod to the Brazilian expression “orange employee,” which refers to politicians’ use of ghost employees to launder money. Just three weeks into Bolsonaro’s government, questions were raised about suspicious payments to his son’s and wife’s bank accounts from his son’s driver, who many suspect was an “orange employee.”

“(The driver) has been called to court several times and never showed up, so I’m demanding answers this Carnival,” Alves said. “Carnival is resistance, samba is resistance.”

“Carnival is a moment to protest and express your opinion without limits,” said Joao Marcos Marinho, 57, whose Carnival garb also made an “orange employee” reference.

He said residents of the bohemian neighborhood where the party was being held “aren’t satisfied with the government and they’re saying it this carnival.”

In the lead up to the party, one group of revelers wrote a Carnival jingle that went viral. Its lyrics read, “Mommy, I’m going to buy a gun, Bolsonaro’s already made it easier, I’m going to shoot all the communists.”

At the official samba competition, one top samba school says its reaction to Brazil’s sharp turn to the right was a parade dedicated to untold parts of Brazil’s history.

“The Bolsonaro vote is linked to education,” explained Deivid Domenico, the co-author of the song. “The people of Brazil don’t know its history, its roots, its identity. This is why I think telling that history is important.”

Rio’s evangelical bishop-turned-mayor, Marcelo Crivella, came under fire on the party’s first day for skirting his duty to kick off the celebrations by handing over the key of the city to the king of Carnival for the third consecutive year.

Up until Carnival’s start on Friday, the carnival king and a cultural institution that guards the ceremonial key were left with no word from the city government if the ceremony would even happen. One hour before the event, the head of the city’s tourism board said he would participate in the ceremony. He told reporters that he would be turning in the keys to Carnival, not the keys to the city as is tradition.

“It’s very disrespectful. I’m trying to understand why they wouldn’t want to participate in this ceremony,” said Mauricio de Jesus, the president of the cultural center where the key is held.

The evangelical Crivella has made negative comments about African-rooted religions, which many Brazilians practice and have great cultural influence on Carnival celebrations.