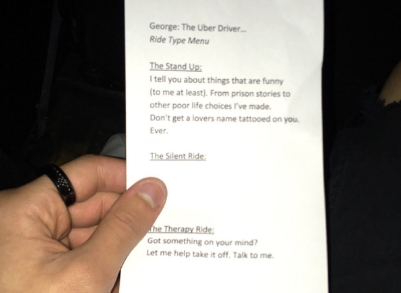 One Uber driver in Seattle, United States recently went viral, and for good reason, after a passenger of his shared a photo of his so-called “Ride Type Menu”.

“Last night my Uber gave me a menu on what kind of ride I wanted,” wrote a certian Luis via Twitter last Feb. 26 (Feb. 25 in the United States).

In the photo, the netizen can be seen holding a piece of paper with the list of ride types he can avail of, given to him by George, the TNV driver.

One of the ride types in the list were “The Stand Up” which allows George to tell stories to the passenger, from funny ones to tales of prison and other poor life choices.

“Don’t get a [lover’s] name tattooed on you. Ever,” advised George.

last night my uber gave me a menu on what kind of ride i wanted , pic.twitter.com/SMBBV4kVpu

Among others were the self-explanatory “Silent Ride”; “The Therapy Ride,” where the passenger can tell George whatever is on their mind; “The Creepy Ride”; and “The Rude Ride.”

In the end, the ride menu also reminded passengers to wear their seatbelt. Chargers are also available for every type of phone should a passenger need one.

The Twitter post has since gone viral, amassing over 540,000 favorites and almost 120,000 retweets since its time of posting.

The following day, Luis tweeted again, saying he has found the Twitter of George, the driver.

“My heart is filled with so much love right now, I’m happy George was able to see all the love he’s been getting,” wrote Luis. “He deserves it. So pure. I was merely the messenger. Much love @uber_george.”

my heart is filled with so much love right now, i’m happy George was able to see all the love he’s been getting , he deserves it. so pure. i was merely the messenger, Much love @uber_george

George, meanwhile, took to his own Twitter on the same day, where he shared an amusing photo of him amid his social media fame.

“Selfie while driving the other night,” he quipped. “Parked of course. #safetyfirst #drivesafe.”

Selfie while driving the other night. Parked of course. #safetyfirst #drivesafe pic.twitter.com/48TXpDk3gj

George, whose full name is George Ure, has been driving for the ride-hailing company for about three months now, as per BuzzFeed News on March 4. He revealed that the idea for the ride type menu started off as a joke inside his head.

“People would come in [my car] and I would be like, ‘gosh, I should make a menu,’” he said in the report. “It’s one of those jokes that was like, ‘holy shit, that’s a really good idea.’”

George even consulted a chef friend of his for help in laying out his ride menu the way restaurants do, then printed out twenty copies to leave in his backseat.

“Those people by default are a silent ride,” George added. “If you don’t want to talk, that’s cool — I have social skills.” Cody Cepeda/JB