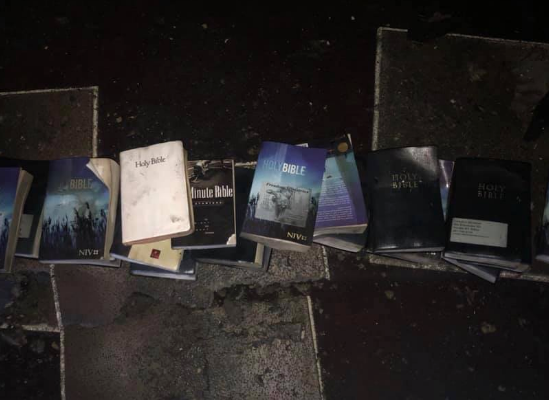 A fire razed a Virginia church on Sunday, March 3, but left the bibles and crosses inside untouched — a sight many netizens found quite miraculous.

The Freedom Ministries Church in Daniels, West Virginia caught fire around midnight of March 3, as per the Coal City Fire Department via Facebook on the same day.

“On March 3 around 12:58 a.m. our department was dispatched to assist Beaver VFD with a structure fire at the Freedom Ministries Church…” the department stated. “Though odds were against us, God was not.”

On March 3 around 12:58am our department was dispatched to assist Beaver VFD with a structure fire at the Freedom…

The fire department posted pictures from the wreckage and showed photos of the bibles untouched by the fire. Not a single cross was licked by the flames as well.

“Picture this, a building so hot that at one point in time, firefighters had to back out,” the department said. “In your mind, everything should be burned, ashes. Not a single bible was burned and not a single cross was harmed!! Not a single firefighter was hurt!”

The post has since gone viral, amassing almost 40,000 shares and around 36,000 reactions on Facebook alone. Many netizens have since given their take, with some chucking it down to divine power while others were not so convinced.

“It just goes to show that God’s word is more powerful than the devil’s fire and fury no matter how hot it gets,” wrote a certain Dean Vandall on March 4. “God was watching over all you guys last night…”

“And some say HE is only a myth!” commented a Sharon Brumfield-Bailey. “My house burned and the white Bible is still white and readable…”

Meanwhile, a certain Jennifer Stauffer, sang a different tune and wrote that books do not usually burn unless parted.

“The compression of the paper [leaves] no room for air to feed the fire,” she said. “Smoke damage and light burning on outside is normal.”

Another said that bibles burn slower or can withstand heat because of its outside material and thickness.

“Nothing to do with divine powers or other forces,” said one Jason Smalling on March 5. “It’s science…”

The Freedom Ministries church, on their end, has since posted a statement on their Facebook on March 3, saying they would have to rebuild.

“But we will be ok,” assured Freedom Ministries. “We will fight the enemy and not let him hold us down.”

We have a heavy heart this morning, our church had a fire last night. We will have to rebuild but we will be ok. We…

Members of the church were also invited to join in prayer and give support. JB