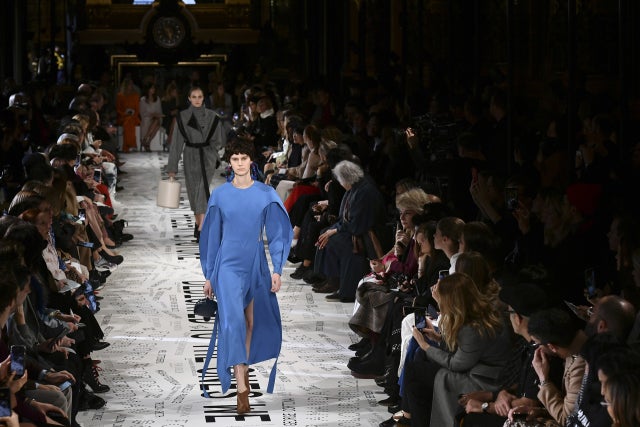 A model presents a creation by Stella McCartney during the Fall-Winter 2019/2020 Ready-to-Wear collection fashion show in Paris, on March 4, 2019. Image: Philippe LOPEZ / AFP

Stars turn out for Stella McCartney’s bid to save rainforest

Stella McCartney showed what can be done with upcycled clothes and fabrics in a classy Paris show whose front row was filled with celebrity fans led by Oprah Winfrey.

The British designer — a vegan who used the show to launch a #ThereSheGrows Instagram campaign to save the Sumatran rainforest — edged her big belted opening space samurai coat with her shiny “vegetarian leather”, a trick she repeated with some style throughout the collection.

Russian supermodel and philanthrophist Natalia Vodianova, now a mother of five, had an “SOS” Earth tattoo inked on her famously high cheekbones with other models carrying similar slogans such as “Green is the new black”.

McCartney has already recruited Hollywood stars Gwyneth Paltrow, Drew Barrymore and Rooney Mara as well as singer Pink into the #ThereSheGrows campaign, which involves dedicating a tree to someone special with a heartfelt message.

The show, in the gilded Belle Epoque splendor of the Opera Garnier in the center of the French capital, began with a voiceover of people dedicating trees to their loved ones.

Winfrey said she felt inspired to plant an oak in honor of her mother, Vernita Lee, who died aged 83 in November.

“I already have hundreds in my yard,” she added.

In a week when the Paris shows have been more attuned to what women actually wear than usual, McCartney used vintage fabric in a whole swathe of highly desirable dresses, although it was impossible to say what was new and what was not.

One multi-colored statement cord dress was made from vintage T-shirts that were stripped, knotted and then knitted.

A run of feature earrings were inspired by office paperclips.

Her husband Alasdhair Willis is the creative director of the Scottish heritage bootmaker.

The designer daughter of Beatle Paul McCartney told reporters backstage the Northern Soul music and dance movement that swept northern England from the late 1960s was also an inspiration for the show.

Winfrey told reporters she “loved the show and totally supported” the campaign to save the Leuser Ecosystem in Indonesia, one of the richest in the world where orangutans and the Sumatran elephant, rhinoceros and tiger are threatened by the spread of palm oil plantations.

The U.S. television mogul made the trip especially to support McCartney’s campaign, having last year admitted that “I worship her”.

Supermodel Karlie Kloss was also in the front row to lend her backing.

The designer also roped in the veteran American artist Sheila Hicks, draping several of her looks in her woven “twisted and wrapped adornments… so they could be worn like badges of honor for valor and bravery.

“These adornments act as wearable works of art,” McCartney added.

As well as the slinky ethnic-tinted glamour, she put 17-year-old catwalk star Kaia Gerber, the daughter of Cindy Crawford, in one of her new trenchcoat jumpsuits aimed at “empowering men and women to look and feel their best”.

It was the kind of garment that might give Formula One racing champion Lewis Hamilton, who now has his own fashion line with US brand Tommy Hilfiger, some ideas.

The driver was also on the front row and said he saw McCartney as a role model for sustainable fashion.

“My collection is 50 percent recyclable and eco-friendly materials,” he told the fashion industry bible Women’s Wear Daily, but his goal was to soon go 100 percent. NVG

Stella McCartney goes even greener with new charter and charity