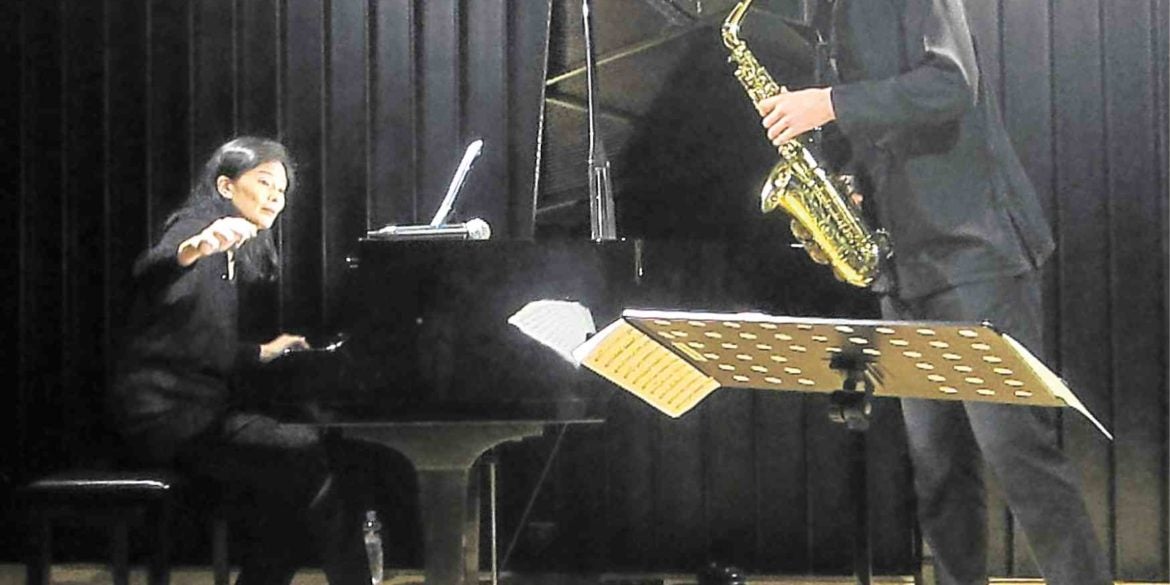 Nirvana’s lyric seems a better conduct and style statement for a rock spectacle than a piano-and-sax concert.

And yet we did show up in such a state—a li’l haggard from work, hair disheveled from the quick tricycle ride—one Thursday evening before the Season of Christmas Carmaggedon, for a night of French music with South African saxophonist Adam Campbell and the Philippines’ very own Mariel Ilusorio on the piano.

It was the launch of Les Jeudis Culturels, or Cultural Thursdays, staged by the Alliance Française de Manille at its 100-capacity concert hall. The venue was packed with expats, diplomats, yuppies, youngsters, of course the culturati, and then friends, and friends of friends, and curious folk enticed by the event’s TV announcement.

The monthly gig is meant to present different facets of French culture while incorporating something of ours.

Ilusorio, a first-prize winner in the 1985 edition of the National Music Competitions for Young Artists, or NAMCYA—an institution in discovering and developing local talent—was the lovely Philippine touch at the cultural event’s debut. She trained at New York’s Julliard School, Ohio’s Oberlin Conservatory of Music and Germany’s Hanover University. Her solo career spans three continents.

Piano and sax are not exactly standards for instrumental duets outside of jazz, although it didn’t seem to matter at the concert. The musicians explained the program just as eloquently as they played their instruments. How else could the audience—at least for the likes of us who lacked schooling in the appreciation of the music arts—have been so captivated?

Instead we not only learned that Paule was, in fact, a she, but also that her “Tableaux” (French for picture, image or representation) served as musical postcards of her Provencal memories.

In Ilusorio’s language, the five-piece suite translates to girls dancing to the farandole (a community “chain” dance that’s lively and happy); a serenade for a beloved; wild and fast like a wandering nomad, fiery as in the gypsy temperament; emotive melodies in remembrance of a dear cousin who passed away; bouyant, flexible, fast (musical) acrobatics a la stinger bee.

Campbell was no less expressive, even adding modern context to his openers.

“France’s fantastic victory [in the 2018 World Cup] was somewhat [dampened] by international… criticism… that most of the French football team aren’t actually French,” he said.

“This is a question many of us are asking ourselves, myself [included]. I now consider myself half South African and half French because living five or six years in another country leaves its mark on you as a person.  The color of your skin does not influence who you are. I say this because the following composer wasn’t actually born in France.”

That was how French composer Christian Lauba and his music were introduced. The Tunisia-born music-maker has become a fixture in Bordeaux, where he also resides.

Lauba’s work has been influenced by his North African roots, said Campbell, and yet it’s music that’s “now associated as a very French style.”

The first Cultural Thursday was an eye-opener with the fresh music experience, and learning the international (classical) music community’s sensitivity to issues about race and prejudice.

In this day and age, inclusivity should no longer be a stranger, just like in the hall that was packed with a motley bunch of people enjoying a little night of French music.