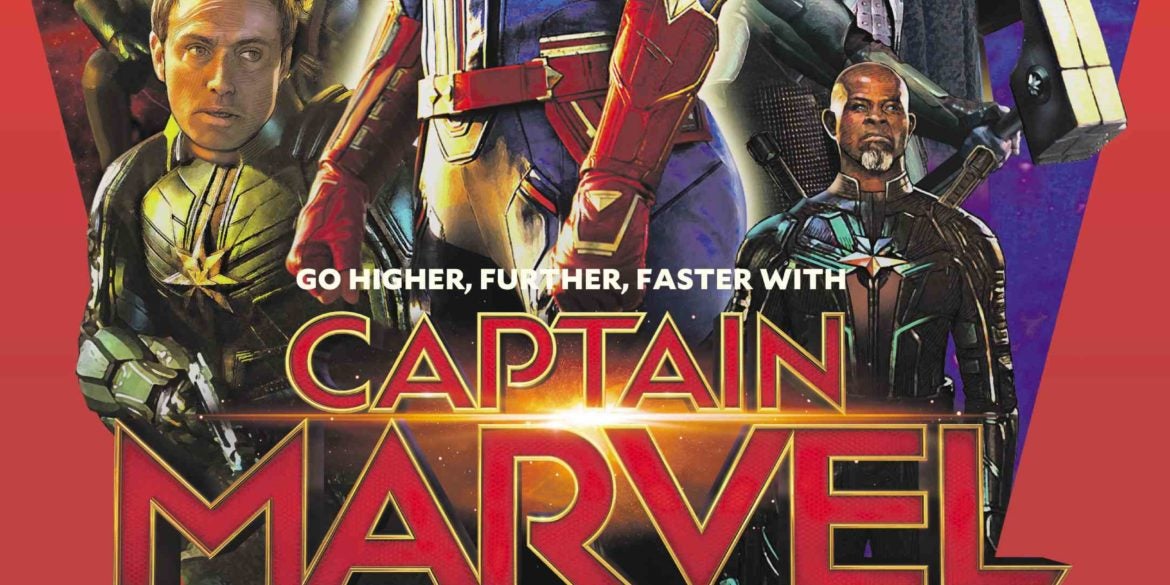 Who is the most powerful superhero in the Marvel Cinematic Universe (MCU)? Is it the Asgardian god of thunder, the Mighty Thor?  Is it the Gamma Ray-powered giant, the Incredible Hulk? Could it be the Sorcerer Supreme, Doctor Strange?

If one were to judge by the newest MCU movie, it would be none of the above. The answer is the same as the movie title: “Captain Marvel.”

Aside from having a name that is also the publisher’s name—Marvel Comics—Captain Marvel has always been a big cosmic player in the comic universe.  Created by Stan Lee and Gene Colan, the original Captain Marvel was a warrior named Mar-Vell from the alien Kree race and first appeared in 1967. He came to Earth and became its defender against interstellar threats. That’s how he met the human Air Force officer Carol Danvers, who was given powers in an explosion and became the hero Ms. Marvel in 1977. She was created by Colan and Roy Thomas. In 2012, Danvers took up the title of Captain Marvel.

Some parts of that origin were installed into “Captain Marvel,” but much of the film is new, a fresh adventure that serves to install Captain Marvel snugly into the MCU storyline—something valuable considering the Ms. Marvel character had one of the most complicated origins in all of Marvel Comics. We got our first hint of Captain Marvel in the post-credit scene of 2018’s “Avengers: Infinity War,” when Nick Fury (Samuel L. Jackson) managed to activate a pager before being dusted. On the pager’s screen we can see the symbol of Captain Marvel.

“Captain Marvel” brings us the rest of the story.

In the 1990s (check out that gorgeous ’90s–era soundtrack) , Vers (Brie Larson, who won an Best Actress Oscar for 2015’s “Room”) is a super-powered warrior who is part of the elite Starforce unit for the Kree. She is training on the Kree capital of Hala under the command of Yon-Rogg (Jude Law) and preparing to attack the Kree’s sworn enemies, the shape-shifting Skrulls.

But a skirmish gone wrong with the Skrulls leaves Vers on the backwater planet C-53 (also known as Earth) with strange memories of a life on Earth. These memories are strange because she had no memories until six years ago. She remembers a woman (Annette Benning) but not why.

As she hunts the Skrulls on Earth and awaits rescue by Yon-Rogg, she is befriended by a young S.H.I.E.L.D. officer Nick Fury (a digitally de-aged Jackson, still with two eyes) and she also begins to put together the pieces of a life she had on Earth—as Air Force pilot Carol Danvers. The Skrulls are led by the crafty Talos (Ben Mendelsohn from “Ready Player One”). Because of the Skrull shape-shifting ability, she truly doesn’t know who to trust.

But that isn’t the biggest surprise. With Fury’s help, Danvers discovers a secret that turns her universe upside down. It’s a very effective twist, and turns what could easily have been a derivative example of ubiquitous comic book movie-making into a genuinely distinctive character study—with laser blasts and starships.

In many ways, “Captain Marvel” is a self-contained movie, unconnected to the MCU continuity save for the presence of the raw Fury. But as the action-packed movie makes its turn toward  the finish, it starts to connect with the MCU continuity with ferocity.

“Captain Marvel” has space-set action scenes on the same level as “Guardians of the Galaxy,” except that here, it’s just one character doing all the damage. It’s directed by the dynamic duo of Anna Boden and Ryan Fleck.

Aside from Larson, Jackson, Law and Benning, “Captain Marvel” also features turns by Djimon Hounsou, Gemma Chan, Lee Pace (returning as the Kree Accuser Ronan from the first “Guardians”) and a similarly de-aged Clark Gregg as the fan-favorite S.H.I.E.L.D. Agent Coulson from so many Marvel things.

There are many reasons why “Captain Marvel” is important. Yes, it is the first MCU film directed by a woman, starring a woman solo in the movie title.

But there are two other important reasons. First, it introduces the most powerful good guy in the MCU thus far. Captain Marvel is super-strong, can fly, fire photon blasts, and breathe in space. She’s also noble and dedicated.

The other is that the film fills in a gaping hole in the run-up to this year’s “ Avengers: Endgame.” One has to see the film to see why, something that’s only fitting for the 21st MCU movie. How does she fit into the battle against the nigh-indomitable Thanos?

“Captain Marvel” is the first MCU film to have an Oscar winner in the lead. Larson is fun and fierce in the lead role.  Anyone who’s seen her in “Room,” 2017’s “Kong: Skull Island” and 2010’s “Scott Pilgrim Vs The World” knows she has range. She attacks this role with gusto and a wry energy that’s quite winning. Danvers provides the story-heavy part of “Captain Marvel,” and Larson fits the bill. But she’s not alone.

This is as much Jackson’s movie as Larson’s. “Captain Marvel” serves as kind of a low-key origin for Fury’s character as well. This is the most exposure the Fury character has had in any MCU flick. He and Larson have great chemistry together and their buddy comedy banter is one of the best things about the film.

Also: Do not miss the mid-credits scene!

It’s no “Black Panther” or “Captain America: The Winter Soldier.” If you tune out all the internet noise, you can see that “Captain Marvel” is a perfectly solid space spectacle that balances the loud action with sneaky humor. It’s a great actioner that leads up to the much-anticipated “Avengers: Endgame” and speaks about the ever-rising ambitions of Marvel Studios.