In Albania, a sole Jewish history museum on the brink | Inquirer Lifestyle 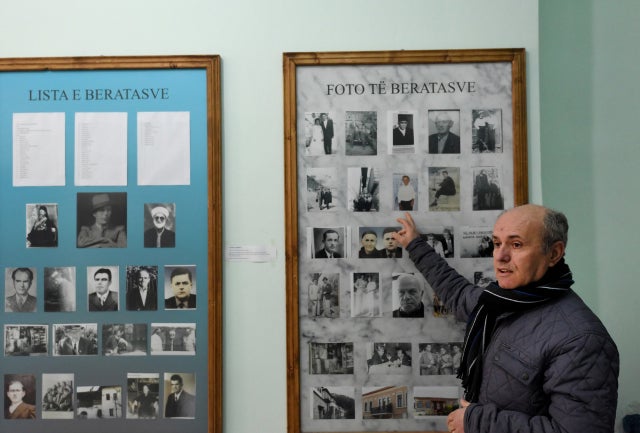 Nazir Ago, curator of the Solomon Jewish history museum in the Albanian city of Berat, stands at the museum on February 6, 2019. The Balkan state is the only Nazi-occupied territory whose Jewish population increased during World War II, thanks to the bravery of ordinary families who harbored thousands of refugees fleeing persecution during the Holocaust. The tiny Solomon Museum, which opened in the city of Berat last year, was a labour of love for local historian Simon Vrusho. But his death last month at age 75 has put its future at risk, with rent only paid through to April. Image: AFP/Gent Shkullaku

In Albania, a sole Jewish history museum on the brink

On a sloped, cobblestone street in southern Albania sits a small shop, empty except for a dozen framed panels on the walls bearing photos and stories from 500 years of Jewish life.

It may be modest but this is Muslim-majority Albania’s only Jewish history museum.

And the story it tells is exceptional: the Balkan state is the only Nazi-occupied territory whose Jewish population increased during World War II, thanks to the bravery of ordinary families who harbored hundreds of refugees fleeing persecution during the Holocaust.

The tiny Solomon Museum, which opened in the city of Berat last year, was a labor of love for local historian Simon Vrusho.

But his death last month at age 75 has put its future at risk, with rent only paid through to April.

Until now he had covered the museum’s costs with his pension and small donations from a box by the door.

“Memories need to have their own home,” Vrusho, a wiry man with warm eyes, told AFP, shortly before he died following a heart attack in February.

He spent years harvesting documents, photos and memories bearing witness to a Jewish community that first arrived in Berat in the 16th century from Spain.

At the centre of the collection are the stories of Muslim and Christian Albanians who sheltered Jews in their homes and basements during the Holocaust — a chapter of history that has only recently become more widely known.

When Germans took control of Albania in 1943, local authorities also refused to hand over lists of Jews inside the country.

Thanks to these quiet acts of heroism, the country’s Jewish population surged from several hundred before the war to more than 2,000 afterwards.

And, according to Israel’s Holocaust memorial, Yad Vashem, “almost all Jews living within Albanian borders during the German occupation… were saved, except members of a single family,” who were deported and all died except for the father.

Another family was also deported and survived.

When asked to explain this history, Albanians will say it lies in “Besa” — a cultural code of honor to “keep the promise” at any cost.

There is also a rich history of religious tolerance in a country with a tapestry of different faiths, visible in Berat where a church and mosque face each other on the same square.

Inside the museum, Nezir Ago, a 40-year-old artist, points to a faded photo of an elderly man.

“This is my grandfather,” he says, explaining that the Muslim baker took in a Jewish family of three in the early 1940s.

“He did not know them before… or have an obligation to shelter them,” he adds.

The photo sits alongside several dozen others from the more than 60 families in Berat who rescued Jews, making the city a hub for refugees during the war.

A list of some 600 names of those rescued identifies the European countries they hailed from — many from Balkan cities like Belgrade or Pristina, where Jews were brutally exterminated by Nazi-allied powers.

The Albanian families who took them in were “Christian and Muslim, rich and poor,” says a caption taped to the wall.

They were “deeply, unimaginably humane” people, recalled Vrusho, an Orthodox Christian who spent years interviewing Berat elders for their stories.

After World War II, Albania fell into the clutches of a communist dictatorship that barred religion.

When the regime collapsed in 1991, many of the remaining Jewish community left for Israel.

Marilena Langu Dojaka, 77, is one of those who stayed.

“We are not yet free of our fears,” she says, of the terror that has stuck with her decades later.

She was born in Albania in 1942 after her mother fled there from then-Czechoslovakia.

They found refuge with a family in the northern town of Mat.

“When the Nazis passed through the village… our host family hid us in the mountains, in a cellar until the danger had passed,” she told AFP, welling with emotion.

Clutching a framed photo of relatives her mother left behind, she says softly: “They all died in the camps.”

Dojaka has kept close ties with the Albanian family who protected hers.

“They shared everything with us: bread, pain and joy.”

It wasn’t until after the fall of communism that the stories of the role played by Albanians in protecting Jews came to light.

Today some 75 Albanians are recognised as part of the Righteous Among The Nations — those who took great risks to save Jews during the Holocaust.

The history is a growing source of pride in Albania, where the government holds annual events on Holocaust Remembrance Day and devotes an exhibit to the history in Tirana’s national museum.

But Vrusho’s museum is the only standalone center dedicated to the sweep of Jewish history in that corner of Southeastern Europe.

Since it opened in May 2018, there have been several thousand visitors from around the world.

If he had more means, Vrusho said he would have opened a museum “double the size.”

Now, his widow Angjlina says she is “very worried about the museum’s fate.”

“It took him a lifetime,” she said through tears. CC