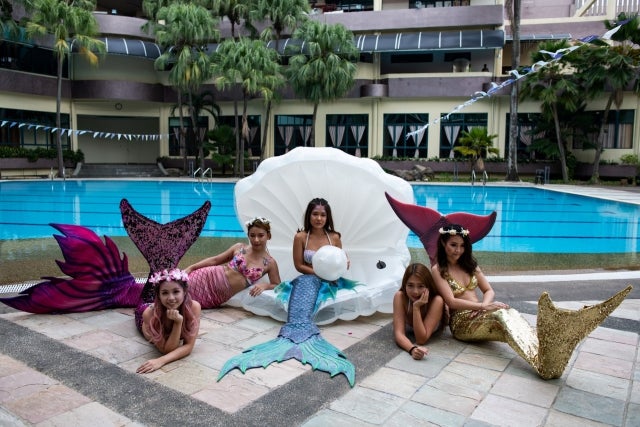 This picture taken on February 25, 2019 shows swimmers Teo Jia Yin, Chan Yushi, Naomi Wong Jiag, Koh Yi Xuen, and Teo Jia Qinposing posing wearing their mermaid tails before a swim in a pool in Klang, on the outskirts of Kuala Lumpur. Donning tails that wrapped around their legs up to their hips, five bikini-clad women are part of a small but growing trend of recreational swimming that allows enthusiasts to swim like fishes. Image: AFP/Mohd Rasfan

Wearing tails made of plastic fins covered by shimmering fabric, five women glided through a pool at a Malaysian center that teaches people how to swim like mermaids.

The academy, in the coastal town of Klang, southwest of Kuala Lumpur, is among several that have sprung up around the world to cater to the growing popularity of swimmers emulating the mythical creatures.

The students — wearing bikini tops as well as their mermaid tails — circled underwater and did somersaults, all the time trying to keep their eyes open.

“It’s quite tough,” said Koh Yi Xuen, who is 27 and has been learning the special swimming technique for about three years. “We have to open our eyes in the water, and our legs are tied up.”

Lee Boon Leong said he started offering the lessons at his swimming academy after a company approached him and asked to hire someone who could swim like a mermaid for a product launch.

The school, which now has five instructors, has taught about 500 women to swim like mermaids.

Lee said it is possible to learn the basics in about 16 hours of classes over three months.

Mermaids, which have the upper body and head of a woman and the tail of a fish, are creatures from folklore.

The Disney animated classic “The Little Mermaid”, based on the fairy tale by Danish author Hans Christian Andersen, spurred new interest in the creatures and the way they swim in recent years. CC

How Tagbanua tribesmen protect the ‘mermaids’ of Palawan