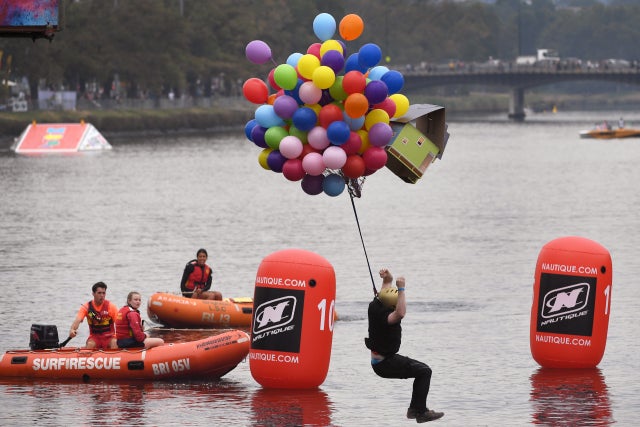 A competitor jumps into the Yarra River with his homemade flying device during the annual Birdman Rally at the Moomba Festival in Melbourne on March 10, 2019. Image: AFP/William West

Strapped to homemade flying devices shaped as gliders and even houses, competitors jumped into a river in the heart of Australia’s second-largest city Sunday as part of a quirky annual competition to raise money for charity.

While the goal is to stay in the air for as long as possible before plunging into the river, contestants are also judged on their costumes, pre-jump performances and how much they have raised for their nominated charity.

This year’s winner Mark Rees, who managed to jump seven meters (23 feet), literally had his charity strapped to his back.

Rees raised just over Aus$16,000 (US$11,300) to support a water filtration system for schools in Asia-Pacific developing nations, with the donations to be matched by his local rotary club in Melbourne.

The filtration device is called a “SkyHydrant”, a white rocket-shaped object about half his body length.

“It’s very exciting. As you walk up there and there’s pyrotechnics going off and music,” Rees told AFP after his plunge into the Yarra.

“It’s just a wonderful event and… it’s what Melbourne is all about.” CC