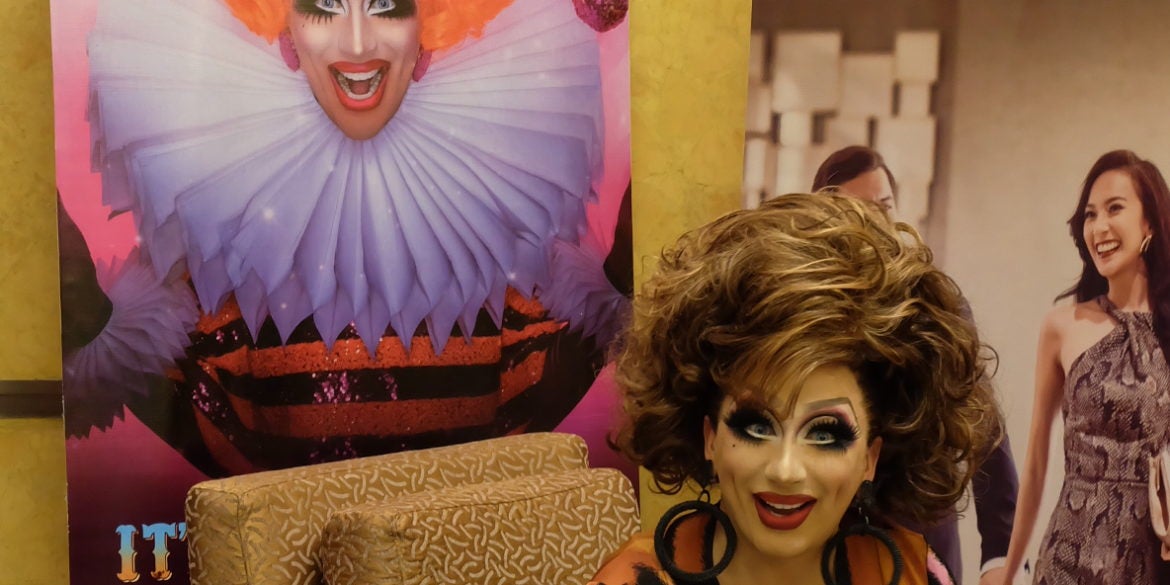 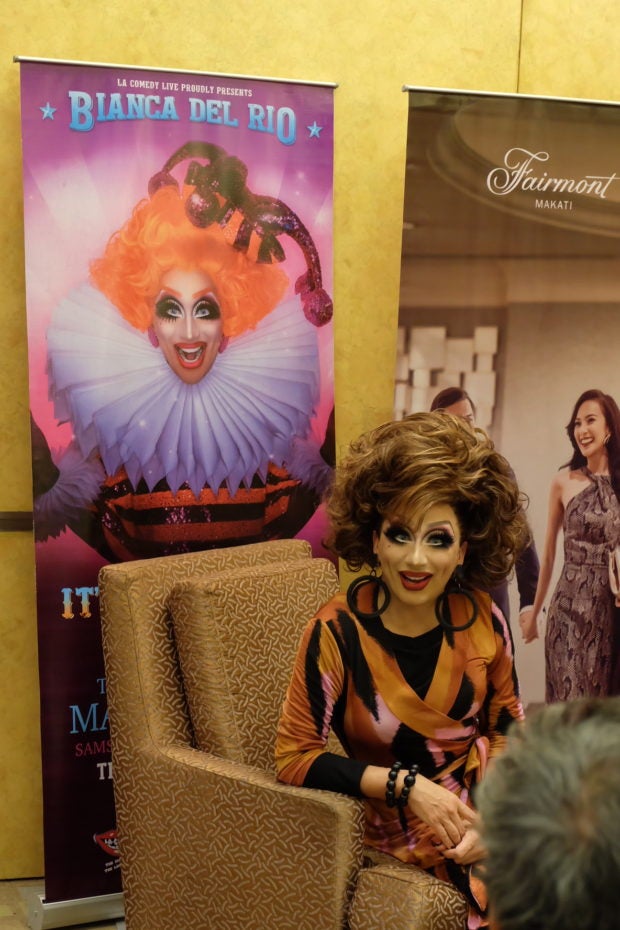 They call her the Joan Rivers of the drag world. Bianca Del Rio, alter ego of Roy Haylock, winner of the sixth season of “Rupaul’s Drag Race” and queen of insult comedy, is in the Philippines for the first time for her brand new show “It’s Jester Joke,” happening on March 12 and 13 at Samsung Hall, SM Aura Premier.

It was supposed to be a one-night engagement but tickets sold out so fast they had to add another date. Bianca says people who will watch her show should expect the unexpected.

“I do have a script that I go by but with the audience, it depends on what happens when you’re there. You never know what you’re going to get. The more I drink, the funnier it is,” she said at the press conference on March 11. “I always say expect the unexpected but since I’m in Manila I have to talk sh*t about Manila. Not you, I meant Manila Luzon.”

Bianca and Manila Luzon, the half-filipino drag queen who fans have seen on “RuPaul’s Drag Race” Season 3 and “RuPaul’s Drag Race All Stars” Seasons 1 and 4,”have known each other for 15 years. “It’s so funny because we fight on Twitter, Manila and I. There’s a few queens you can cackle with online and she’s one of them. I’ve known her for 15 years now. We go back and forth and all the people online go crazy. ‘I can’t believe you said that.’ ‘That’s so rude.’ ‘You’re just a b*tch.’ Yeah, yeah and yeah. I know I’m a b*tch.”

Bianca lent Manila some dresses when Manila was preparing to appear on “All Stars 4.” “The b*tch never f*cking returned them. I’m gonna see her soon. I’m gonna get them back. She’s wearing my sh*t. If you actually scroll, you’ll find photos of me in it. But she called me up and she goes, we have a clown challenge and I would like to wear you. Okay. So I gave her two dresses and she’s kept them ever since.”

If you’re gunna be a clown, be THE CLOWN! 🤡 Thank you @thebiancadelrio for lending me your dress! I promise I’ll return it whenever you’re home from your “It’s Jester Joke” tour! 🧡💕 bicorne hat by @artdefashion photo by @vicovelezphotography Pre-order my new album “Rules!” in iTunes: link in bio

The feeling of 50 Bianca Del Rios judging me for all our jokes not being HATEFUL enough for her liking! 😂🔥😂🔥😂 JOIN US TOMORROW IN BUFFALO NY: @mppresent

Bianca has also known Jiggly Caliente, a Filipino-American drag queen who appeared in Season 4 of “RuPaul’s Drag Race,” for 15 years. Jiggly has been tweeting in Filipino, asking fans to welcome Bianca to the country in really odd ways (like throwing balut at her). Bianca said, “Oh god, Jiggly. She has been saying sh*t online and it hasn’t been in English…  I don’t know what any of it means. I’m worried tomorrow that they’re all going to attack me.”

A reporter asked Bianca if she was familiar with Filipino humor. “Oh I’m not. But you sent me two jokes like those two to come to America. One can’t stop eating and one can’t win a drag race. I mean, third time’s not the charm,” she said.

If yesterday’s interview is a sign of what’s to come, those with tickets to “It’s Jester Joke,” are in for a real treat. Bianca is hilarious. Here are some more highlights from the funniest press con we’ve ever been to:

Bianca’s thoughts on the scene-stealers of Season 11 (yes, we mean Soju’s cyst and Mercedes’ stroke):

“I find it funny when when your ailment is stronger than your talent. This is a show about drag queens, why are we talking about a cyst on your taint? I don’t understand. You don’t want to know what’s going on into my skirt. I’m not gonna tell everybody…  It’s a television show so the sympathy aspect comes in. I don’t live by sympathy. Sympathy is not a part of my drag aesthetic. If you’re dying, I’m going to go, ‘Hmm, okay.’ But I do find it quite amusing that we’re in the second week of the show and one week was (the cyst), the next week was a stroke. I’m like, ‘Well, what the f*ck is coming next? Where do we go from there?’ Are we taking America’s Next Patient? I just don’t understand.”

“I’m on a stage by myself. This is my fourth tour that I’ve traveled the world… I’m doing stand-up comedy in drag. I’m not lip synching. I’m not doing death drops. I’m not doing musical numbers, backup dancers. God knows you don’t want to see that. I leave that to the other people.”

On RuPaul and Michelle Visage:

“I remember being a child and seeing Ru on the MTV Video Music Awards. I was in high school and and she was this huge blond glamazon. I went, ‘Wow.’ She was fabulous. Never in a million years did I think I would meet him or be on the show. And you sit back and you go, ‘Wow, it’s kind of cool’. We don’t go to lunch because she doesn’t return my calls, but I do get to go to lunch with Michelle Visage and she eats like Jiggly.”

Oh, this outfit? Jetlag, haven’t slept, just showed up look. This is express lady look. I had to get ready quickly.

On enjoying her success:

“Obviously, drag is bigger than it’s ever been and I’m super grateful for the opportunities. But I’ve done drag for 23 years now so to have this great moment later in my life… I mean, the beginning was great, too… but I think to have this exposure now has helped me as a person because I can appreciate it more rather than being a 20-year-old and being an a**hole like Aquaria. I’m kidding. No, but I find that I enjoy it more. And I’m grateful for the opportunity to travel the world. I don’t think I ever would have been here in Manila, if I wouldn’t have had the opportunities that I’ve had. So it’s been pretty amazing.”

On social media and drag queens:

“Well, it made them seem talented. There is a talent in taking a good picture…  I think the show is different because the world has changed. I mean, Instagram is huge. A lot of queens now are doing the show because they grew up with the show… These are young performers that watched ‘Drag Race’ and thought, ‘Oh, this is what I want to do.’ I mean, Aquaria is like 23 or something and it’s pretty amazing what she’s accomplished at 23 years old. Who knows what’s going to come in the next few years? It is pretty fascinating the opportunities that exist and you don’t realize how many people are watching the show, or how many people are interested in what you’re doing. It still blows my mind that anybody gives a sh*t about what I’m doing. And I’m not even putting out the gorgeous photos like Aquaria or Violet who are beautiful and that’s what they do. You know, I am the exact opposite.”

When we couldn’t stop taking photos:

“You have 82,000 pictures, don’t you have enough? I look horrible. I’m gonna untag myself in every single one of them.”

On the possibility that the Philippines is a country full of Jigglys:

“The show has gotten bigger over the years. And I think that that globally, I’ve been fascinated because it wasn’t just Manila that shocked me but I’ve also done South Africa, which was insane to me. And obviously, all over Australia, the UK and Europe. I sit back and I have those moments when I go wow, is this really life, like, am I really here? I mean, I don’t know if I’m really here because I’ve been on pills… But it is pretty amazing, the global interest in the show. I’m grateful anytime anybody wants to hear what I have to say. I’m actually looking forward to it, unless the whole country is like Jiggly, then we’re f*cked.

When a fan told her meeting her was his dream:

“You need to get better dreams. If I’m your dream, you’re f*cked.”