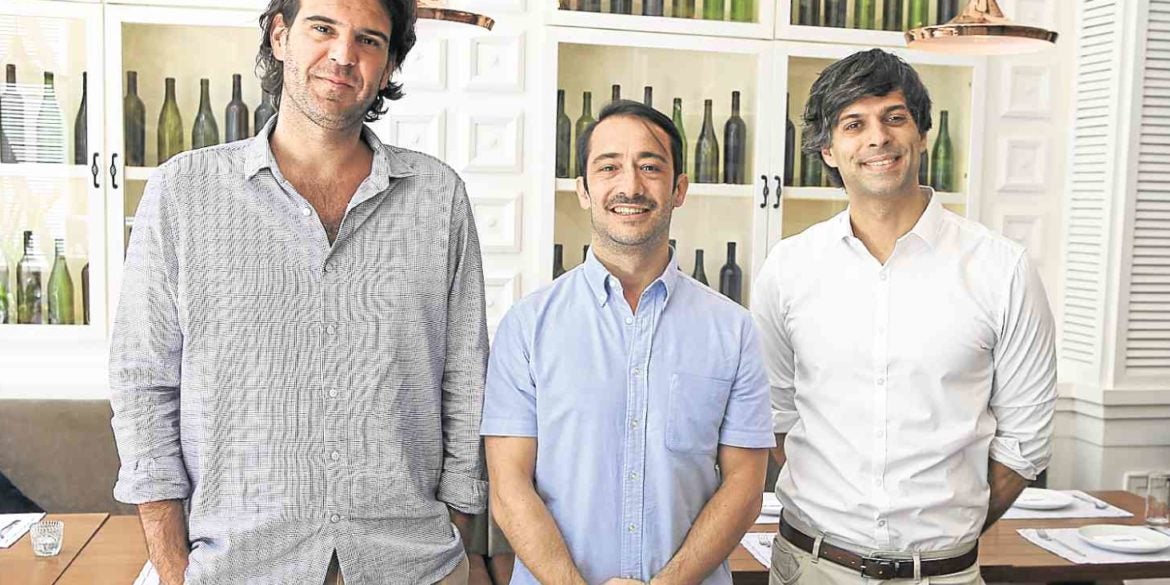 Three men from Barcelona: Beating the odds–with no formula

Dani Aliaga, Sergi Rostoll and Uri Singla always like to take chances. Having thrived for 13 years in the local food and beverage business, their restaurant group continues to take risks. With seven successful brands under their belt, the gamble seems worth it.

On their final year in school, buddies Aliaga and Rostoll were already toying with the idea of going to the Philippines, mainly for football.

“Sergi was based in Hong Kong in high school and he would spend summer breaks in the Philippines,” recalls Aliaga. “He went back to Barcelona for university. We met and he told me that the Philippines was fun. Beyond that, I knew nothing else.”

Helping cement their decision to move here was an offer to buy Barcino Gourmet, a deli store of Spanish goods like cookies, Cola Cao  and cologne. “We said, why not? We got to save a bit, we said, let’s give it a try. So, we, along with other partners, bought it.”

In July 2006, Rostoll went to Manila to look into the start-up, while Aliaga finished his stint at the front desk of a hotel. When Aliaga finally flew to Manila in September 2006, Rostoll picked him up at the airport and drove him straight to Megamall where a Spanish fair was going on.

To his surprise, Aliaga was asked to go onstage and talk about the regions of Spain. That was his baptism of fire. Right after, he and Rostoll went to the Barcino deli at City Golf Plaza on Julia Vargas Avenue, Ortigas.

Another surprise welcomed him—there was not a single car in the parking lot. It was a tough and disheartening sight.

Young, fresh out of school, and with zero experience in entrepreneurship, they persevered, knowing they risked a lot when they left their native country.

The guys decided to turn Barcino into a wine bar—removing the two big shelves in the middle of the room and replacing them with two barrels with a glass table top. When people found out that they could have a good, reasonably priced bottle of wine in the shop, they finally came, but not in droves.

Then an opportunity arose. After six months of operations, their next-door neighbor, Aranaz, moved out. Barcino took over the space and went from four tables to 15. “We told ourselves, it’s a now-or-never thing. If we do this and we do well, great. If not, then we go back to our country,” says Aliaga.

Not long after, there was a queue of wine drinkers outside the door. “We were pumped,” he says. “We didn’t expect that at all. When we got to fill up the bar, we realized that we couldn’t just be relying on wine. So, we started offering food.”

Their humble wine bar did so well, they were able to afford a second outlet—in Bonifacio Global City. “Everyone said it was a crazy idea since we would be the only food establishment in that area at the time (Forbeswood Heights, fronting a parking lot). We decided to see where it goes. Fortunately, that became the tipping point of our business.”

It was such a hit that led to three more outlets—Greenbelt 5, Rockwell  and Alabang. As the business turned self-sustaining, the two friends wanted to do something else, and though they were still part of the group, they decided not to be hands-on anymore. Aliaga joined a local hotel group, while Rostoll left for Shanghai to work for a wine company. Eventually, they sold their shares at Barcino.

In 2011, on his way to Barcelona, Aliaga came up with a business plan for a restaurant under a new company, the La Lola Group. He, Rostoll and Singla, who had graduated from university by then, wanted to open a wine and cocktail bar set in a modern environment. Pimenton was the original name, but it changed to what is now known as Las Flores.

Las Flores was located in BGC, in a space away from the neighborhood where other businesses had folded up. On opening day, typhoon struck the city, with chairs flying off the terrace and only two staff members reporting for work. The odds were definitely not on their side, but still the restaurant opened.

Luckily, people came—and continued to come long after the storm had gone. Las Flores has thrived since it opened in 2012.

“After a year, we wanted to launch a concept that went deeper into the food business, and offering something that was closer to home,” says Aliaga.

In 42 days, they set up Rambla at Rockwell in Makati, with food from their native Barcelona. Again, they struck gold. Their restaurants got so busy that it forced Aliaga (Singla spearheaded the two brands) to quit his job and devote time to the La Lola Group.

In October 2014, they were offered a tiny space at Power Plant Mall. Only 9 sqm, it was just right for an idea they had been toying with—a churros shop.

In December 2014, Churreria La Lola opened with just three employees. Aliaga manned the cash counter, Rambla’s executive chef fried the churros, and they hired another hand to assist. In three weeks, the shop saw droves of customers. “We were caught off-guard and were so overwhelmed. We even ran out of flour!” Aliaga recalls.

When Rostoll saw that the growth of La Lola was faster than expected, he left China to join the group full time. La Lola now has 16 branches.

In 2016, another lucky break came. “When we had control over La Lola, I worked on my computer and did a business plan again,” Aliaga says. “We wanted a restaurant that wasn’t as serious as Las Flores and Rambla, something more playful, and P200 cheaper. The original name was Chiringuito (beach bar in Spanish). Then we said, why not just open Tomatito? We said, oh yeah, why not?”

Opening in December 2016, it was a success and enjoyed a buzz.

Chef Willy Trullas Moreno, who has restaurants in Shanghai and Hong Kong, is a good friend of the team and their partner in Tomatito. “We got along really well and we wanted to work together since we were all from Barcelona and had the same energy,” says Aliaga.

Las Flores turned five in 2017 and given its consistent growth, they thought of expanding the brand. They were offered a prime location at Podium, by the entrance and with floor-to-ceiling glass windows. In November 2017, the group opened its first mall restaurant.

“We’re finally back where we started,” says Aliaga. “Ortigas gave us everything. It was our trampoline to do things. We’ve always had that romantic connection with the city and so we’re thankful for that chance.”

In 2018, they realized that they had no restaurants in Makati. There was Rockwell but they considered the area a community in itself. The opportunity came when the owners of The Girl and the Bull restaurant, their good friends, decided to give up their space on Bolaños Street in Legazpi Village. The La Lola Group took over and last June opened BCN, which focuses on charcoal cooking.

Last September, they launched Rambla Catering to address inquiries from the market. Last November, they turned La Lola Glorietta into a café, serving Filipino breakfasts and pastries, apart from churros. They also introduced Bar Centrale, a pasta bar, since, as Aliaga notes, “I think we have covered Spanish cuisine a little too much already.”

Next month, they will open Osteria Daniele, an Italian restaurant, in the mode of Las Flores and Rambla.

Though there are many brands in the group, their common thread is the sophistication of their cuisines’ flavors. For instance, foie gras is married with pineapple jam and turned into empanadas, mussels with béchamel sauce, churros is stuffed with banana Nutella, strawberry is turned into gazpacho, lechon goes with peach chutney, and cochinillo is served on top of paella.

“There is a bit of everything,” says culinary director Rostoll. “There are the traditional done well with classical recipes, and there are also the fun dishes, which allow us to play around with ingredients that are available locally.”

Their menus keep on evolving. “We keep changing, improving, and redoing the menus 2-3 times a year. We also have monthly specials and study how the next menu will look like, considering which dishes sell or don’t. We try to offer the best dishes possible at the right price.”

The La Lola Group, which has brought in new partners and changed its name to Bistronomia, continues to grow year after year, establishing itself as one of the more formidable restaurant groups in the country.

“I didn’t come to the Philippines thinking I would live here for this long or forever,” says Aliaga. “I was just a foreigner going to another country for work experience.”

It was a gamble for him to leave Spain in 2006. But, with friends and business partners Rostoll and Singla, the gamble paid off.

“I feel so happy here,” says Aliaga. “I feel like I belong here. The Philippines has shaped me. I feel a very strong and real connection with the county. My worst and best moments have been here. And I wouldn’t have it any other way.”–CONTRIBUTED