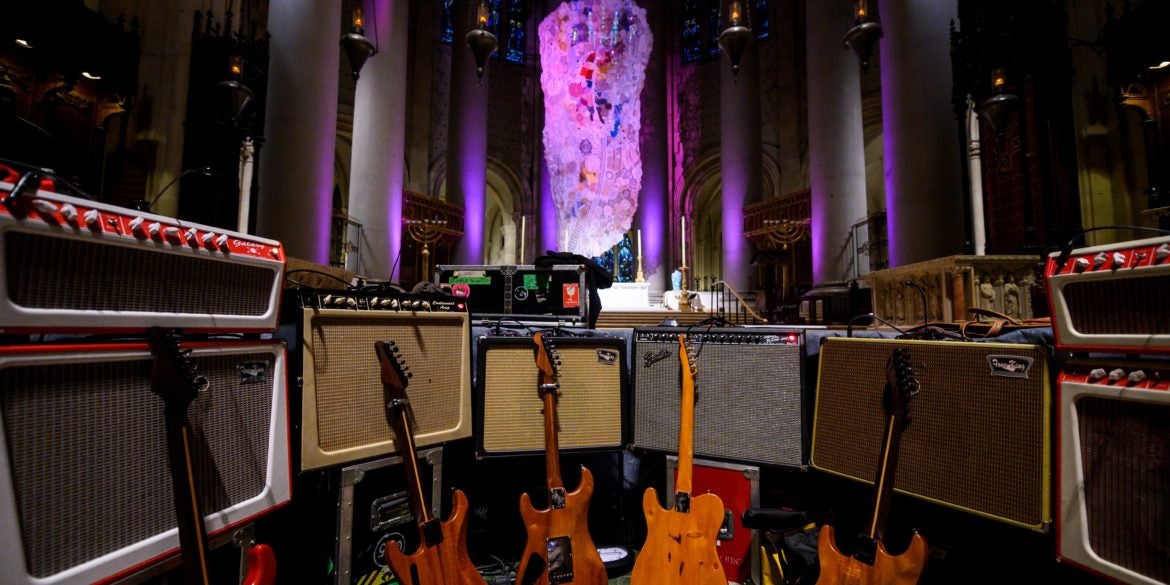 Guitars and amps are seen in the Cathedral Church of Saint Johan the Devine before the concert "Lou Reed Drone" on March 13, 2019 in New York City. - As his acclaimed "New York" album turns 30 the guitars of late rock pioneer Lou Reed are still reverberating in his beloved hometown, giving deafening soundbaths to those seeking refuge. On March 13 Reed's wife Laurie Anderson brought the icon's "drones" -- openly tuned guitars propped against amplifiers to produce ear-splitting, unpredictable sounds -- to New York's Cathedral of St. John the Divine for a free, public performance. (Photo by Johannes EISELE / AFP)

As his acclaimed “New York” album turns 30, the guitars of late rock pioneer Lou Reed are still reverberating in his beloved hometown, giving deafening soundbaths to those seeking refuge.

The show was part of the cathedral’s contemporary exhibition “The Value of Sanctuary,” which features works from some 30 artists exploring the notion of refuge and social identity in times of upheaval.

Calling Reed one of the first “noise artists” who “got a little bored with notes,” Anderson said after his death she and others in Reed’s inner circle began doing drone performances in churches, theaters and at music festivals everywhere from New York to Tanzania to showcase his love for “extreme volume” — and its meditative qualities.

Reed — known for his poetic lyricism and deadpan delivery — began creating such drones during his days as the frontman of the massively influential band The Velvet Underground, rock experimentalists who worked with pop artist Andy Warhol.

“It’s so symphonic and so beautiful,” Anderson said. “It’s a kind of music that’s very complex.”

The drones rang out in the enormous cathedral — large enough to lay the entire Statue of Liberty lengthwise within its walls — for some five hours.

They were accompanied at the start with organ music before Anderson and other collaborators began chiming in with instruments including drums and violas, as onlookers filled the cavernous space for a sonic massage.

“It gets into your body somehow,” Anderson told AFP just prior to the performance. “It’s so loud, it’s relaxing.”

“It fills you, and you become defenseless,” said the 71-year-old multimedia artist and electronic music trailblazer. “And that’s a nice feeling in this world.”

The concert is part of the 77th birthday celebration for Reed, who died at age 71 in October 2013.

And part of memorializing the artist — known for hits including “Walk on the Wild Side,” “Dirty Blvd” and “Perfect Day” — is celebrating his birth city New York, according to Anderson.

“Here, you’re an insider right away,” Anderson said of America’s largest cultural metropolis. “You don’t have to look at this edifice that people have made to protect themselves and their culture. You don’t have to spend your life fighting and knocking on that door.

“You’re in. I love that about New York.”

The New York Public Library acquired the avant-garde rocker’s archive, and will soon unveil a library card featuring his likeness that will be promoted particularly to kids in the city.

“He wouldn’t want white-gloved archivists” handling his things, Anderson said: “Anyone can go into the library and listen to what Lou did or made.”

She and other friends of Reed are also working to finish a book about tai chi the rocker started.

But his third wife Anderson — Reed’s partner for more than two decades after the pair married in 2008 — said she’s “not into trying to make Lou eternal or something.”

“He already did that — he’s in people’s hearts who love his music,” she said. “And then they’ll forget and there will be other music.”

“But for the moment, it’s a nice thing to celebrate. I love birthday parties,” she said with a laugh. “Only the main guest isn’t here, except only in spirit.”