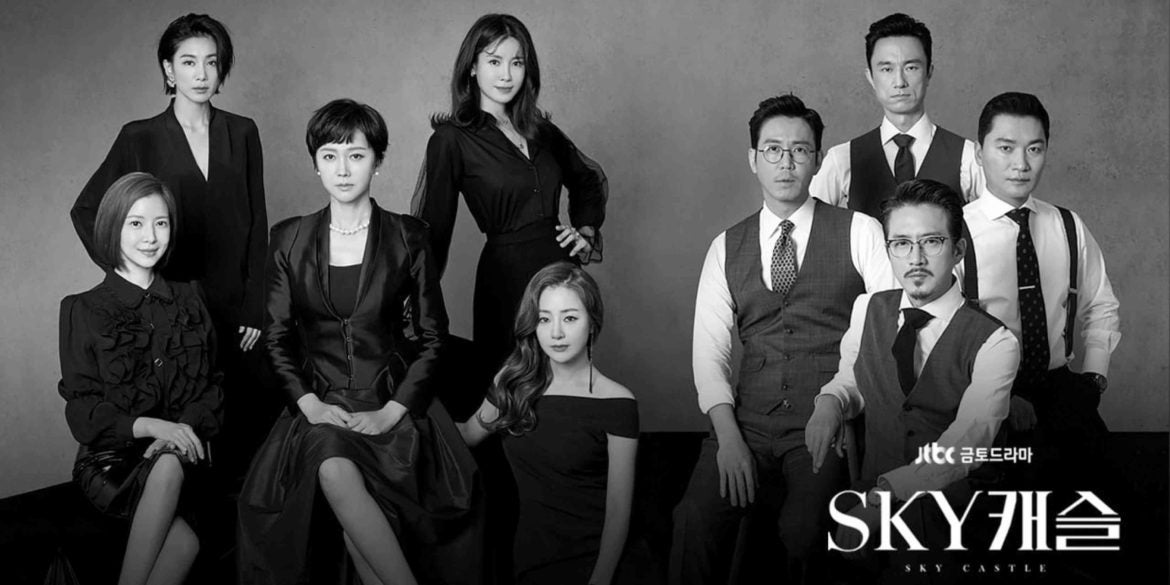 Deliciously grim South Korean dark comedy has scandals, deaths, and a villainess worthy of a thousand and one parodies

Barely had the first quarter of 2019 reached its halfway mark and already K-dramaland had released a towering, haunting masterpiece in “SKY Castle.” Produced by South Korean cable network JTBC, the 20-episode series is sophisticated, relevant (read: controversial) and beautifully acted by a phenomenal cast of industry vets and young performers.

The drama’s fictional Sky Castle refers to an exclusive township of rich, pedigreed families, though wealth alone doesn’t guarantee free (lifetime) residence in one of its billion-dollar cribs. That privilege is earned by virtue of having a head of household in the medical or law profession, and employed, even in a teaching capacity, by the prestigious university-foundation that established and owns the Castle.

In real life, SKY is an acronym South Koreans use to refer to their country’s top three schools—Seoul National University, Korea University and Yonsei University—which have produced the most elite, the crème de la crème of society.

Acceptance alone has become a gateway to career success as well as a spot among the in-crowd, which makes admissions very cut-throat, and the means to get there high-pressure, ridiculously expensive and therefore inaccessible to the nonaffluent.

Penned by award-winning female screenwriter Yoo Hyun-Mi, “SKY Castle” boldly takes the bull by the horns as it satirizes the Korean education system, scrutinizing its effects on people and society from the viewpoint of the 0.1 percent of the population that can afford the multiple hagwon (Korean for private academy/institution or cram school), private tutoring and undergrad admissions coaching services, among other purported stepping stones to SKY.

Critics and viewers have pointed at the show as a resounding commentary of the times. (We think it could even be a foreshadowing of the recent Ivy League colleges admissions exposé in the United States.) And it’s also relatable for its eye on parenting—how hard it can be even for full-time moms, especially those with husbands who think housewifing equals servitude.

Which brings us to our next point: “SKY Castle” may have been dubbed a “rich housewives drama,” but it’s one that slays the Hollywood competition, HBO’s “Big Little Lies.”

Besides the dynamics between a resplendent Nicole Kidman and the hot but viciously creepy Alexander Skarsgard, what else about women empowerment resonated from that US miniseries? Apart from the star-studded cast, what elevated “Big Little Lies” as absolute-must-see TV?

Stars also populated “SKY Castle,” but they shone alongside their young counterparts.

The actress Yum Jung-Ah, in particular, delivered a bravura performance as the greedy, education-obsessed mom Han Seo-Jin. She’s made of steel, capable of duplicity and hating to the point of vengeance, but when she discovers a living remnant of her husband’s One True Love, she scrambles in the dark of night to a room with a wide window onto which she screamed a silent scream that expressed the kind of agony no real scream could.

Seo-Jin is one of TV’s ultimate anti heroines (up there with Sandra Oh’s Eve Polastri on “Killing Eve”), so good when she’s being good, and so very, very good when she’s locking horns with other moms.

An actress of that caliber needs onscreen children with natural, intuitive skills like Kim Hye-Yoon, as the eldest daughter Kang Ye-Seo, and the 12-year-old Lee Ji-Won, whose every screen time as the warm and perceptive Kang Ye-Bin, a younger sister who only plays second fiddle to the petulant and selfish Ye-Seo, indicates a future star.

Worth noting as well are the breakout turns by Kim Bo-Ra as the bright but underprivileged student Kim Hye-Na and Song Geon-Hee as the desperate, psychologically abused son Park Young-Jae.

This K-drama was thoughtfully filmed—as it should given the weight of its message and, to expand on the director Jo Hyun-Tak’s rationale that a message delivered with humor is more effective, no parent-viewer would want to watch a program that’s essentially lecturing them on how to be a good parent. After all, there’s really no one perfect way to be a mom or dad, or both.

And so Mr. Jo (the series director, not the villain Joo-Young’s good-looking assistant-henchman) worked extensively with his actors. He filmed them against a rich, purposeful mise en scene (i.e. camera circling the actor to heighten mood and impact, using mirror and other reflective devices to imply deceit and/or indecision, set design that’s meaningful and symbolic). He took the time to film people up close—so close, in fact, you could see wrinkles and the slightest twitch of the eye—and eventually observed their hand movements, too.

Mr. Jo has had a reputation for creating astonishing endings, which he generously applied in the drama, laden with melodies from the three haunting iterations of the theme song—and now iconic K-drama anthem—“We All Lie” (see related story).

You’ll know what we mean when you reach the end of Episode One, because there were barely any hints and everything simply looked glossy. To think it’s just the first of 20 “SKY Castle” endings that made this K-drama soar very high.

“SKY Castle” can be streamed or downloaded on the Viu app and website.