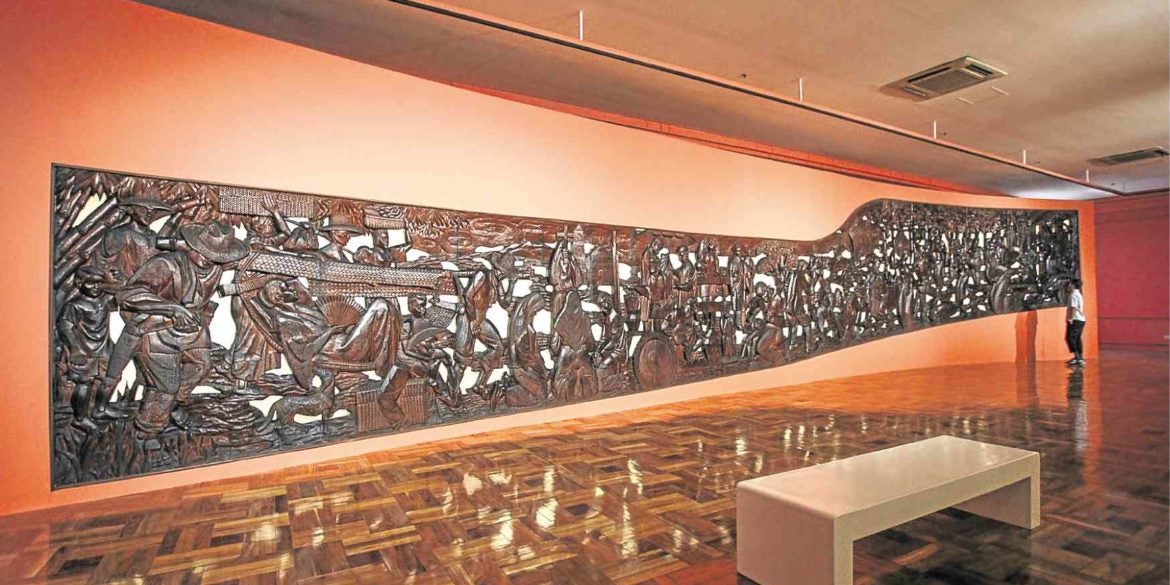 Sometimes, heritage persists despite the dual onslaught of change and human indifference.

Perhaps to balance out the building’s modernist design, inspired by the International Style then in vogue, Philam Life commissioned a set of large murals by Vicente Manansala depicting scenes of Philippine life for the main building.

For the Philam Life Theater, a key component of the building and the company’s pride, Arguelles commissioned sculptor Jose P. Alcantara to create a kind of counterpoint to Manansala’s murals—in the form of carved wood relief panels running the length of both flanks of the theater’s orchestra.

For this epic undertaking, Alcantara hired and trained several wood carvers from Paete, Laguna—where carving is a traditional skill handed down from generation to generation—to assist in realizing his vision.

The result was a landmark piece of Filipino sculpture, in both scale and conception: a panoramic reimagining of Philippine history and culture rendered in wood. For decades, generations of theatergoers marveled at the intricacy of the design and the skill it demanded from the woodworkers.

In 2012, the property was acquired by mall and condominium developers SMDC. Almost immediately, the cultural community raised the alarm. What would become of the theater, one of the few remaining havens for classical music and the performing arts?

Henry Sy, SMDC head, assured the heritage conservation community that the theater would be preserved, though perhaps not in its present form, and that people could stop wringing their hands. As for the artworks, most would find a new home in Philam Life’s new corporate headquarters in Bonifacio Global City.

In 2013, the Philam Foundation placed the Manansala murals in the care of the National Museum, and provided a P5-million grant to fund, among other things, a Philam Life gallery to showcase the Manansalas.

Until recently, the fate of the Alcantara carvings remained unknown.

In fact, Louie Alcantara, the sculptor’s youngest son, who had emigrated to the United States, traveled to the Philam Life Theater from Las Vegas with his son, so he could see his grandfather’s work, only to find the building shut. A security guard let them in for a brief glimpse of the sculptures in the darkened theater, but could not say what was to become of them.

They needn’t have worried. Plans were underway for the Alcantara carvings to rejoin their old companions, the Manansalas, at the National Museum. In fact, shortly after Louie’s visit, they were transported to the museum for much-needed restoration work.

Last March 14, one of the larger Alcantara carvings was unveiled in a special gallery at the National Museum of Fine Art.

Alcantara had not given his masterwork a title, but the museum tentatively called it “Muslims Greeting Filipino Christians” because of its subject matter.

“We want to underscore the notion that Filipino artists were primarily sculptors,” says National Museum assistant director Ana Labrador. “That can be seen throughout the art history of the country. We’ve just gone back to our roots now that the Alcantara sculptures are here.”

She noted that, like Manansala, Alcantara was a big fan of Tagalog movies, and his panoramic conception might have been influenced by the scenography of classic LVN and Sampaguita costume epics.

In any case, the exhibit should shine a spotlight on one of the key figures in the development of Philippine sculpture during its transition from traditional to modern styles.

Born in 1911, Alcantara was a contemporary and friend of both Manansala and painter Antonio Dumlao.

According to Amy Alcantara Wannamaker, the artist’s daughter-in-law, the trio would often hang out together, calling each other by unmentionable nicknames, and going to the countryside to paint.

Unable to put himself through art school, Alcantara did the next best thing and apprenticed at the Quiapo atelier of Isabelo Tampinco, the recognized maestro of Philippine sculpture in the last years of the Spanish colonial era. Later, he also worked at Gonzalo Puyat’s furniture factory.

Although he was completely self-taught, Alcantara won numerous awards for his wood sculptures from the Art Association of the Philippines in the 1950s, and was a well-known figure in the local art scene when Arguelles gave him the Philam Life commission.

If today he’s not as well-known as Abueva, Castrillo and the other sculptors that followed him, surmises Wannamaker, it might be because her father-in-law didn’t have any interest in self-promotion.

“My father-in-law kept his art to himself,” she says. “He did it because he loved doing it. He didn’t publicize it or entertain the media.”

In his later years, she recalls, he worked out of his home studio in Binangonan, Rizal. Aside from sculpture, Alcantara was also a painter. Sometime in the 1980s, he moved to the United States to live with his children. He continued to exhibit there, and did some commissions, including one for the Philippine Airlines office in San Francisco.

He went back to the Philippines after his retirement, and died in 2005.

His work, however, lives on. According to Max Ventura, Philam Foundation president, there’s much more that remains unseen, including the corresponding left-hand panel which is just as spectacular as “Muslims Greeting Filipino Christians,” as well as smaller decorative panels depicting scenes from Philippine folklore such as Malakas and Maganda and Mariang Makiling. They will eventually join the other Alcantaras at the National Museum.

Culture and heritage has always formed a significant part of Philam Life’s corporate social responsibility programs, says Ventura. During its heyday, the Philam Life Theater was not only a showcase for the performing arts, but its lobby was also an exhibition space for established and emerging Filipino artists.

In fact, the company’s art collection grew because of these exhibits: each artist donated an artwork in exchange for use of the exhibit space.

The Philam Life collection also includes several important artworks by Jose Joya, Oscar Zalameda and Ang Kiukok, which may eventually find a larger audience at the Philam Life Gallery at the National Museum.

“We may no longer have the theater, but Philam Life is still looking at art and culture because it’s part of our concept that wellness is wholeness,” says Ventura. “Our vision is to help Filipinos live life to the fullest, to be healthy, wealthy and wise. Our various health advocacies form the ‘healthy’ part; financial awareness and literacy equals ‘wealthy,’ and mental wellness equals ‘wise.’”