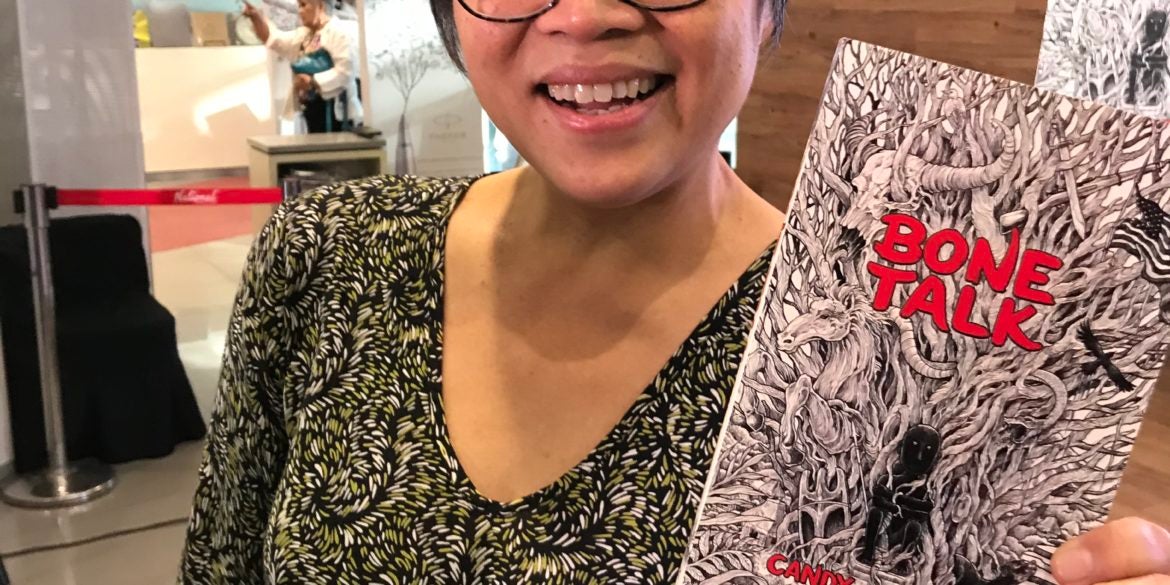 Filipino writer Candy Gourlay’s newest book, the young adult (YA) novel “Bone Talk,” has been shortlisted for the 2019 Carnegie Medal, considered the most prestigious literary award for children’s and YA books published in the United Kingdom.

“When I was a kid, I read all the books I could find that had the Carnegie Medal,” Gourley told the Inquirer. It was like magic, like an amulet. I really knew about it. So to be shortlisted, I’m speechless. I cannot breathe. It’s incredible!”

“I’m happy with the shortlist. If I win, that’s just a bonus,” she said.

Gourlay is in Manila to launch the Philippine edition of “Bone Talk” from Anvil Publishing, Inc. The book was launched March 19 in National Book Store Glorietta 1, Makati City.

“Bone Talk” was first published in the UK by David Fickling Books in 2018. It is set in 1899 and revolves around a Bontok boy named Samkad whose life is thrown into disarray when the Americans arrive.

“It’s a coming-of-age story that is also an identity story. All young people, all teenagers are looking for who they are and that that it was reflected in how we as a people are looking for an identity, where we have forgotten it because one of the first things that happened when the Americans came is they erased it,” she said.

Gourlay has two YA novels which both have Filipino themes. “Tall Story” (2010) features Filipino protagonists and is about basketball. That book was nominated for 13 prizes and won the Crystal Kite Prize for Europe and the National Children’s Book Award in the Philippines. “Shine” (2013) is about a mute girl named Rosa on a mysterious island called Mirasol where she has to deal with superstition and fear. That book also won the Crystal Kite Prize for Europe and was named one of The Independent’s 50 Best Winter Reads.

Named after the Scotland-born American philanthropist and industry magnate Andrew Carnegie, the Carnegie Medal is given by the Chartered Institute of Library and Information Professionals. Established in 1936, it is awarded to the best English-language book for children and young adults published in the UK the previous school year. Past winners of the Carnegie Medal include C.S. Lewis, Neil Gaiman, Terry Pratchett, Philip Pullman and Patrick Ness.

Maria Cristina Lopez Quimpo Gourlay was born in Davao City and graduated from the Ateneo de Manila University in 1984. She worked for the Mr & Ms Special Edition under publisher Eugenia Duran Apostol and editor Letty Jimenez-Magsanoc. She stayed on when that publication became the Inquirer Weekly as one of its first reporters; she then worked the desk at what was now the Philippine Daily Inquirer. She has lived in the UK since 1989 when she married Richard Gourlay, who had been Manila correspondent for the Financial Times of London. After working as a journalist for a time, she turned to writing fiction.

Up next, Gourlay has a biography of the Portuguese explorer Ferdinand Magellan for 8-to-10-year-olds. She has begun work on a standalone sequel to “Bone Talk” focused on the Bontok girl Luki.

Being away from the Philippines spurred her to write about Filipino topics. “It’s my own exploration, I think, because I’m so far away. I’m always asking questions in a way that I wouldn’t if I were living here,” she said.” “I consider my primary readers to be Filipinos and what I try to do is make it accessible to Western readers.”