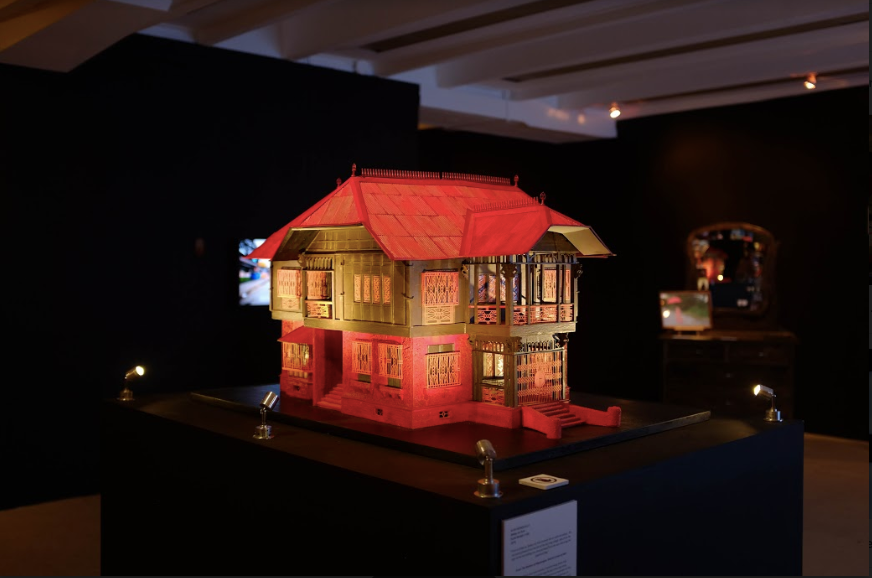 "I feel like there’s more openness to talk about this issue given the recent #MeToo Movement."

A student-curated exhibit giving light to the plight of Filipino comfort women was opened last Saturday, March 16, at the Rizal Library in Ateneo de Manila University.

The exhibit featured art works from various artists whose works were in honor and remembrance of the comfort women, as well as victims of sexual assault and abuse.

One of the highlights of the exhibit was a scale model of the “Bahay na Pula” by Holy Angel University architecture student Kloii Ronquillo.

“Bahay na Pula” or the Ilusorio House in San Ildefonso Bulacan, was a prewar structure where comfort women from Bulacan and Pampanga were brought to be abused. The controversial house was demolished in 2016.

Memorabilia from Maria Rosa Henson — the first Filipina who made public that she was a comfort woman during World War II — included clothing, letters, illustrations and photographs.

“Lola Loleng” was Tagyamon’s undergraduate thesis. Tagyamon was inspired by her grandmother who she never met and “encourages viewers to dialogue with the past through reimaginations.”

Mercado, who put six months into working on the exhibit, said that she has always been interested in World War II and how memories are passed down from generation to generation.

While she was in San Francisco as an exchange student, Mercado took a class in modern Japanese art and focused on post-war Japan and World War II. She learned that through various art forms and peace memorials, future generations who never experienced war will remember it enough and have the ethic of “never again.”

“We don’t have this kind of system in the Philippines, which is why I think we are so forgetful. So for my project, I wanted to convey a similar kind of memory transmission,” Mercado said.

She immediately thought about the comfort women of the Philippines.

“We are often taught about generals and presidents during the wartime, but rarely or vaguely about the women and children who were left behind,” she added.

The exhibit opening was attended by some of the surviving members of the Malaya Lolas, an organization for surviving comfort women based in Pampanga.

Lola Lita also shared that when they first organized Malaya Lolas, there were 96 of them, now there are only 28 members alive.

She then sang an original piece detailing their experiences at the hands of the Japanese soldiers during World War II.

The Malaya Lolas are based in Mapaniqui, Candaba. Some of them were married and had families of their own, while others remained single.

Lola Lita noted that it was important to let more people know about their stories and ongoing struggles.

“In The Spaces We Mend” runs until April at the second floor of the Rizal Library Special Collections Building at the Ateneo de Manila University. JB

The Red House of Horror