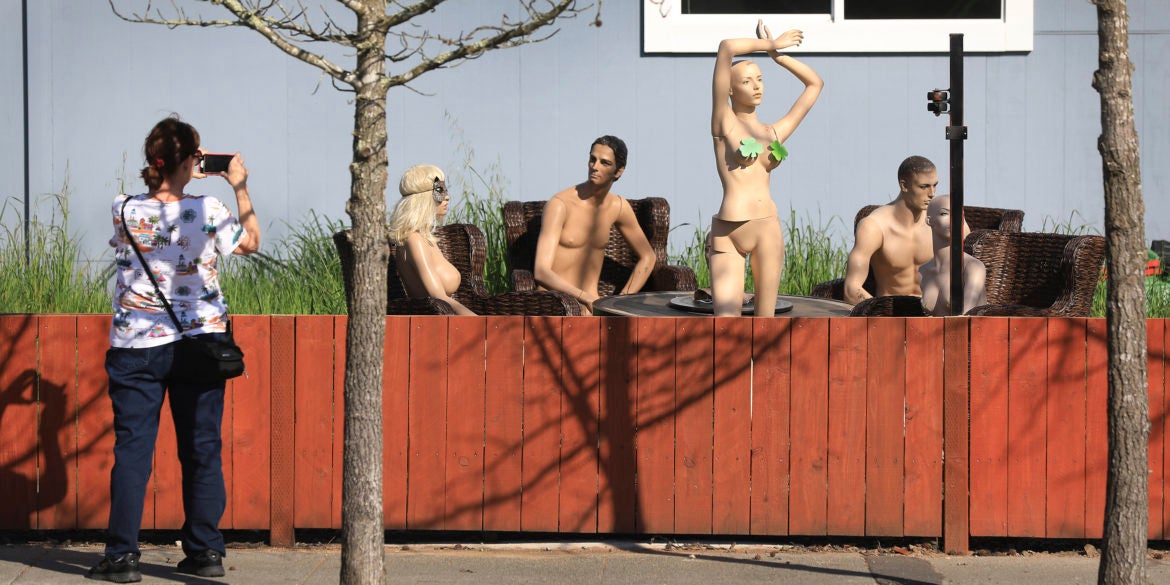 In this photo taken Monday, March 18, 2019, a woman stops to photograph a display of mannequins in Santa Rosa, Calif. Homeowner Jason Winduce set up the display, after a neighbor in the area complained to the city about his six-foot-tall fence. Winduce had to cut the fence to three feet. (Kent Porter/The Press Democrat via AP)

Forced to shorten his fences, man gets revenge by setting up nude mannequin garden party

For being forced to shorten his fences, a man in Santa Rosa, California found a way to get even through a hilarious display in his lawn — a nude mannequin garden party.

Jason Windus originally had 6-foot fence to keep his dogs Caine and Domino in his backyard, local media The Press Democrat first reported on Tuesday, March 19. Windus said he originally paid $9,000 (almost P475,500) to have the fence set up.

However, he received a notice from a city code enforcer, telling him that his fences were above the 3-feet maximum height specification for fences. Windus also said in the report that his local City Hall was only responding to a complaint from an unknown neighbor.

“It is very serious. They made me freak out,” he said in another report by KGO. “They were going to fine me every day it wasn’t taken down.”

So he took matters into his own hands, and set up a nude mannequin garden party as a way of protest against the rule.

Windus, who started off in a trucking business by hauling other people’s unwanted stuff to the dump, said he got the mannequins from a clothing store.

“I couldn’t bring myself to throw them away,” he explained in the report. “I was going to use them for target practice.”

Part of his protest was a sign addressed to his still-anonymous neighbor, which read: “Reserved seat to the nosey neighbor that complained about my fence to the city.” Katrina Hallare/JB