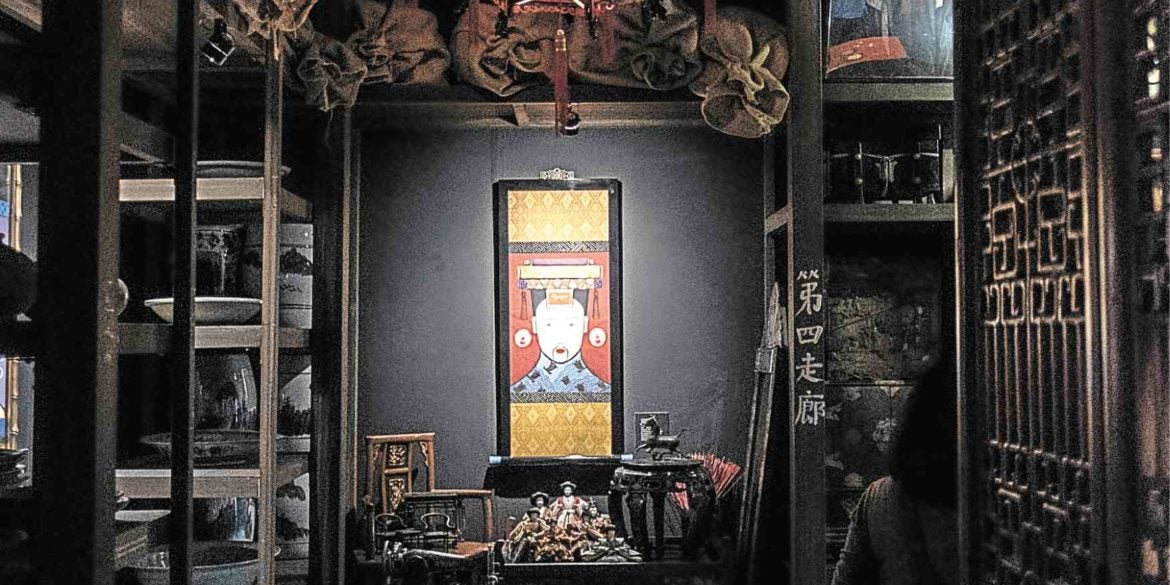 “Devaraja” set amid uncanny authenticity. Scenographer Gino Gonzales creates a spectacular period warehouse setting that combines what would have been a merchant’s stock in trade—sacks, various vessels—with period pieces from Ayala Museum. —PHOTOS BY JC INOCIAN

Why Mark Higgins’ ‘mind museum’ is an experience

Strangely familiar, as if dimly remembered from some long-forgotten dream. Or a past life.

That is the feeling one gets as one enters “Gold in Our Veins,” Mark Lewis Lim Higgins’ ongoing exhibit of paintings and artifacts at Ayala Museum.

Not every art exhibit is an experience, but this one is. As we used to say back in the day, it’s a trip.

Imagined as the “warehouse of a wealthy Chinese merchant somewhere in Southeast Asia in the early decades of the 1900s,” the setting is “a metaphor for an undiscovered place that contains the untold wealth of our past.”

According to Gonzales, the bodega is a “mind museum” manifesting the artist’s subconscious.

It’s as if, following the scent of ylang-ylang and sandalwood incense carried on a breeze, you had stumbled upon an old curiosity shop in an obscure corner of some nameless Asian city, and found rare treasures within.

Enhancing the dreamlike ambience is a playlist curated by the artist that sequences a chiming gamelan orchestra, the Chinese erhu, Tibetan trumpets, and what sounds like Mongolian throat singing, creating an immersive soundscape as one wanders through the labyrinth-like space.

The paintings are matched with precious artifacts from the Ayala Museum’s collections,
including Philippine archaeological gold, indigenous textiles, tradeware ceramics from China and Southeast Asia. These serve to underscore the solid historical and mythological underpinnings of Higgins’ art.

The suspension of disbelief is heightened by interspersing the priceless artifacts with what would have been a merchant’s stock-in-trade during that era: spices and aromatics, silks and brocades, inkstones and apothecary jars, joss sticks and vermilion.

“Juxtaposed with pre-Spanish gold jewelry and ornaments, the paintings of Mark Higgins challenge the viewer on two levels,” writes historian Ambeth Ocampo in his catalog essay.

“First, the purely artistic, a representation of reality in color, form and perspective; and second, the historical, revealed through images and allusions that can only be understood fully by four people in the universe—Higgins, Umberto Eco, Robert Langdon, and Benjamin Franklin Gates.”

Of the four, he adds, only Higgins remains, Eco having died and the other two being fictional characters.

“From the books I have read to the locations I have visited. For this series I took elements of the precolonial histories and cultures of our region and its environs, and rendered them into my own vision of contemporary Southeast Asian art.”

Says Ma. Elizabeth Gustilo, senior director for arts and culture of the Ayala Museum: “What attracted us to Mark’s work is that it dealt with ancient histories and cultures that happen to be reflected in our collection.”

“This is a new way of presenting the collection and communicating the value of objects,” she adds. “We really do push the boundary a little bit, so we get the community to engage more with history. It’s multilayered, and people connect to it on different levels. It’s a highly creative way of approaching exhibition design, and the response has been very positive.”

Higgins studied art in Canada and fashion design in New York. He has lived and worked in Rome and San Francisco, and exhibited in New York and Hong Kong before returning to the Philippines.

He is best known for creating art objects which combine painting with gold leaf, semi-precious stones, rich textiles and elaborately carved frames. In previous exhibits such as “Diaspora” and “Tribes,” he began the series of portraits from reimagined oriental cultures that he continues with “Gold in Our Veins.”

The exhibit marks Higgins’ return to painting after more than a decade. With his sister Sandy, he has also been helping run Slim’s Fashion and Art School, which his mother established.

“Having been born to an Anglo-Irish father and a Chinese-Filipino mother, it was always effortless for me to tread between the East and West—to imagine the most unlikely possibilities or juxtapositions in just about anything. My maternal grandfather Lim Ka Tiam was born in Amoy, in Fujian, China. He was a Sunday painter and did in fact paint with oil on canvas, but alternatively created Chinese calligraphy on paper.

“My mother, Salvacion Lim, began as a painter, then evolved into a fashion designer—fearlessly experimenting with sculptural masterpieces of shape, line and color—choosing fabric as her means of expression.

“This series of paintings is ultimately a celebration of my own hybrid lineage. Indeed, it is homage to all of our ancestries—particularly to ones so deeply rooted in our DNA and of which many Filipinos may have never even been aware. Far beyond the limits and borders of what become countries or nations, we are all maps of our ancestors. This is my tribute to the gold that flows in all of our veins.”