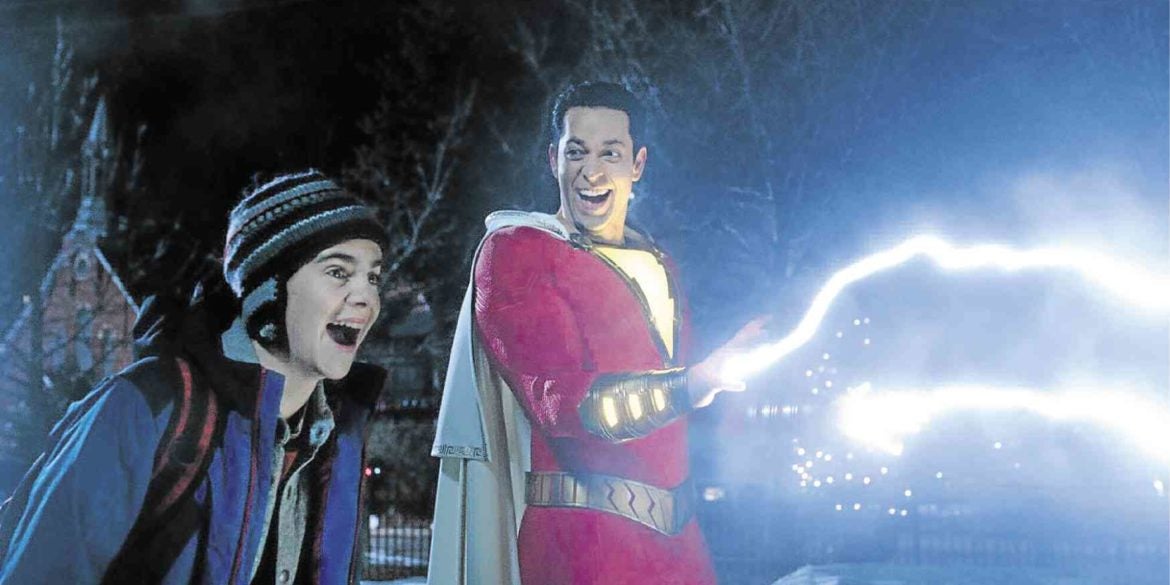 At one point, the character now known as Shazam was the most popular comic book superhero of them all, outselling Superman by tall leaps and bounds. He was then known as the first Captain Marvel—“Shazam!” was the magic word he used to trigger a transformation. Today, Shazam and Superman both belong to DC Comics and thus share a common comic book Multiverse.

With the release of Warner Bros.’ “SHAZAM!” the two now also share a cinematic universe—the DC Extended Universe or DCEU—thus putting Shazam in the same reality as the heroes  of 2013’s “Man of Steel,” 2017’s “Wonder Woman” and 2018’s “Aquaman.”

Created by Bill Parker and C.C. Beck (ultimately empowered by writer Otto Binder), the original Captain Marvel first appeared in “Whiz Comics” #1 from Fawcett Publications in 1939, eventually eclipsing National Publications’ (now DC Comics) Superman by 1944, selling millions of copies. He was also the first superhero to get a movie, with 1941’s “Adventures of Captain Marvel” coming out before 1948’s “Superman.” Unlike Superman, he was magically powered—Shazam stands for the wisdom of Solomon, the strength of Hercules, the stamina of Atlas, the power of Zeus, the courage of Achilles and the speed of Mercury. After years of litigation, DC eventually bought the Captain Marvel character, but by that time, Marvel Comics already owned the trademark with a Captain Marvel of their own, and DC changed the character’s name to Shazam.

While he seems to be just another Superman analog, Shazam is unique because he literally transformed from a teenaged kid named Billy Batson into an adult superhero, something that appealed to many younger readers. It also is important that as a magical character, Shazam has his roots in mythology. Plus, the word “Shazam!” has been planted in the popular consciousness for decades, and now there is a modern movie to go with it.

The “SHAZAM!” film finds its particular context in the new ongoing “SHAZAM!” comic book series from writer Geoff Johns, thoroughly modernizing the character. It is actually quite impressive how closely it hews to the current comic book.

Billy (Asher Angel from Disney’s “Andi Mack” TV show) is a 14-year-old kid who keeps running away from foster homes as he searches for his mother. He finds his way to a Philadelphia foster home where he meets the superhero-obsessed Freddy Freeman (Jack Dylan Grazer from the 2017 “It” movie). On the run from bullies, Billy suddenly finds himself in the presence of an ancient wizard (Djimon Hounsou) who chooses Billy as his champion. When Billy says the magic word, he transforms into the superhero Shazam (Zachary Levi, TV’s “Chuck”).

Enlisting Freddy’s help, Shazam tries to learn about his powers and struggles to be a real hero. Unfortunately, he is the object of pursuit of Dr. Sivana (Mark Strong from 2014’s “Kingsman: The Secret Service”). Empowered and wielding the malevolence of the Seven Deadly Sins, Sivana seeks to add Shazam’s powers to his own, leading to a conflict between metahumans that rock the city. This Sivana is more than the evil mad scientist of the comic, as his back story has the magical elements of Shazam’s other arch enemy, Black Adam.

“SHAZAM!” is directed with brio and sincerity by David Sandberg (“Anabelle: Creation”). He crafts an origin story for the scarlet-and-gold hero that presents the twist—the adult superhero is really a kid—as an appealing story element instead of an audience obstacle. You will get it.

This is made very effective by Levi’s fantastic performance. Ever since his “Chuck” days, Levi has shown comedic chops and those are on full display here. Furthermore, Levi makes Shazam believable as a man who’s a kid inside. Grazer is also very good as Freddy. Strong has always been good chewing up scenery as a bad guy. One can only imagine how Dwayne “The Rock” Johnson will be like in his forthcoming “Black Adam” movie.

“SHAZAM!” wears its influence on its costumed sleeve. The DC references, both subtle and obvious, are delightful. The film has a very 1980s “Goonies” feel, and its nods to the 1988 Tom Hanks film “Big” (also about a kid who magically becomes an adult) are welcome. It also pays tribute in many ways to the 1978 Christopher Reeve “Superman” film.

Seen through modern eyes, “SHAZAM!” is all about dualities and contrasts: boy and man, hero and villain, magic and reality, family and outsiders. All these are filtered through the prism of superhero high jinks, but “SHAZAM!” doesn’t bother itself with trying to explain issues. It just flies with fervor.

The DCEU admittedly began on a much bleaker note, exemplified by “Man of Steel” and 2016’s “Batman v Superman: Dawn of Justice.” But beginning with “Wonder Woman,” the DCEU began venturing into the brighter, more optimistic territory that good comic books were known for. “Aquaman” was as funny as it was surprising.

“SHAZAM!” is DC’s most fun movie yet, genuinely funnier than “Aquaman.” It’s a family-friendly film that can serve as the right kind of gateway into comic book movies for younger viewers. There’s a fantastic twist in the last act that will have audiences breaking out into applause. “SHAZAM!” is also that rare film that gets better the deeper you get into it. Just try to leave the theater without a smile on your face.

“SHAZAM!” is the second-best DCEU film, just behind the barrier-breaking, almost perfect “Wonder Woman.” Most of all, “SHAZAM!” is a film that faithfully honors its source material with a hero who learns to be a hero for the right reasons through a colorful, charismatic scenario and shows that DC now knows the right direction to take its cinematic properties, just as if it has found its own magic word to transform itself into something powerful.