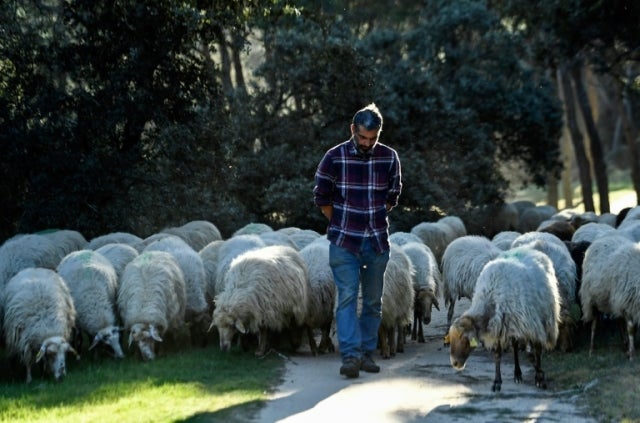 The goal is to reduce the risk of wildfires by clearing vegetation in an environmentally-friendly way. Image: OSCAR DEL POZO - AFP

It’s a rustic scene: sheep graze placidly on grass as a shepherd keeps watch. But this is Madrid’s largest public park, not the tranquil countryside.

Madrid city hall has since February employed 500 sheep to munch undergrowth at the Casa de Campo, a former royal hunting ground with pines and scrubland stretching over 1,722 hectares (4,255 acres) — an area about five times the size of New York’s Central Park.

The goal is to reduce the risk of wildfires by clearing vegetation in an environmentally-friendly way while also helping to educate the Spanish capital’s roughly 3.2 million residents about rural life.

“It’s a very efficient method to prevent wildfires in a much more natural way,” said Beatriz Garcia San Gabino, 46, who is in charge of managing Madrid’s green spaces.

“Instead of clearing scrub with machines, you use sheep which don’t consume fuel and don’t erode or contaminate the soil.”

Manure from the sheep also helps to fertilize the soil and spread seeds across the park, she added.

Most of the sheep belong to a breed indigenous to Spain which is vulnerable to extinction, the Rubia del Molar which is mainly white with pale brown faces and legs.

People are “delighted” to come across the sheep in the park, said Alvaro Martin, 45, one of two shepherds who look after the flock full time.

“Everyone approaches then, a lot of people understand the work that the sheep do in the park, to clean and reap the grass. Children approach them immediately and ask ‘can I touch them?’,” he said as he guarded over the sheep with the aid of a dog as they grazed on the grass while cyclists raced by on a nearby trail.

The park’s attractions include an artificial lake, a zoo, an amusement park with over 50 rides, a cable car line and a public swimming pool.

When the sun sets the sheep sleep inside a large white tent set up on top of a hill which offers sweeping views of Madrid’s Royal Palace.

As temperatures rise in mid-June, the sheep will return to their home at a ranch run by the Los Apisquillos farm cooperative in the Puebla de la Sierra, a mountain village located about 110 kilometers (68 miles) north of Madrid.

The flock will move back to the park in mid-October to spend winter in the city where it is warmer and there is more vegetation.

Skunk gets head stuck in beer can