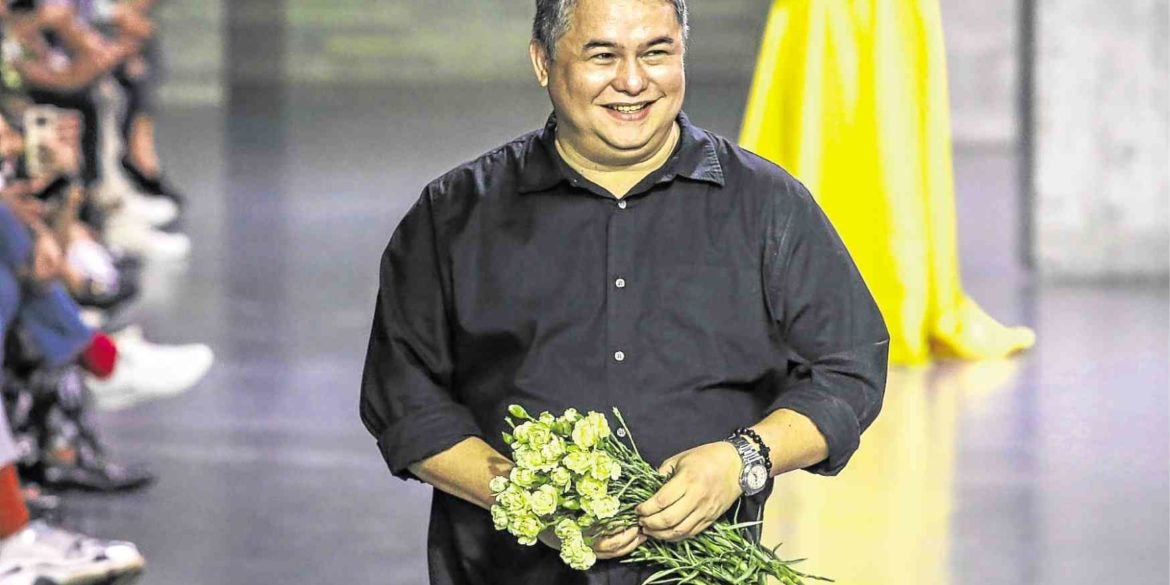 JC Buendia: “I want to usemywork to inspire hope and courage.” —PHOTOS BY JAM STA. ROSA

JC Buendia is proud of yellow

In a parade of sedate black and white pops up this summer color—a line that’s glam, yet active

It was subtle, but a definitive affirmation of his political leanings.

JC Buendia has made no secret of his friendship with the Aquino clan—after all, he designed shirts and barong Tagalog for President Noynoy Aquino before and when he was in office.

So, like a wink, he gave a nod to that affinity in his capsule collection for Bench Fashion Week Spring Summer 2019 last Sunday, March 31, at the Bench building in Bonifacio Global City.

(To be objective, Buendia has ties also to other top political clans, and has made the presidential wardrobe of former President Gloria Macapagal-Arroyo.)

At Bench Fashion Week, he made two buttercup-yellow dresses—the only bright spots, so to speak, in the otherwise sedate, black-and-white palette of his 15-piece collection.

Perhaps it’s his dig at the current political climate? He laughs heartily at the suggestion.

In the pre-event, Bench posted a background teaser of Buendia’s collection that said it referenced 18th-century Scotland, out of the TV period drama “Outlander.” The woman in his mind is Claire, the female lead character of the show. (Buendia is an unabashed TV buff and Netflix addict.)

The neutral palette, more than anything, is a tried-and-tested commercial formula, Buendia says. The Victorian reference is evident in the flounced sleeves of the organdy blouses and long, modest skirts, but the feel of the collection is very now and modern.

There was a short tailored jacket paired with a sheer black tulle skirt, a mini dress tied with bows on the shoulders, another mini dress with a flounced hem.

He also borrows elements from menswear, with tailored vests and pants, and a yellow collar necklace to butch up an Audrey Hepburn-ish strapless dress with a full skirt.

To underscore the now-ness, the models wore trainers—even with the eveningwear, which sported pockets, because, Buendia writes on Instagram, “Pockets have become a must for evening gowns.”

Buendia tells Lifestyle: “I didn’t want to make it so couture and be out of place, because I was showing alongside Bench Swim and Bench Active.”

Veteran model Izza Gonzales Agana opened the show with a yellow dress in gazar, the first of only two—a forgiving silhouette with a high neckline. It set off the senyora model’s morena complexion. The second yellow look was a hand-beaded gazar top with a layered tulle skirt.

A look or two bore patchwork “87”—the year Bench was founded, and also the same year Buendia started in fashion. “I looked back and remembered that yellow was also very much a part of that time in our country’s history,” he says, referring to post-Edsa Revolution. “People were hopeful and optimistic.”

He owns up to the political statement of the two yellow dresses. He said that in the past three years, many of his clients were averse to wearing yellow because they were afraid to be identified with one political camp.

“But after all that time, yellow suddenly seemed so fresh,” says the soft-spoken designer. “It’s a beautiful color—the color of sunshine and hope. And yellow doesn’t belong only to the Aquinos.”

While he’s not shy about his politics and friendships, Buendia has been circumspect on social media.

“Before I’m a designer, I’m first a Filipino,” he says. “I want to use my work to inspire hope and courage. I’m quiet but I’m passionate about making our country a better place.” He quotes another Netflix series, “Designated Survivor”: “Don’t sling mud, sling hope.”

He adds: “There’s no perfect administration. I just have the advantage of knowing the [Aquino] family intimately. They’re very real and down to earth. I make clothes for many political families and I can assure you that the Aquinos are very authentic.”

So, go ahead and call him “dilawan.” Buendia is yellow and proud.