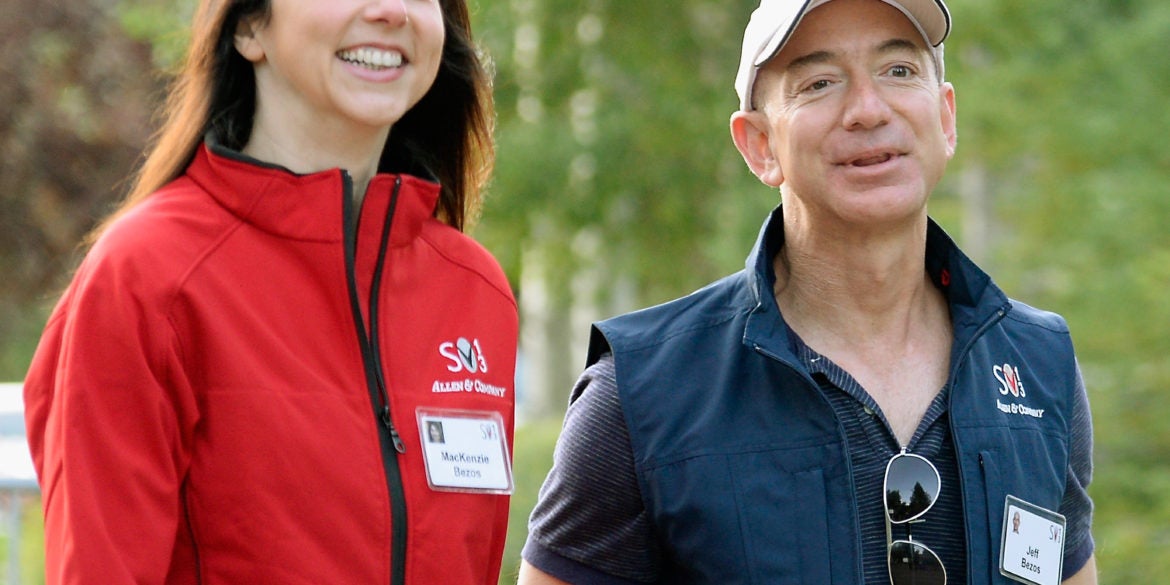 (FILES) In this file photo taken on July 10, 2013, Jeff Bezos, founder and CEO Amazon.com, and his wife Mackenzie Bezos arrive for morning session of the Allen & Co. annual conference at the Sun Valley Resort in Sun Valley, Idaho. - MacKenzie Bezos announced on April 4, 2019, the couple had finalized their divorce, and that she would surrender 75 percent of the couple's shares in the tech giant. Bezos also said she would surrender all of her stake in The Washington Post and the space exploration firm Blue Origin to her ex-husband, as well as voting control of her remaining Amazon shares. (Photo by KEVORK DJANSEZIAN / GETTY IMAGES NORTH AMERICA / AFP)

Amazon founder Jeff Bezos and his ex-wife, MacKenzie, finalized the biggest divorce settlement in history on Thursday, leaving him with 75 percent of their stock in the tech giant and giving her nearly $36 billion in shares.

MacKenzie Bezos said she would give all of her stake in The Washington Post and the space exploration firm Blue Origin to her ex-husband — the world’s richest man — as well as voting control of her remaining Amazon stock.

Jeff Bezos, 55, and MacKenzie, 48, a novelist, married in 1993 and have four children. Jeff Bezos founded Amazon in their Seattle garage in 1994 and turned it into a colossus that dominates online retail.

In a filing with the US Securities and Exchange Commission, Amazon, which has a market capitalization of some $890 billion, said MacKenzie Bezos will control four percent of the company’s outstanding common stock.

At Amazon’s current share price that would be worth some $35.6 billion.

Jeff Bezos, who now owns 12 percent of Amazon, remains the world’s richest man and the largest shareholder in the company with an estimated fortune of $110 billion, Forbes said, ahead of Microsoft co-founder Bill Gates and Berkshire Hathaway chairman Warren Buffett.

Jeff and MacKenzie Bezos announced their separation in January and posted Twitter messages on Thursday revealing the divorce settlement.

“Grateful to have finished the process of dissolving my marriage with Jeff with support from each other and everyone who reached out to us in kindness,” MacKenzie Bezos wrote.

“Happy to be giving him all of my interests in the Washington Post and Blue Origin, and 75% of our Amazon stock plus voting control of my shares to support his continued contributions with the teams of these incredible companies,” MacKenzie Bezos said.

“Excited about my own plans. Grateful for the past as I look forward to what comes next,” she said.

Jeff Bezos, in a Twitter message of his own, said his now ex-wife has been “an extraordinary partner, ally, and mother.”

“She is resourceful and brilliant and loving, and as our futures unroll, I know I’ll always be learning from her,” he said.

“I’m grateful for her support and for her kindness in this process and am very much looking forward to our new relationship as friends and co-parents,” Bezos added.

Bezos has largely kept his personal life private during his years steering Amazon.

But it was thrust into the spotlight with the announcement in January that he and his wife were divorcing after 25 years of marriage and the revelation by the National Enquirer that he had been having an affair with a former news anchor, Lauren Sanchez.

When the National Enquirer, controlled by President Donald Trump’s ally David Pecker, threatened to release lurid, intimate pictures of Bezos and Sanchez, Bezos fought back by releasing the details of his exchanges publicly.

“Rather than capitulate to extortion and blackmail, I’ve decided to publish exactly what they sent me, despite the personal cost and embarrassment they threaten,” Bezos wrote in a blog post.

A lawyer for the National Enquirer denied that the supermarket tabloid had tried to extort and blackmail the Amazon founder.

Trump has been a frequent critic of the Post, which Bezos purchased in 2013, claiming that the newspaper is biased against him and calling it the “Amazon Washington Post.”

Amazon shares were down 0.28 percent at $1,815.69 in New York on Thursday shortly before the close of trading.