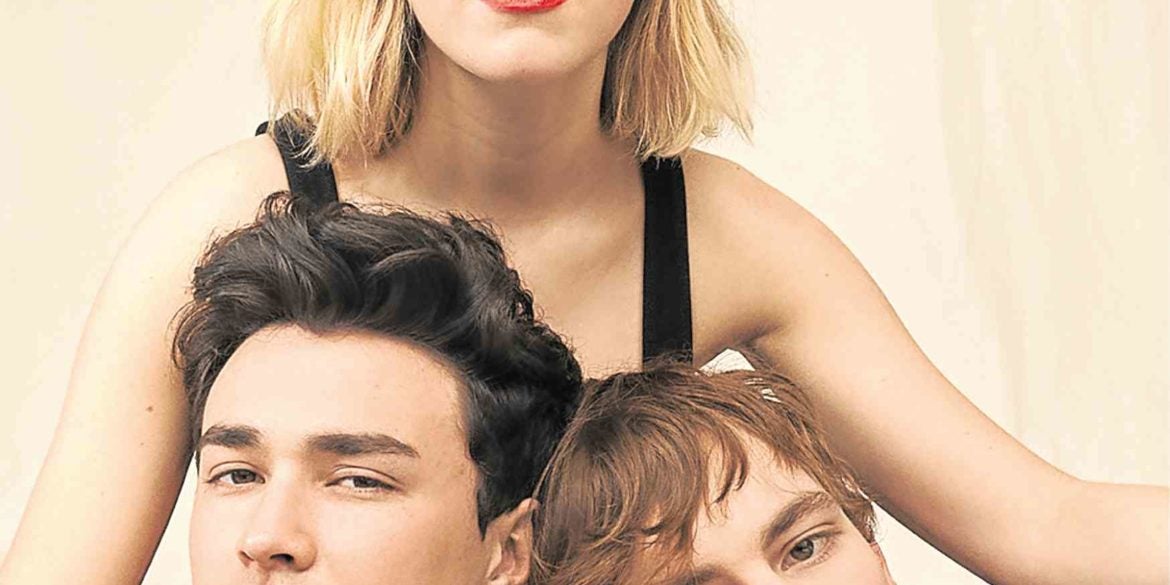 The bewitching trio of Sabrina, Harvey and Nick

Kiernan Shipka, Ross Lynch and Gavin Leatherwood on their unholy love triangle and their return in ‘Chilling Adventures of Sabrina: Part 2’

The witch is back.

“Chilling Adventures of Sabrina: Part 2” (CAOS) started streaming on Netflix on April 5, continuing the story of our favorite teenage witch. In this second installment, Sabrina learns more about her heritage, explores her darker side and yes, gets caught in a love triangle with sweet Harvey and sexy Nicholas. Would she go for the mortal or the warlock? We’ll find out.

What do you love the most about playing Sabrina?

I love her bravery. And I love her lack of inhibition.

Were you a fan of the comic books?

I was actually a Betty & Veronica fan growing up!

If you don’t see our feet in a shot, we’re definitely wearing Uggs.

What can fans expect from the show in season 2?

If you had Sabrina’s powers, what’s the first spell you would cast?

I would astral project to see my friends.

Would you do a Riverdale crossover? If you can choose, which Riverdale character would Sabrina date and why?

I absolutely would. I think Sabrina might kick it with Archie. I don’t know why, but they have a lot of the same characteristics…

What do you binge-watch on Netflix?

The last thing I binge- watched was probably “Nailed It!”

What do you love about playing Harvey?

What can fans expect from the show in season 2?

I haven’t seen it yet, but from what we filmed I can tell you it’s gonna be badder and sexier, for sure. Now Sabrina is a full witch. It gets crazy.

What’s it like working with Gavin? Does your bromance continue off the set, too?

Very much so actually. We hang out all the time. The bromance is real. He’s a great friend. I hope to know him for a long time.

What can you tell us about the Sabrina-Nick-Harvey love triangle?

It’s blossoming. You’ll get some great love triangle and love square (with Jaz Sinclair) in part 2!

What do you binge-watch on Netflix?

I’ve been watching “Blue Planet II.” It’s unbelievable. Definitely recommend it! It will blow your mind.

What attracted you to this project? What do you love about the show?

When I was growing up I was a huge “Star Wars” fan and always wanted to be a Jedi… Being a warlock is pretty damn close and also pretty bad ass. I love that the show has a great combination of lightheartedness and darker moments.

What’s it like playing a warlock? In which ways are you similar to Nicholas?

Incredibly fun. In middle school I was teased a lot so I developed a different persona as a defense mechanism that is similar to Nick. I tried to appear to be a bad boy in order to ward off bullies.

Were you a fan of the comic books before getting cast in the show?

To be honest, I wasn’t really familiar with them. Though growing up I was a big fan of comic books and graphic novels. When I finally got to take a peek of the comics I noticed how dark they were… it surprised me, in a good way.

Wonderful. I feel like we all gel really well. We’re constantly jamming on the guitar or talking about deep life questions or just being silly and laughing. It’s a really lovely work environment.

If you had magical powers in real life, what’s the first you would do?

Teleport to multiple countries that I want to visit. Ireland being the first stop.

What can fans look forward to in season 2? Tell us more about the love triangle.

As far as Nick’s storyline, you get a good peek into his backstory and learn about where he came from and how he grew up. The tension of the love triangle definitely grows and we see Sabrina conflicted between something new and something familiar.

I can watch “The Office” on repeat. Also, big fan of “Sex Education,” “Big Mouth,” “Stranger Things”… Netflix is chock-full of goodies.