My Antipolo escape: A noon of ‘Kinarmang Baboy’ at Oscar’s | Lifestyle.INQ ❮ ❯ 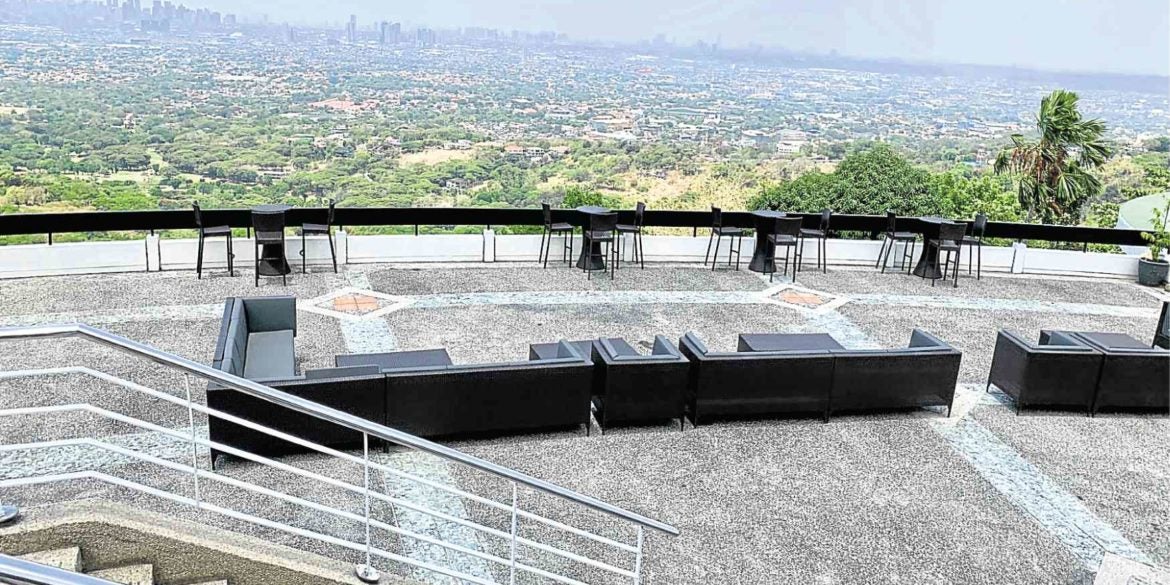 My Antipolo escape: A noon of ‘Kinarmang Baboy’ at Oscar’s

There’s a destination just a stone’s throw away from Metro Manila that’s so low-key it’s almost a secret.

The Eugenio Lopez Center sits on a peak in Antipolo that offers what must be a most picturesque 360-degree view of Metro Manila, from Rizal all the way to Makati and beyond it, the blue horizon on a smog-free day. People who’ve been there, chances are, remember it for their best shot of the sunset.

These days, however, the Eugenio Lopez Center is getting known for something other than the romantic setting. Diners go there now for Oscar’s restaurant which, since the Center was opened to the public a few years back, has been getting known for its classic specialties such as “Kinarmang Baboy,” Crispy Tadyang.

On Sundays, the Center has become a go-to place for the brunch buffet, particularly among attendees of the Sunday Mass held in the Center chapel. The brunch clientele has grown from a trickle to hundreds.

“It’s a pleasant surprise to see on a Sunday, cars parked from just beyond the gate, all the way to the main building,” says Oscar “Cary” Lopez Jr., president of First Philippine Realty Corp., which owns the Eugenio Lopez Center.

Sunday diners come for the brunch buffet, served 10 a.m.-2 p.m., or for the a la carte specialties at Oscar’s.

Last Saturday, while waiting for our main courses for lunch, we had chicken liver paté dip—a specialty that his family and friends have associated with Cary. He began making it as a young adult, after he got hold of the recipe of the friend of his mother, Connie. He’d tweak it now and then, and before he knew it, it was already in good demand; it has become his holiday gift. His paté is smooth and seemingly light, not salty or meaty-tasting at all.

Cooking has always been Cary’s passion. He is the eldest son of Oscar Lopez, chair emeritus of First Philippine Holdings, the clan’s patriarch and after whom the restaurant is named. Cary has always loved to experiment with dishes at home. He would try any dish, from paella, pasta to seafood, meat—he’s not cuisine-centric. Not partial to any region, he tries to whip up any dish—“depending on my mood.”

Forays into the kitchen

When I asked what Cary’s specialties are, Jay Lopez—his younger brother and now president of the Lopez aviation firm INAEC, who joined us for lunch—couldn’t pin down a few. He could only give us a look of amazement—simply because a lifetime’s forays into the kitchen have been yielding dishes the family could lap up at family dinners every week.

Cary also bakes. Is it in the genes? It must be the family history of shared love of good food. Cary remembers travels with his parents, and farther back, travels with his grandparents, the late Eugenio Lopez Sr., the Filipino industrialist after whom the Center is named, and his wife, the former Nitang Moreno.

At the threshold of college, Cary was asked by his father what he wanted to study, and he replied: “I want to be a chef.” This was in the ’70s, when going to college to be a chef was unheard of, except among restaurateur-families. Cary enrolled in business instead.

Now in his midlife, Cary’s original passion is making itself felt—in business, and with good results.

Over lunch, we sampled the dishes (fear of our annual medical tests and prudence took over, or we could have wiped our plate clean), and we recommend you try these:

Soup: Molo with Aligue (pork dumpling with bits of cooked chicken in aligue-flavored broth), Sinigang na Bangus Belly sa Bayabas (with guava and water spinach, I could have had this as main course with rice)

Appetizer: Sisig Samosa (our sinful sisig with the Indian fare) which we relished like a main course because we loved that it was both crunchy and meaty. In short, perfect for self-indulgence. There was another appetizer on the menu but we skipped it—Sisig with Salted Egg Spring Rolls.

That pork belly dish is so tender that one could be unmindful of the sinful bites. “Originally it was called Adobo Confit, but nobody ordered it,” Cary recalls. “So in one brainstorming, being told that the pork was cooked in its own fat for hours, the consultant suggested we call the adobo-inspired dish Kinarmang Baboy. After that, the number of orders just shot up. The diners love it.” And we also did.

We had a few—a few—slices of Binagoongang Lechon Kawali with special bagoong sauce, its fat unhidden, and Bangus Belly Kabayaki (bangus belly that is sweet soy sauce-based and glazed). And for token vegetables, we had the pinakbet (with chicharon liempo on top, I must admit).

Other main courses on the menu are Lamb Sirloin Kaldereta (lamb meat stewed in tomato sauce, liver spread and cheese), Pesto Salmon with French beans and cherry tomatoes, and Rib Eye Steak and Fillet Mignon Steak. I would have liked to taste the Osso Buco Kare-kare (served with bagoong alamang) or the Beef Mechado with Sundried Tomatoes and Potato Marbles.

The Center also gets a good dining crowd on weekdays, for breakfast, lunch, dinner and merienda. Some diners stay on to chill and enjoy the view.

The Center, which sits on a 10-ha estate, brings an assortment of memories to the Lopez clan and to the Lopez Group employees. The construction of the family property began in the ’60s and on to the ’70s, but was stopped when the patriarch went on exile in the United States upon the declaration of martial law. The younger family members would remember it as an idle structure all those years.

It has become a favorite venue for corporate meetings and conferences, as well as weddings. It has 38 rooms and suites, and has become a good choice for team building because it has hike and bike trails, wall climbing, swimming pool—a nature’s haven.

It has accommodated as many as 700 people for weddings and other banquets. Its Oscar’s can seat 40 in the main dining room, 40 more in the extension.

Given its romantic sunset and the rooms, and the chapel, the Center is really perfect for weddings.

Its clientele grew by word of mouth, since the establishment had no active promotion. “Aside from drawing in people from Makati or the rest of Metro Manila, we thought, why not the people in the vicinity or from Rizal,” Cary says. “And since we opened it to the public, we started to get a daily walk-in crowd of diners.”

The Lopez Center, particularly Oscar’s, is starting to link up with the artist and artisan communities around the area, such as the pottery artist Lanelle Abueva Fernando of Crescent Moon Café, whose small jars Oscar’s uses for the take-away chicken liver paté.

Surprisingly, the drive to the Lopez Center can be fast and smooth even on weekdays. “Sometimes it takes me faster to get here from Wack Wack than to go around the traffic-gridlocked Ortigas,” says Cary.

The Center brings us almost a lifetime of memories, from when we were with Benpres Publishing/ABS-CBN Publishing, of annual planning, of goals and dreams, and staff bonding. To that trove, I now add the Kinarmang Baboy.