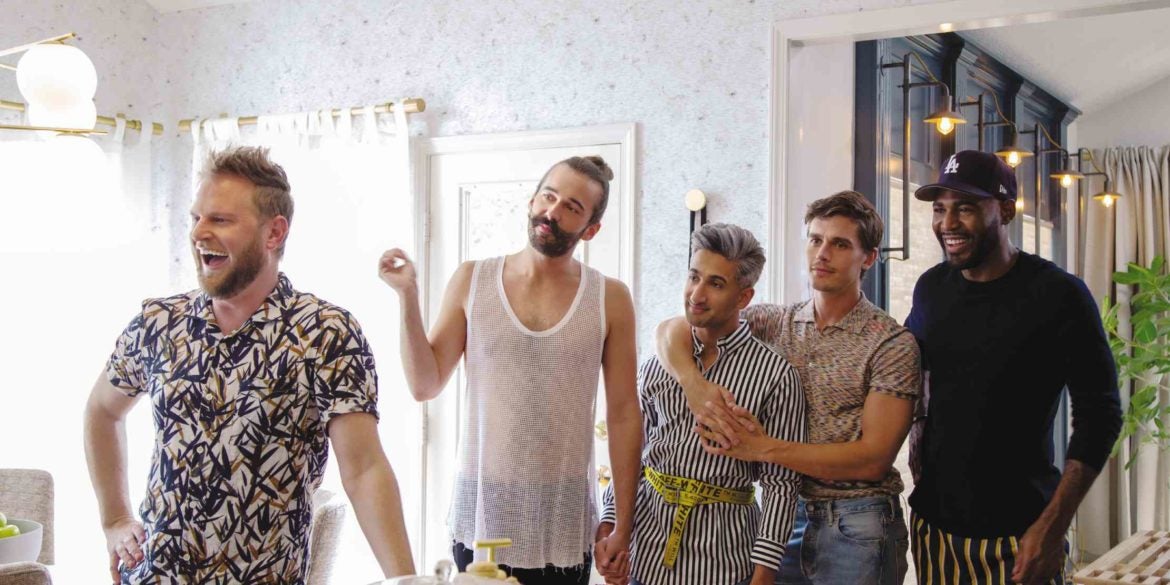 Fun time with the Fab Five

You don’t do interviews with the Fab Five of “Queer Eye.”  You have conversations with them like you do with long-time friends.

Three out of the Netflix show’s Fab Five chatted with Super over the phone recently.  Karamo Brown and Bobby Berk were not able to join but Antoni Porowski, Jonathan Van Ness and Tan France made up for it with their wit.  The Fab Three were generous with their self-care tips as well as their humor. Their personality came through even through the phone line.

“I think that’s a big difference between seasons one and two to season three is that we all know each other so well.   We’ve been shooting for over two years now,” said fashion expert Tan.

Food and wine expert Antoni continued to talk about their dynamics.

“What shows on season three is a lot of our funny little quirks and our chemistry.  It’s not necessarily learning from each other but being comfortable around each other. I think that there’s more of comfort there to be more of ourselves,” said Antoni.

The Fab Five are not just hosts.  In the show, they said that they co-write the episodes.  Their participation does not end there either. Grooming expert Jonathan said that he worked closely with production crew member Shay.  They checked all the salons available in Kansas online.

He then drove around Kansas with her to do their ocular three to four days before they started shooting.

“Shay and I get in the car. We drive all around and find ones that are local and have logistically enough space. That’s how we do it. It’s really very fun to get to see the beautiful salons in Kansas City. There are really so many great ones,” he said.

Jonathan also shared a tip on how to get shiny hair.  He said that the secret is to not over-wash it. Washing your hair every single day strips off its natural moisture and natural oil.

In episode three of season three, we met the Jones sisters and their famous barbecue sauce. The sisters made news recently after they sold 11,000 bottles of their barbecue sauce last month.  Antoni, who took them to the bottling factory, never discovered what the secret recipe was.

A reporter asked if he found out after the show.

“I was very familiar with it. But no, I never did figure it out. They were extremely secretive and understandably so, protecting their fathers’ trust,” he said.

Tan was also asked to give tips on what to wear this summer season.

He said that since layers are not really advisable when it is hot, you should find a piece that you could build around on.  He calls this his hero piece.

“And then the final summer tip is embrace color. Enjoy your black for Fall and Winter, but it is summer and it will be playful to see something fun,” said Tan.

They were also asked for self-care tips.  Jonathan said that you could treat yourself to baths every once in a while.  He admitted that he likes taking baths very much. Antoni, on the other hand, said that he learned that sleeping eight hours a day does wonders.

If you can make over a fellow expert, what will you do with them and who will it be?

Antoni: Ooooh! I would give Karamo a makeover and I would teach him how to eat real food.

Antoni: He likes gummy bears and soda.  He’s very proud of it. It bothers me about how proud of himself he is. I want to teach him the virtues of fresh fruits and juices and salad—and literally eating anything that’s fresh.

Jonathan:  “There is nothing I would change in any of them.  You know? And besides, they already fixed Bobby’s hair so there’s nothing for me to do, you know?”

Will you cut your hair for them?