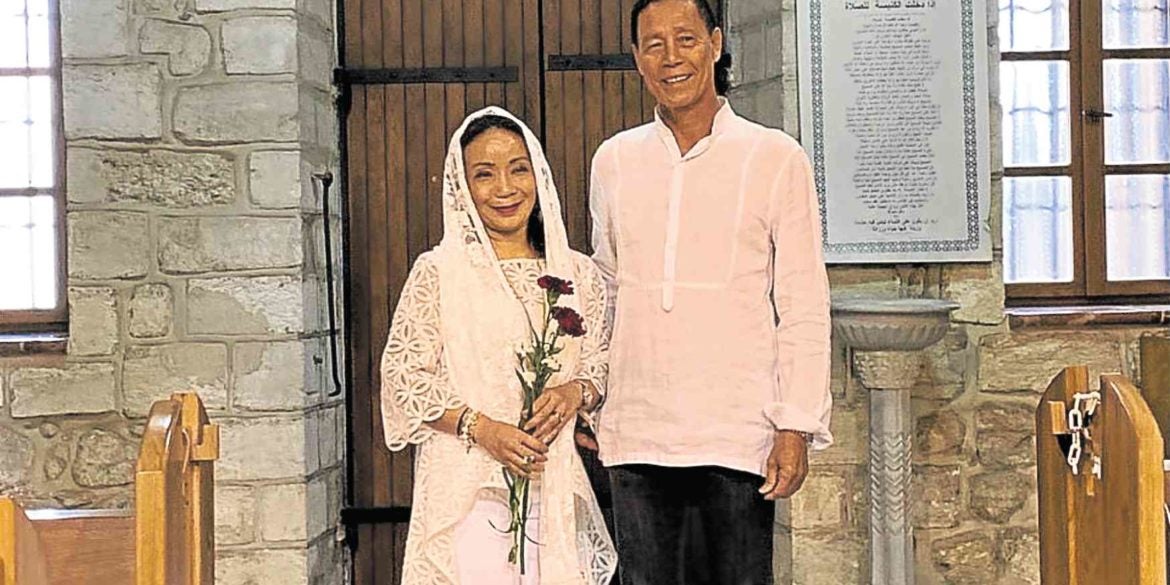 It has been almost eight years since Daddy (Ambassador Bienvenido Tantoco Sr.—editor) expressed interest to visit the Holy Land.

Three years ago, Maritess Pineda and I planned the trip, but somehow it did not push through. The conflict in Israel intensified and so we had to cancel, thinking of dad’s safety. Sadly, since then, dad had not been able to travel anymore.

This year, I told Maritess that we push through with the trip. At our meeting, after text communication with our co-pilgrims, the travel agency informed me that since my husband Renato and I were the only couple among 13 other women (Maritess, Patty, Lorna, Norma, Maricar, Emily, Mita, Cora, Marilen, Melanie, Lorna, Liza, Ana, Fr. Dennis Paez, Niño, Adrian), they would hold a Mass for our renewal of vows at the Church of Cana.

I was asked to bring something white I could wear and I excitedly told Renato to pack a white shirt. I brought something which caught my eye from Criselda’s latest fashion show. But not knowing what to expect…

Who would not be excited to have a renewal of vows—on the 15th year of our marriage—at the Church of Cana?  To me, it was a no-brainer.

Being married is not always a walk in the park. But seeing how other couples relate to one another has even strengthened my conviction. I have been told also that it is not surprising that my marriage has lasted. It boils down to knowing the multitude of good points versus bad—and choosing your battles.

Our renewal of vows took place on March 15 at the Church of Cana in Galilee. There I was, all giddy as a bride who was going to get married for the first time. I was thrilled because the church was exclusively ours. I never expected it to be this way. I thought we would be among many couples.

But when the wedding march played, I realized it was only Renato and I. I was ecstatic because I had never walked down the aisle, nor had I worn a veil in our two previous marital ceremonies. (Our first was a civil one officiated by then Makati Mayor Jejomar Binay in 2004, and a year later, by Msgr. Chito Bernardo.)

Father Dennis told us that instinctive love is replaced by authentic love—and how true that is.

More importantly, our renewal was held in one of the holiest places in the world, Cana. In the Miracle of Cana, Jesus, who was then attending a wedding, turns water into wine.

As every couple knows, marriage in itself is a miracle. —CONTRIBUTED