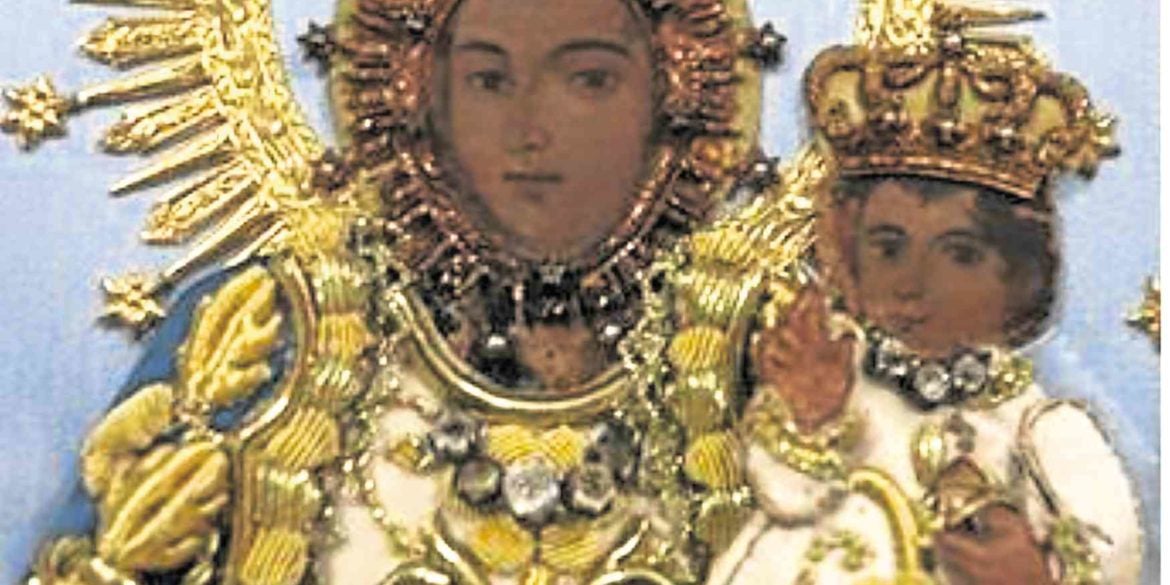 The image of Our Lady of the Rosary

Our Lady of the Rosary’s ‘miracle of the fire’

On April 16, 1854, a miracle, confirmed by the parish priest and the archbishop, took place in Barrio San Miguel, Manila, when a great fire burned everything to the ground.

Everything except for a visita. The humble little chapel, no more than a nipa hut surrounded by grass, built in 1851, held the portrait of Our Lady of the Rosary carrying the Christ Child.

The oil painting is 40 centimeters wide and 50 cm high (15.7 x 19.6 inches), with its frame wrought in silver. A thick blue cloth mantle richly embroidered in gold cloaked her original painted-on crimson gown. (An article translated from Spanish in 1904 described her gown as being of white silk. From time to time, devotees would cloak the Lady in various expensive garments.)

How the nipa visita could have survived a huge fire that consumed every building surrounding it called for an investigation, ordered by the archbishop. He asked the parish priest of San Miguel to investigate the event, “so that it may be consigned to the truth by the competent authority to prevent being distorted with arbitrary and false traditions.”

Six witnesses’ testimonies were taken by the parish priest.

So violently vicious was the fire that firemen had to take a roundabout route to reach it; an assistant to English engineers attested, describing how, all around the hermitage, the structures surrounding it had been consumed by great flames. Also, that the fire was virtually out by the time the bomberos arrived.

“Everyone said it was a miracle,” the gobernadorcillo said.

A third witness testified that even as his house burned to the ground, he was “astounded when, as the fire neared the ermita, the fire suddenly was extinguished… Even the grass surrounding the ermita did not lose its freshness.”

A fourth witness, Don Antonio de Ayala, a Spanish peninsular and businessman, said that “the wind went on her (the chapel) with great force with no aid of water pumps that would help to save it,” despite the fact that “the passages on either side of San Miguel and Quiapo were impossible to penetrate.” His impassioned testimony, a testament to faith, like the rest of the witnesses’ accounts, concluded by saying that “I believed that only God, who can do everything, would save the camarin.”

Several witnesses similarly described “a strong wind that came from the east,” but stopped short at the visita, leaving it totally intact. “The day after the fire,” the fifth witness testified, amid great rejoicing by the Lady’s devotees because the visita was saved, some offered candles “and others, alms, and some pulled the grass surrounding the ermita,” saying that “it could be used for medicine.”

Doña Isabel Frias, a Spanish mestiza, said her house was burned, but though it was only eight yards from the side of the ermita, “with the wind blowing hard and flames from my house and others beside the ermita were about to fall on the chapel… the ermita was saved” without any help from other people or firemen.

On the parish priest’s turning over the testimonies bearing witness to the miraculous event, Archbishop Francisco G. Ortiz ordered the original document kept in the archbishop’s archives.

The miracle so impressed the governor general, that he ordered a stone chapel built on the site to replace the nipa hut visita.

These accounts were translated in 1904 from the book “La Virgen Maria Venerada: en sus Imagines Filipinas.”

In the 1940s, fearing the stone chapel could crumble, Doña Florencia G. Barretto caused the present structure to be built in concrete. Her granddaughter, Carmencita L. Cu Unjieng, is the capillita’s present custodian.

A story handed down through the ages tells of a Spanish high government official who sat in a tub of warm water in his bathroom to relieve stomach troubles, as his physician had advised. Suddenly, from out of nowhere, a lovely lady holding an infant appeared to him. What he needed, she said, was grass growing around a particular nipa hut which, when boiled and drank, would help him recover. With that, the lady disappeared.

The official ran to ask whether the guard had seen a lady come through the gate, but the guard said he had not. The Spanish official then sent for the grass, followed the mysterious lady’s instructions, and recovered. He himself then went to the visita, the nipa hut, where he found the same lovely lady and child at the altar. It was Our Lady of the Rosary.

Is it any wonder that after the fire in 1854, people collected blades of grass for medicinal purposes, as the original story of the miracle had told?

Our Lady of the Rosary’s two feast days are on April 16, the miracle of the fire, and the Sunday after Easter Sunday, April 28.

This year, the Novena to Our Lady of the Rosary will commence at 7 p.m. on April 16, then skip Holy Week, resuming Easter Sunday Mass at 8:30 a.m. and succeeding days at 7 p.m. until Sunday, the 28th of April, when Mass will be at 8:30 a.m. After Mass and the final day of the novena, a small procession will be held in honor of Our Lady of the Rosary.

To get to the capillita, traveling north on Ayala Bridge, turn left at its foot which is Carlos Palanca Street (formerly Echague). The white concrete chapel is 200 meters away on the right-hand side.

The Blessed Virgin Mary will be at the Capilla. Barangay 645/646 will assign people to push image.

Novena and Feast of Santo Rosaryo Chapel/Masses care of BEC: