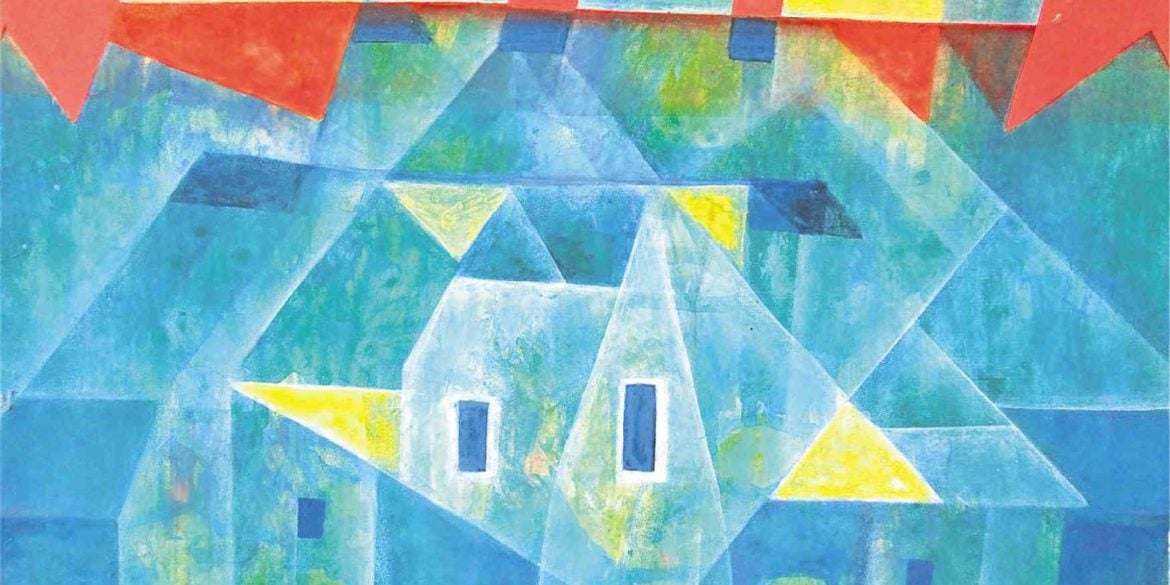 “Line of Vision” by Romeo Gutierrez

A tale of two artists

An Amorsolo in the family was Col. Jose Gutierrez’s dream—not a painting, but an artist child. He himself did some paintings and illustrations, although he was an engineer at the Philippine Military Academy.

Today, his son Romeo Gutierrez, who tried his best to be his father’s son and a “good realist,” is mounting his 39th solo exhibit at CM Arts Gallery in Quezon City, 50 years after his first.

He did not become an “Amorsolo,” however. “I needed to be me,” says Gutierrez, “and have a style and identity all my own.”

He experimented on several modern techniques like collage and assemblage. But one can never escape being influenced by other artists. In his case, they were Manansala and Malang, Picasso, Monet, and Chagall.

His search for his own style took him through his blue-green, brown and black and white periods, and to themes ranging from parapsychology to mother and child, family, and birds in flight.

In each of them, he showcased years of mastery and devotion to his art.

He is now focused on imaginary landscapes, still melding abstraction and representation in what he calls his “figurative abstractions.” “Highrise,” an 18” x 24” acrylic, is an imagined high-rise building in all its beauty.

Gutierrez is now in his 70s, and gave his family a scare last year when his colon needed surgery. It lasted for 12 hours. A week later, he was back in his studio, painting most of the 42 works exhibited now at Impressions Gallery, SM Megamall.

How did he come up with such a variety of pieces in so short a time?

He stares at an empty canvas and coats it with a layer of light paint. He then covers it with a second layer, which appears to him as images eager to reveal themselves.

A third layer gives his work a luminous, stained-glass effect. “In short,” he says, “I simply follow my heart. My intuition is a God-given gift.”

This gift has brought him numerous awards, local and international. He was among the National Commission for Culture and the Arts’ Ten Outstanding Visual Artists of 1994.

At the 1993 6th International Print Biennial in Taipei, he was among the finalists.

An art educator, he taught for more than 30 years at the College of the Holy Spirit, and was awarded Natatanging Edukador Pansining by the Bakusi Foundation, as well as Outstanding Alumnus of the University of Santo Tomas in 2016.

With works now displayed at the National Museum, the Cultural Center of the Philippines, and corporate buildings, institutions and prominent homes, the outstanding artist simply wants “to continue painting, do one-man exhibits, and perhaps launch a retrospective.”

Gutierrez’s message to young artists today: “It is important to have a touch of something different in whatever style you do.”

Azor Pazcoguin’s father owned an art gallery in Ermita, Manila. Once, in high school, he displayed a painting he did in the gallery. A tourist bought it. Encouraged, he made another one. Again, it was sold—fast. The cycle continued.

But he actually dreamt of becoming a doctor of medicine, and took up physical therapy (PT) as his premed course. Upon graduation from the University of the East, he started working as a therapist at the Manila Doctors Hospital. He continued painting on the side.

After two years of working in the hospital, he felt that painting felt more fulfilling. He decided to give up his job as PT and become a full-time painter.

At age 42, he has had seven solo exhibits, three two-man shows, 19 invitational shows, and 30 group shows. “I’m most productive when I’m happy,” he says, “and I’m happiest when I’m able to produce a piece.”

Pazcoguin’s seventh solo exhibit, “No Gray Wall,” opens at the Artistspace, Ayala Museum, Makati on April 30. The show is based on his personal experience of observing and analyzing life as it unfolds.

“There is no gray wall,” he says, “simply because there are no gray walls. They’re either black or white, a ‘yes’ or a ‘no,’ either in or out.”

He uses the wall as a symbol, because on the streets of Ermita and Malate where he grew up, he keenly observed life at its rawest, as plastered on walls.

On those streets, he learned how to choose what mattered most. “And when you play neutral or gray, reality is set aside,” he says. “We tend to stay in our comfort zone and play safe. We lose the challenge.”

His paintings in this exhibit, framed in graffiti, show almost defaced people with haunting expressions. He says: “They each have their own role to play, but at the end of the day, they do not play safe, do not remain doubtful, do not choose to be neutral nor gray.”

This very show, he points out, “makes me realize that our comfort zone could turn into discomfort.”

A much-sought after artist, Pazcoguin has been featured at BenCab Museum’s annual RE:VIEW for four consecutive years since 2015, and at ManilArt’s Arte Pintura Gallery since 2010.

He was also included in the exhibit “New Artist + New Works = New York” at the Philippine Center Gallery at Fifth Avenue in New York City in 2003.

He was a nominee for the 13 Artists Award of the CCP in 2006, the same year he was named a Master Visual Artist by the Living Tools and Development Corporation in partnership with Monde-Nissin Corp.

He was also a nominee in 2009 for The Next Wave of Ateneo Art Awards.

An art teacher for five years for the oil painting workshops of Arte Pintura Gallery, Pazcoguin says that “art is life.”

His advice to young artists: “Just continue painting and exploring, then everything will follow. Do not be afraid to try new things. And move away from your comfort zone.” —CONTRIBUTED

The author is the president of the Maningning Miclat Art Foundation Inc., a nonstock, nonprofit organization, which is holding its ninth biennial Maningning Poetry Competition this year for poets 28 years and younger. Deadline for submission is on April 30. Visit www.maningning.com and Facebook, Maningning Miclat, Artist @brilliantmaningning . E-mail [email protected]