The gong and the kris: In Lanao, the art of the metalsmith lives | Inquirer Lifestyle ❮ ❯ 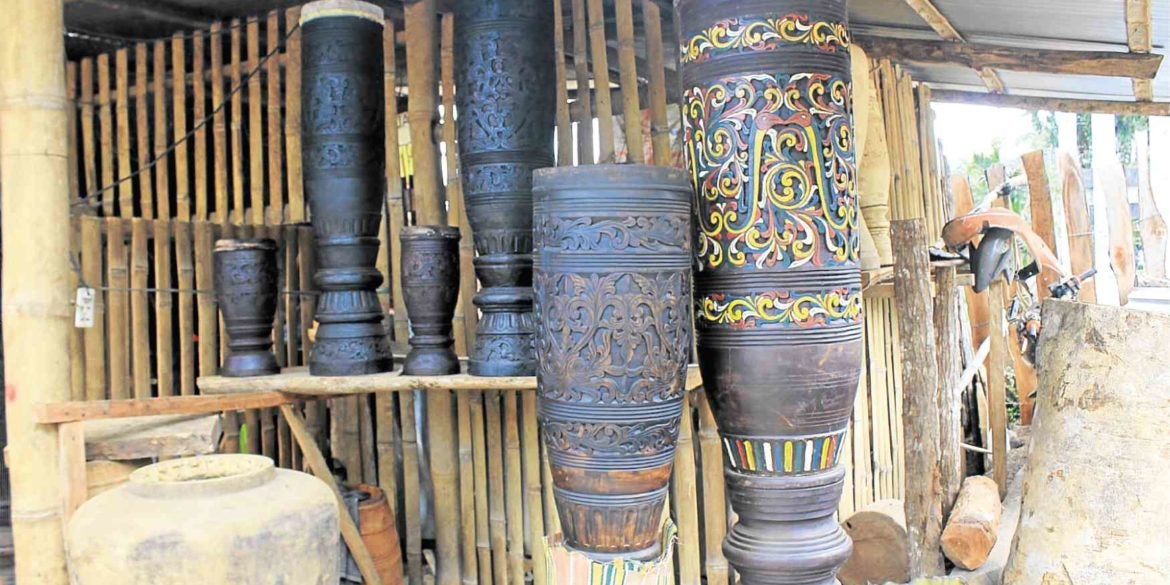 The “gadur” can take a year to make because of the painstaking sourcing of wood, the carving, the making of paint from plant dyes, and painting.

The gong and the kris: In Lanao, the art of the metalsmith lives

The backyards of Tugaya, a lakeshore town in Bangsamoro, are noisy in the daytime, as craftsmen hammer away to make musical instruments such as the horizontally laid-out brass gongs called kulintang, and the agong (a suspended gong). Sometimes they saw, carve and paint tall drums, called the gadur.

Although Tugaya is a fifth-class municipality in Lanao del Sur, it is ironically referred to as its industrial capital.

The 10- to 12-foot-high wooden gadur, which in modern homes is often used as a design element, is prized for intricate okir, sinuous patterns distinctive of Maranao art. The smaller drums are called dubakan.

Maranao artisans will tell you that those crafts are the only things they know. They’ve seen their elders forge metals using ancient methods and the same traditional tools.

Salic A. Pamlian, 42, says Tubakan has 10 metalsmiths who produce gongs. There are two to three craftsmen who work on gongs per household. He and his 75-year-old father-in-law, Tambas Pandita, would produce agong and dabur for traders.

Pamlian learned the craft at age 18, when he was strong enough to lift heavy objects and forge metal.

In ancient times, woodcarvers and metalsmiths underwent a rite of passage: A chicken was sacrificed to the god of the arts, Tominanman sa Ragon. The animal’s blood was poured on his hands and tools.

The ritual gave him the license to become a craftsman. Pamlian says that practice is unknown to his generation.

“We go straight to work,” he says in Tagalog.

Pamlian specializes in the agong, wide-brimmed brass percussion instruments that provide the bass and rhythm in a Maranao gong ensemble. Since brass is rare in Mindanao, entrepreneurs would buy sheets from Manila and provide these materials to the craftsmen.

He still uses traditional metal forging and hand shaping to produce the instruments. A large agong, weighing five kilos, takes eight to 10 days to make on a 7 a.m.-5 p.m. work schedule. The wholesale price is P15,000 but, on a lucky day, Pamlian gets a share of P4,500.

The smallest agong, weighing two kilos, takes two days to produce. For the price of P4,000, he and his father-in-law get a mere fraction of the amount.

These agong are sold around Mindanao souvenir shops and in antique shops in Manila at higher prices. Sometimes, foreigners visit his place to buy the instruments for their collections.

“Your earning depends on your output,” Pamlian says.

He also works on the dabur and its mallet which are made from mango and jackfruit wood. The drumhead is covered with cowhide or goat’s skin.

The Maranao drums can take a year to finish because of the intricate carving and the painting of the okir patterns. Its wholesale price is P50,000.

His three children, ages nine to 14, are still too young to learn these crafts.

“They’ve got to be older and build more muscle to do this heavy work. I will teach these crafts to my sons if they are not doing well in school. They have a livelihood to fall back on,” he says.

Asked if the job pays well, Pamlian says he’s lucky to earn P17,000 a month. Nevertheless, these crafts have supported his family over the years.

“We need money to buy raw materials. We ask from the municipal office, but nothing comes out of our talks,” he says. “You can’t depend on the local government for help. Artisans fend for themselves. But despite all the odds, this work gives us joy.” —CONTRIBUTED