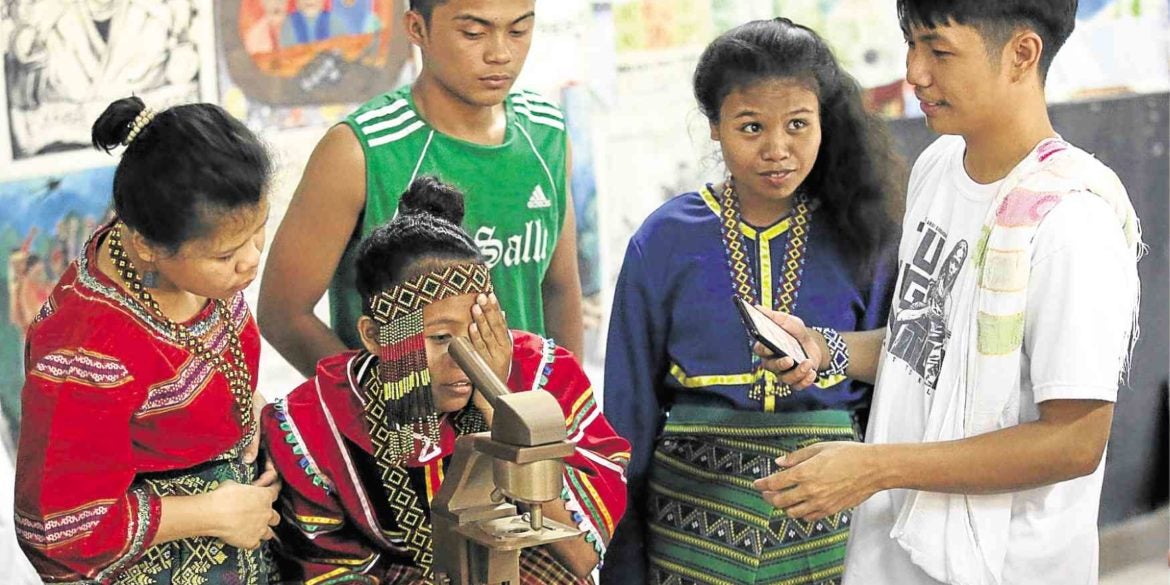 Lumad Bakwit School: A school on the run

When soldiers parked the tank in front of her lumad school in North Cotabato, Kat-kat knew it was time to leave her village.

Run by a religious NGO, the school was accused by the military of being a communist front.

“A colonel came out on the radio saying we were an NPA school,” Kat-kat continues. “We challenged them to come to the school and observe. All we were being taught was how to improve the economy in our communities. Nobody came.”

Under constant threat of closure, or worse, Kat-kat joined the exodus of lumad students facing similar circumstances known as the Lumad Bakwit School.

Bakwit is the vernacular for “evacuate.” The Lumad Bakwit School is basically a school for refugees from the increasing militarization in Mindanao—a school on the run, as it were.

Since the declaration of martial law in Mindanao, 85 lumad schools have been closed, affecting as many as 3,000 students, according to Rius Valle, a spokesman for the Save Our Schools (SOS) network, an alliance of NGOs formed to defend the lumad students’ right to education.

“It’s a campaign to show the rest of the country the state of the lumad schools in Mindanao,” Valle says. “At the same time, lumad students are able to continue their studies.”

When members of a paramilitary group came to her lumad school in Talaingod, Davao del Norte, asking for her and her teacher by name, Rorelyn, 18, walked four hours in the dark, evading paramilitary checkpoints, until she reached safety in another village. It was then that she decided to join the Lumad Bakwit School.

“In the lumad school, we had classes even on Saturday and Sunday,” she says.

Being on the move, it’s hard to keep a regular schedule.

“We put up with it because we believe we should continue to study even if we’re not in our school,” Rorelyn says in Tagalog. At least here in Manila, many more people can learn about the plight of lumad schools in Mindanao, she adds.

Being constantly on the move is difficult, says Jenny Rose, 21, one of the volunteer teachers with the Lumad Bakwit School. Apart from holding classes when they can, the students also join rallies in order to bring the plight of the lumad schools to a wider audience.

Being a teacher at the Lumad Bakwit School means going above and beyond what is normally asked of a teacher, says the BS Mathematics graduate, who normally teaches Math, Science, Social Studies and English from Grades 7 to 10.

Still, she is inspired by the fighting spirit of the students, and is amazed at how “woke” they are for their age.

She herself has experienced the effects of militarization as a lumad teacher. Before she joined the lumad caravan, a group of men abducted her mother and held her for 18 days, she says, to serve as a warning to her.

Since leaving Mindanao last August, the lumad caravan has encamped in the Union Theological Seminary in Cavite, Baclaran Church, the University of Santo Tomas, St. Scholastica’s College, the Iglesia Filipina Independiente, Letran University and various colleges of the University of the Philippines campus in Diliman.

“They offer sanctuary and a place for learning,” says Valle.

Being far from home can have its advantages. In Manila, the lumad students encounter a wider variety of learning experiences than they would have had back home. They were able to peep through the telescope of the UP Observatory, for instance, and dissect frogs in the university’s biology laboratory.

The students also enjoyed field trips to the National Museum and the Mind Museum.

Instructive, too, are the times when they have to speak out on behalf of their people. There are times when they put on their tribal finery, mindful of the fact that they are representing the lumad to the people of Metro Manila. The learning goes both ways.

Even with these distractions, however, the lumad are ever mindful of their plight, and the even more precarious situation of their kin back home.

“With the continuation of martial law in Mindanao, there has been an increase in military deployment,” says Valle. “Civilians are being gathered and forced to admit to being rebels; schools are closed, burned or destroyed; human rights defenders and teachers are facing trumped-up charges.”

At the root of these concerted attacks on the lumad education system, says Valle, are vested interests eyeing the exploitation of the natural resources within the ancestral lands of the lumad, which are protected under the Indigenous People’s Rights Act of 1997.

“The lumad cannot live anywhere else because their culture is rooted in their ancestral domain,” says Valle. “The [lumad] schools are a hindrance to their plans because the people know that large-scale mining and logging operations and monocrop industrial plantations destroy the ancestral lands that provide the livelihood for the lumad. The lumad are farmers and if they lose their land, it is not only they who will suffer as watershed areas and forests are cut down. The Pantaron range, the last remaining habitat for the Philippine eagle is being threatened by mining.”

The last thing these vested interests want, suggest Valle, is an educated and enlightened lumad population who can assert their rights under the law, which is why the lumad schools are under sustained attack.

Meanwhile, the students of the Lumad Bakwit School dream of the day when they can return home.

Rorelyn wants to become a teacher after she finishes her studies, so she can share what she learned with younger lumad students.

Kat-kat, mature beyond her years, is eager to put what she has learned into practice.

“Education has meaning only if it can help build a free society,” she says in Tagalog. “We can’t give up because that is the only weapon we have to achieve our goals for the succeeding generations.”