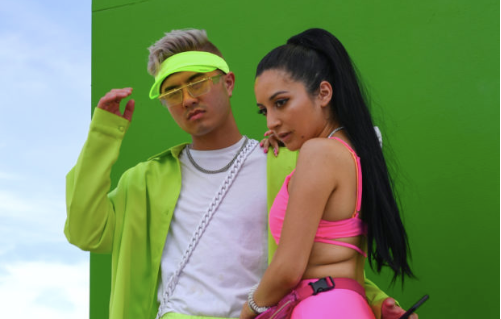 With the first weekend of Coachella ringing in festival season on April 12 and 14, we got a preview of the fashion trends that will resonate through the summer’s music gatherings. Neon (especially yellow), tie-dye and fringes seem to have struck a chord with festival-goers, according to the trends surveyed on global fashion search engine Lyst.

Festival season is the perfect occasion to see runway trends in the wild, and this remains true for Spring and Summer 2019. It is no surprise, then, that neon colors made a splash during the first weekend of Coachella 2019.

According to Lyst, searches for Day-Glo shades has blown up by 275% compared to the same period last year. Among the celebrities who shone the brightest last weekend were Winnie Harlow, Katy Perry and Joan Smalls.

A close cousin of neon, tie-dye also made the rounds this season, with the search engine reporting a 388% increase in searches for the trend, compared with Coachella 2018. Stars like Justin Bieber, Gigi Hadid, Virgil Abloh and Romee Strijd have been seen letting their freak flag fly in super colorful, psychedelic duds.

A staple of the Indio, California festival, fringes cut themselves loose all through the first weekend of the 2019 edition, with many attendees sporting the trend, which was also a mainstay on Spring Summer 2019 catwalks. Lyst reported a 146% rise in searches when comparing with Coachella 2018 — look no further than Shay Mitchell, Alessandra Ambrosio and Kacey Musgraves for proof that living on the fringe has its benefits.

Denim, western style and maximalism were among the other trends noted by Lyst.

To come up with these trend reports, Lyst analyzes the search habits of the 5 million monthly users who query its platform and/or shop online through its services, as well as emerging micro-trends found and social media posts, among others. CE/JB