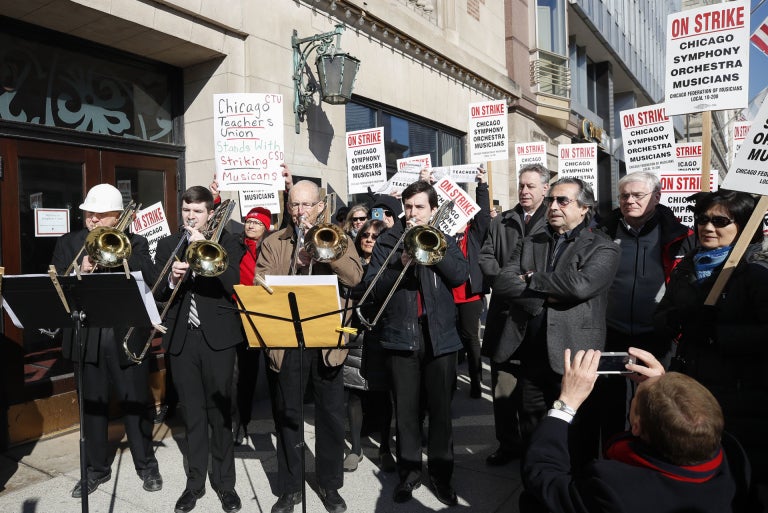 Chicago Symphony Orchestra conductor Riccardo Muti (3rd R) joins striking members of the Chicago Symphony Orchestra as they picket outside Symphony Center on March 12, 2019 in Chicago, after 11 months of pay talks failed to reach an agreement. - The musicians say the company is asking them to reduce overall salary and benefits despite increasing revenue from sales and donations. Image: AFP/Kamil Krzaczynski

The Chicago Symphony Orchestra will likely end its seven-week strike after the city’s mayor Rahm Emanuel intervened to broker an agreement, his office said Friday, without detailing the terms.

The musicians’ association said it would vote to ratify the deal last Saturday, noting that it had yet to be briefed on the contents.

The high-profile walkout over salary and the future of the players’ pensions triggered the standoff in early March.

“I am pleased to announce that, after convening both parties at City Hall for a successful negotiating session, the management and the musicians have reached an agreement in principle to bring the music back to Symphony Center,” Emanuel said in a statement.

“The symphony is an integral part of Chicago’s rich cultural fabric, but its economic impact extends beyond the musicians and management to the stagehands, ushers, restaurant servers and hotel workers whose livelihoods depend on a thriving symphony,” he further stated.

In a joint statement, the musician’s association and orchestra management confirmed they had reached a “tentative agreement” and thanked Emanuel for his mediation.

Despite their impasse with management, the striking musicians had put on free shows for fans, hundreds of whom had gathered in a union hall in the Midwestern city.

Labor organizers along with the classical music world — struggling with the converging trends of rising costs and shrinking, aging audiences — watched the strike with great interest, viewing it as a potential bellwether for other important companies.

Since 2011, revered orchestras in Detroit, Pittsburgh, Philadelphia and Minnesota have all experienced labor strife. Chicago last went on strike in 2012.

The orchestra’s board of directors had said it wants to protect the orchestra’s finances, claiming pension costs have skyrocketed and will soon be unaffordable.

But musicians had said the orchestra’s financial position is healthy and the traditional pension plan is affordable.

“This is about the future” Steve Lester, chair of the musicians’ negotiating committee, said in March. “This membership is very determined.” JB

Jimmy Page reflects on Led Zeppelin’s legacy and its sound

Latin pop has US grooving more and more in Spanish