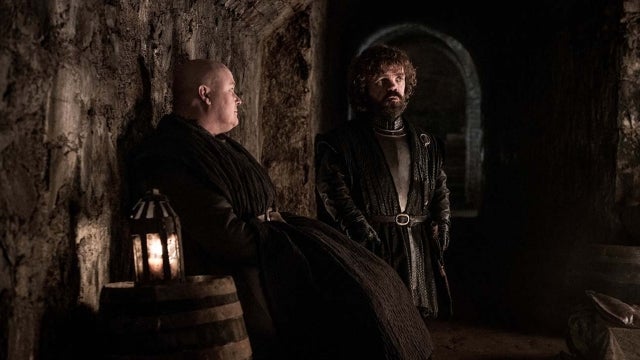 Rarely does an episode of 'Game of Thrones' pass without one of the characters sipping a goblet or three, with Tyrion Lannister (played by Peter Dinklage, right) a particular fan of the vintage from the southern kingdom of Dorne. Image: Courtesy of HBO

Looking for something to toast the final run of “Game of Thrones”? A French winemaker and fan of the epic fantasy series has developed his own version of Dornish wine, the favored tipple of Tyrion Lannister.

“Dark as blood and sweet as vengeance” — such is the wine favored by the nobles of Dorne, one of the seven kingdoms in the fantasy world of Westeros where the sweeping saga is set.

Rarely does an episode pass without one of the characters caught up in the savage struggle for the Iron Throne sipping a goblet or three, with Tyrion Lannister a particular fan of the vintage from the southern kingdom of Dorne.

For Thibault Bardet of the Vignobles Bardet winery in Saint-Emilion in France’s Bordeaux region, the idea began in 2016 while watching an episode featuring Tyrion — a central character known as “the imp” because of his diminutive stature — who is rarely seen without a glass in his hand.

“We thought: wouldn’t it be great to be able to taste what he’s drinking,” Bardet told AFP.

“I wanted to pay a special tribute (by creating) a wine that could be drunk in Game of Thrones. I didn’t try to make the best wine possible but the wine that was closest to the series,” he said.

A fan since the show was launched eight years ago, Bardet’s idea sparked the creation of two specialist wines: a “Dornish Wine” and another called “The Imp’s Delight”.

The series, which premiered in the United States in 2011, is an adaptation of five fantasy novels by George R.R. Martin, with the eighth and last series now showing in 186 countries.

After checking online that no such wine already existed, Bardet decided to try and reproduce it, but that took some work.

“There is very little about it in the series. But in the books, it’s huge. I simply copied and pasted all the references to the wine. It amounted to 40 pages,” the 29-year-old said.

Even so, that was just a fraction of the thousands of pages penned by its American author, who so far has finished five volumes, with a sixth and final tome still pending.

With all the available facts at hand, Bardet went to see his father, who handles the technical side at the winery.

The red sun of House Martell

In the books, Dorne is known for its arid, desert-like terrain, and the grapes used to make “The Imp’s Delight” were grown in a sandy plot within the Saint-Emilion estate, while the “Dornish Wine” is a Castillon Cotes de Bordeaux.

The smallest grapes are chosen for their concentrated flavor, and the wine is kept in casks for a time to both enhance its flavor and to recall the Middle Ages, the era the saga reflects.

And to get further into the spirit of the series, there are no sulfites in “The Imp’s Delight” which Tyrion promises to give to his friends after the war ends — which gives the vintage “a more intense purple hue” and a “slightly bolder flavor”.

Even the label is stylized — round like the shields of Dorne, but also bearing two golden lions, the seal of House Lannister.

The “Dornish” label is orange and bears the sun motif of House Martell.

Even the bottle’s design is different, with the wine presented in rounder, heavier bottles and sealed with a wax capsule rather than foil at the top.

But like the series, the wine could soon be on its final outing after a challenge from HBO, which is likely tied to the fact that the network already has an official supplier of four wines linked to the series.

It has, however, allowed Vignobles Bardet to sell its remaining stock of 15,000 bottles to wine dealers or individuals, mainly in Europe.

And Bardet is hoping to send several bottles to the author of the series as well as to its main actors.

And himself? He likes to watch the series with a group of friends over a bottle of each vintage.

Game of Thrones and economics: Arya’s got skillz