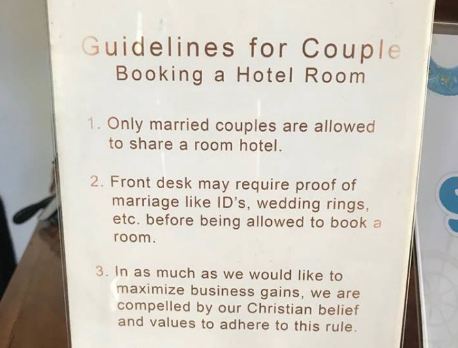 A hotel in Iloilo released a statement regarding its policy that only married couples are allowed to share a room in the establishment.

The hotel went viral after a photo of its policy was shared online, which showed pictures of the ABS-CBN teleserye “Halik”. The series stars Jericho Rosales and Yam Concepcion and tackles infidelity among married couples.

The hotel apparently took photos from the internet of the cast of “Halik” to use for its policy guidelines, but said it properly credited the network as source below the ads.

“We did not use the photo ad for any commercial purposes or even posted it online in any social media page for economic gain,” Ephrathah Farm stated via Facebook on April 18.

Official Statement of Ephrathah Farms Regarding a Viral PostGood day in the name of the Lord!It was not the…

“We have a different poster we display in our front desk so our guest will be guided accordingly. We say ‘internal’ because we only show it to our guest who insist on booking a hotel room and who question this type of rules for a hotel,” the hotel added.

The hotel explained the reason behind the married couples only policy, saying it honors the sanctity of marriage. Its administrators also said they screen their guests and deny entry to those who are only planning for a short time or engage in extra-marital affairs

“We further believe that ‘SEX’ should be done in the confines of married people only,” Ephrathah Farms said. “This is the reason we screen guests of opposite sex wanting to check-in our rooms so that we can deny entry to couples whose intentions are for ‘Short Time’ stay only or to do extra marital affairs.”

The hotel shared photos of their guidelines for couples which mentioned front desk may require proof of marriage from guests, such as IDs and wedding rings, before being allowed to book a room.

“As much as we would like to maximize business gains, we are compelled by our Christian belief and values to adhere to this rule,” the guidelines read.

The hotel has since earned the approval of people, who lauded it for standing for its faith and beliefs.

“I really salute the owner and administration of this hotel for upholding our Christian values most especially for giving importance to the sanctity of marriage,” a certain Eliseo Silla wrote.

“I [support] this business move and will do the same,” said a Jean Magno Palabrica. “Good luck to Ephrathah Farms and to the people behind it.”

“And what about married same-sex couples?” asked a certain Fate Mynl. “I guess you would be okay with their use of your facilities too?”

While Ephrathah Farms did not mention any policies regarding married same-sex couples, they did note in their statement that they do not force guests to check-in with them.

“There are other [businesses] that can serve guests that can’t comply with our rules…” the hotel stated. “Although people may say that this is a bad business decision, our faith in God is greater than money. We have been operating for the last 6 years and this has been our rule since day one.” JB

The eternal flame of Philippine motels