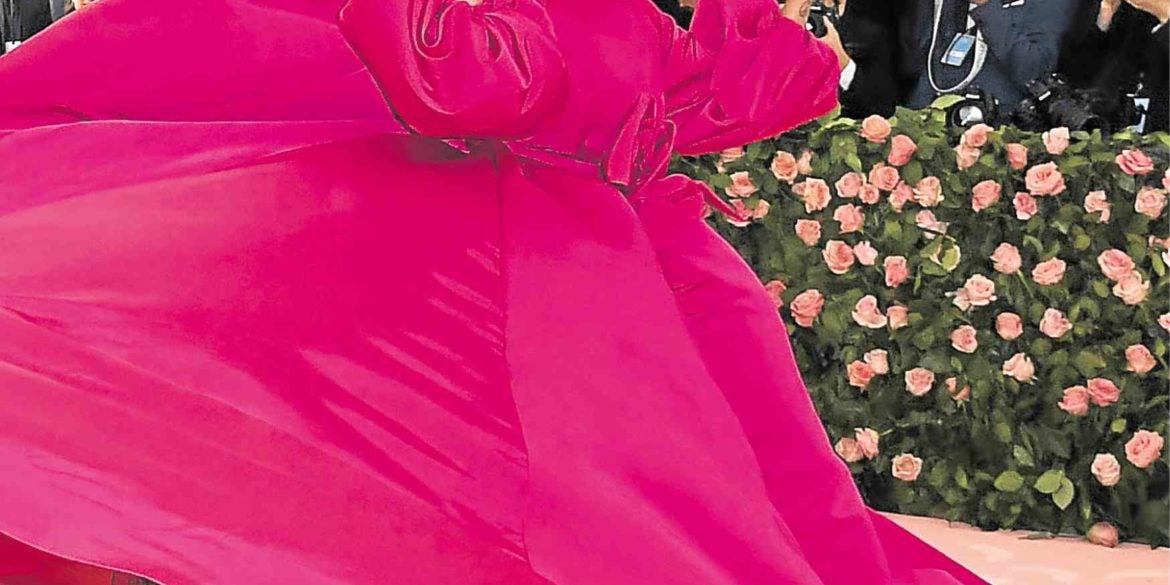 Lady Gaga arrives in not just one but four outfits by Brandon Maxwell. —afp

It’s a difficult task to choose the best dressed when the event theme’s basic premise is, “It’s good because it’s awful.”

But that’s exactly what this year’s Met Gala challenge was to its guests—and us, mere spectators: to find the best dress for an occasion that celebrates the “love of the unnatural, of artifice and exaggeration,” of “travesty, impersonation, theatricality.”

That, in a nutshell, is “Notes on ‘Camp,’” American writer Susan Sontag’s 1964 essay and the inspiration behind New York City’s Metropolitan Museum of Art gala fundraiser May 7, and its Costume Institute’s newest exhibition, “Camp: Notes on Fashion,” which opened to the public May 9.

So who were so awful that they were so good? In every Met Gala, you can expect two things: One camp will play it safe (hello, Tom Brady and Gisele!) while the other will ham it up for the camera (mostly pop royalty and Jeremy Scott).

Taking our cue from Sontag, here are our own notes on Met Gala 2019:

“Camp is art that proposes itself seriously, but cannot be taken altogether seriously because it is ‘too much.’”

Was there anyone more “too much” than Gaga? The singer-actress arrived in not just one but four outfits, and performed upon arrival on the pink carpet.

The visual feasts that were Ezra Miller, Cara Delevingne, Janelle Monae, and the almost unrecognizable Lupita Nyong’o brought the high art, pop culture, and glamour mix on the carpet.

“Again, Camp is the attempt to do something extraordinary. But extraordinary in the sense, often, of being special, glamorous… Not extraordinary merely in the sense of effort. Ripley’s Believe-It-Or-Not items are rarely campy. These items… lack the visual reward—the glamour, the theatricality—that marks off certain extravagances as Camp.”

These guests brought the razzle and dazzle. Cher didn’t walk the pink carpet, though she did surprise guests with a pocket performance. Celine Dion, Ryan Murphy, Gigi Hadid and Naomi Campbell were the boldest Vegas headliners, while Kylie Jenner, Emily Ratajkowski, and Amber Valetta were the nymphs of camp.

In head-to-toe gold custom Michael Kors, Emily Blunt was a sight to behold. Florence Welch in Gucci was stunning, and Laverne Cox was also a revelation in her Christian Siriano creation. These three managed to look chic and campy at the same time.

The Joan Collins, of course, deserves her own definition of camp: that of glamour and frivolity, and in her Valentino feathered frock and tiara, she was her own “Dynasty.”

Is there anything campier than having your face printed on your dress—and with a Statue of Liberty headdress to match? That was Diane Von Furstenberg. And then, there was Hamish Bowles’ cape, which was extra everything.

“When something is just bad (rather than Camp), it’s often because it is too mediocre in its ambition.”

For a theme like camp, the “worst dressed” were those who did not try enough.

Constance Wu looked like she received advice on the theme too late and so decided to just make up for it with the makeup.

Sarah Paulson in Moschino disappointed because we were expecting much more from this red-carpet favorite. Take away the hair and makeup and it’s Paulson at the Golden Globes.

A supermodel like Karlie Kloss surely could’ve done better than a mini-dress with pouf sleeves. And Katy Perry—sorry, but we just didn’t get it. That was not camp; it was costume. —CONTRIBUTED