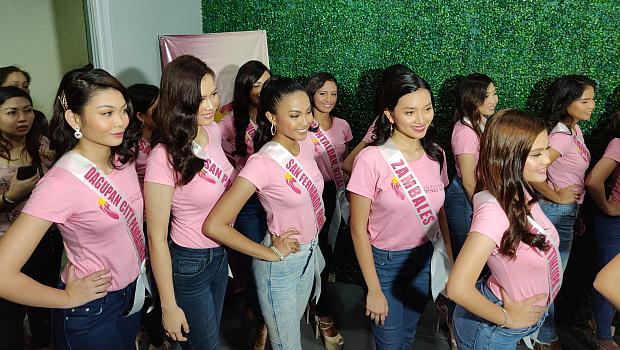 The inaugural Miss Teen Tourism Philippines pageant attracted 34 aspirants from all over the country. (Photo by ARMIN P. ADINA / Contributor)

MANILA, Philippines — They may be too young to cast their votes in the May 13 midterm elections, but some candidates of the 2019 Miss Teen Tourism Philippines pageant still shared their advice to the electorate and to those seeking public office.

INQUIRER met the 34 candidates to the pageant’s inaugural edition at the All Corners multi-purpose space at West Insula in Quezon City earlier this month and talked to some of them to get their thoughts on social issues.

Ian Aliezea Mendenueta from the town of Tiwi in Albay and Christine de Guzman from Mandaluyong City both cited pregnancy as the biggest issue facing teenagers nowadays.

“The government should give seminars to the parents. After all, the parents are the first teachers who can hone the children to become better versions of themselves. And they can lead their children to the right path,” the 17-year-old Mendenueta said.

De Guzman, who’s also 17, said: “Teenagers find it easy to commit to a relationship. They’re aggressive, they are deprived of advice on sex, and they do not study sex education.”

For Keziah Maru Pasion of Camarines Sur, the government should focus on depression among teenagers.

“I think there is a generation gap when it comes to depression, because I hear a lot of older people saying that it wasn’t an issue when they were younger,” the 18-year-old student said.

“More teenagers think of a lot of things because of social media, everybody’s interconnected. They are easily influenced by what they see, which causes a lot of envy, insecurity and higher expectation from society,” Pasion explained.

The three aspirants also voiced out their opposition to the lowering of the minimum age of criminal responsibility, a legislation gaining ground in the House of Representatives.

“I always look at the positive side, or the reason why something has happened. Children commit crime not because they want to, but because they lack education, lack parental control, and lack motivation,” Mendenueta said.

Pasion agreed: “Children are not criminals. If you study child psychology, the mind can be formed at a certain age. So, if you expose the children to such an environment like the prison, they may be just like those in there.”

“I still see children in a positive light, even if they say criminals are getting younger. The people around them have the biggest influence on them, that’s why they commit such acts,” she said. “The parents should be punished, not the children. They may still be molded and they may still change.”

Mendenueta said: “Instead of putting them in jail, why won’t we just give them another chance or rehabilitate them. The government should create programs to hone them to become better citizens. I believe we all deserve a second chance.”

For the midterm elections on Monday, the teenagers appealed to voters to choose the better candidates.

“I want the voters to understand the real meaning of what government is. People think it is something superior, giving out orders, but it shouldn’t be that way,” Mendenueta said. “The government should be for the people. Having that kind of mindset as a voter will pave the way for them to choose a leader who can listen, who can connect to people, and who has a humble heart. Because humility is the greatest tool towards a successful leadership.”

For Pasion, voters should choose the candidates who “have a genuine heart to serve the country, know what they should be doing, and well aware of the issues on crime, on poverty, on the environment.”

De Guzman, meanwhile, advised the electorate to choose candidates who are “transparent, have empathy, concern for citizens, selflessness, and a good reputation.”

The three teenagers are among the 34 candidates vying for the crown of the Miss Teen Tourism Philippines pageant, which will culminate in ceremonies tonight at the Carlos P. Romulo Auditorium of the RCBC Plaza in Makati City.

The winner will be immediately sent to the inaugural Miss Teen Tourism International pageant, which will take place in the Philippines from May 19 to 31.

It was set to be staged in another country, but unforeseen circumstances forced the organizers to bring the global tilt to Manila.