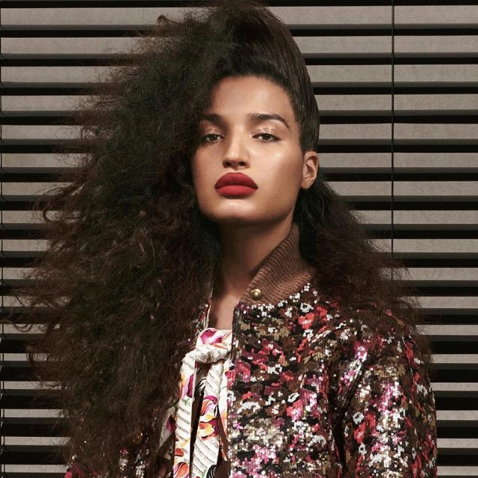 In 2016, Elle Magazine’s Brazil and United Kingdom publications featured a transgender person on their covers (Valentina Sampaiao and Hari Nef, respectively). For its June 2019 cover, Elle USA features American actor and model Indya Moore, who is non-binary and prefers to use “they” and “them.”

The 24-year-old, who plays Angel Evangelista in the FX television series “Pose,”  is the first transgender person to grace Elle’s USA cover. Sharing the news via Twitter, she said, “Thank you for having me as your first experience covering a trans person. I know I will not be the last. So excited to see Elle leverage their platform to help other talent of trans xp find visibility, & the safe space to be acknowledged & vulnerable in this powerful way.”

According to The Hill, Moore’s appearance on the cover “came as part of a feature story about the 24-year-old that focuses on, among other things, Moore’s childhood and her entry into the foster system at 14.” After leaving the foster system and becoming homeless, they auditioned for the “Pose” and luckily, were offered the role of Angel. In the feature, Moore also discussed the challenges they faced as a teenager, one of which was being offered money for hormone therapy in exchange for sex.

On the cover, they’re seen wearing Louis Vuitton, a fashion house that truly embraced them as Nicolas Ghesquière not only featured Indya in the luxury brand’s pre-fall 2019 look book—which also included Michelle Williams and Jennifer Connelly—but he also made them host Vuitton’s Paris fashion show.

Via Twitter, Elle editor-in-chief Nina Garcia also posted a photo of the cover, saying, “For transgender model and star of @poseonfx @IndyaMoore, survival mode has always been the default. “I don’t know who I am outside of someone who’s just trying to be free and find safety for myself and for others,” she told @ELLEmagazine”