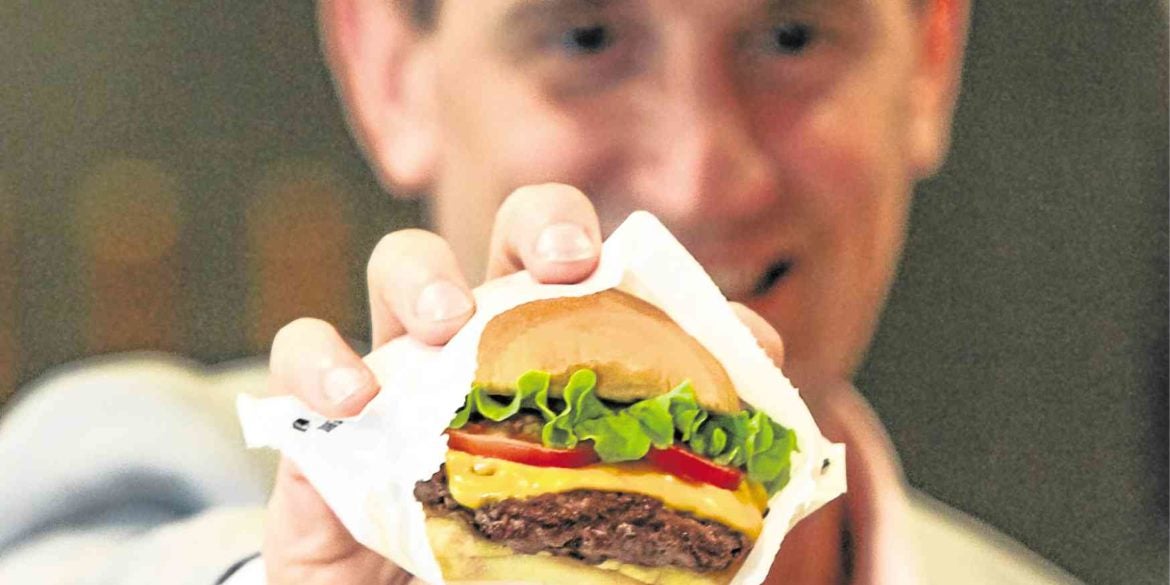 You shouldn’t eat a hamburger every day. But when you do, it should be a really good one.”

That was Shake Shack chief executive Randy Garutti’s advice, the day before the New York burger chain’s first Philippine restaurant opened at Central Square in Bonifacio Global City on May 10.

Also, you shouldn’t have to line up for hours for a cheeseburger—unless it’s a really good one. And Shake Shack’s is a pretty good one.

That’s our own advice, if you’re contemplating on joining the queue.

The restaurant has been open for a week today, and it won’t surprise us if there’s still a line. We went last Monday for a very late lunch after voting, and we stood in line for over an hour, thankfully mostly indoors.

Line starts outside the mall, where you’re given a ticket that allows you to order up to four burgers per ticket. There are marshals so the line is orderly, and there are employees serving cold water. There’s also a separate queue for seniors and PWDs.

Six years in the making

“It took us six years to make this happen. It’s very exciting,” SSI Group president Anton Huang told us pre-opening. SSI is responsible for bringing Shake Shack to Manila, its sixth market in Asia and 15th in the world. “It’s very different for us, even though we have other F&B concepts. The response has been incredible. The anticipation—it’s been phenomenal!”

On Day 4, we spotted Huang in the house, chatting with customers.

“There have been great learnings for us, not just from a business perspective,” Huang said. “Randy is a great leader and he has created quite a unique culture.”

Shake Shack is a familiar brand to Filipinos who travel overseas, and many who have tried it have become fans, this writer included.

Its classic ShackBurger is a frills-free beauty with a 4-oz patty, a slice of American cheese, its signature ShackSauce, lettuce and tomato, on a buttered potato bun. (Best enjoyed with cheese fries on the side.) It stays good and juicy even after a long-haul flight (take our word for it—just nuke for a few seconds).

“We’ve taken the classic American fast food and made it really good. We call our restaurant ‘fine casual’ because we’re using the best ingredients for the humble cheeseburger.”

A Shake Shack burger is the same in all locations, he said. “People have different tastes in every market. But they want us to be Shake Shack, not a local version of Shake Shack. They want the taste and flavor that’s popular around the world.”

To maintain this, the main ingredients—beef, potato buns, frozen custard, fries and bacon—are imported from the US, and some from Australia. The restaurant claims to serve beef that’s hormone- and antibiotic-free, non-GMO potato buns, hormone-free milk, and no high fructose syrup. The produce is sourced locally, and it has local partners for some products like desserts and brews.

The restaurant, however, has only one meat-free offering, its popular ’Shroom Burger, a crisp-fried Portobello mushroom with melted muenster and cheddar cheese. There are no plans to expand on vegan options at the moment, Garutti said.

“The world has always been somewhat health-conscious in a way, but we still love cheeseburgers, shakes and fries. So when you eat that way, make it a good one,” he added.

SSI Group fought to make Shake Shack in Manila affordable—it’s the third cheapest in the world (P250 for a ShackBurger; it’s about P352 in Singapore)—so that Filipinos get to enjoy a good burger anytime, not just as a special-occasion treat, according to SSI marketing and communications manager Mitch Suarez.

Huang said they have already received invitations for new Shake Shack locations, though “nothing is set. We should first get this (Central Square) right, and take it from there.”

Shake Shack began as a hot-dog stand at Madison Square Park in 2001, by a restaurateur named Daniel Meyer, who ran fine-dining restaurants. The hot-dog stand was a philanthropic project meant only to raise funds for the park.

In 2004, it opened the first restaurant in the middle of the park, where it started to get very long queues.

“We never dreamed we would have a second location, let alone here in Manila,” said Garutti, who joined the company 20 years ago and was named CEO in 2011. The company went public in 2014 and Garutti is credited for growing it to what it is today. Global expansion began in 2015, two years after talks with SSI began.

“It took time,” said Huang. “They weren’t ready to expand internationally, and others were also talking to them. I understood that had they agreed to do it earlier without the kind of setup and support that they have now, it would have been more difficult for us. Now they’re fully able to support us.”

The F&B market has evolved greatly in the last 20 years, Garutti said. “People have higher expectations. People want to know where their food comes from, if they’re made with great ingredients.

“But people still like to eat the classic cheeseburger. We want you to get what you expect or what you’ve tasted in other places.”