When the sportsman married the model | Inquirer Lifestyle ❮ ❯ 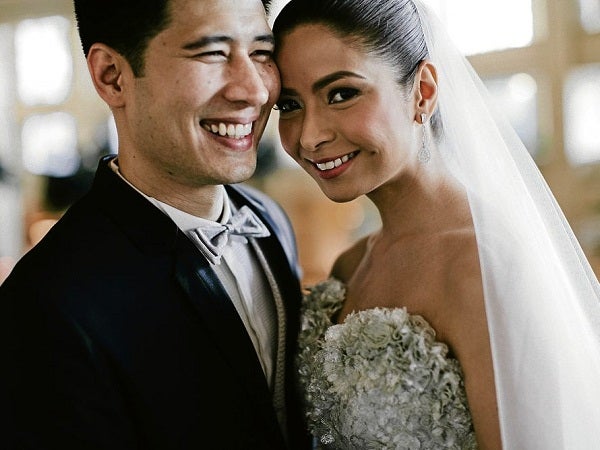 When the sportsman married the model

The ceremony was held at the Conservatory of The Peninsula Manila, and wedding rites were officiated by Fr. Tito Caluag.

With them at the end of the aisle were Rissa’s parents, businessman and former La Paz, Tarlac Vice Mayor Robert Mananquil and lifestyle editor Millet Mananquil.

The bride floated down the aisle in a beautiful multi-layered princess-cut bouffant tulle and Chantilly lace gown by one of Manila’s favorite bridal designers, Randy Ortiz, with makeup by Mickey See.

Cocktails were served at Peninsula’s upper lobby, and reception followed at the Rigodon Ballroom of The Peninsula Manila. Guests were greeted by floral arrangements by Zenas Pineda. Wedding photographer was J Lucas Reyes.

Mentor and dear friend Jackie Aquino, together with his JCA Productions team, kept everything smooth and seamless for the newlyweds. TV personality Tim Yap and sportscaster Patricia Bermudez-Hizon hosted the wedding reception.

Rissa’s second wedding gown by Rhett Eala featured Mikado silk with tulle overlay, bugle bead tassels and a sequined body in ivory. To cap off the program, a Bob Nicolas video masterfully captured the couple’s perfect day. Guests danced the night away with the music of DJs Jon Herrera and Euric Lumanog.