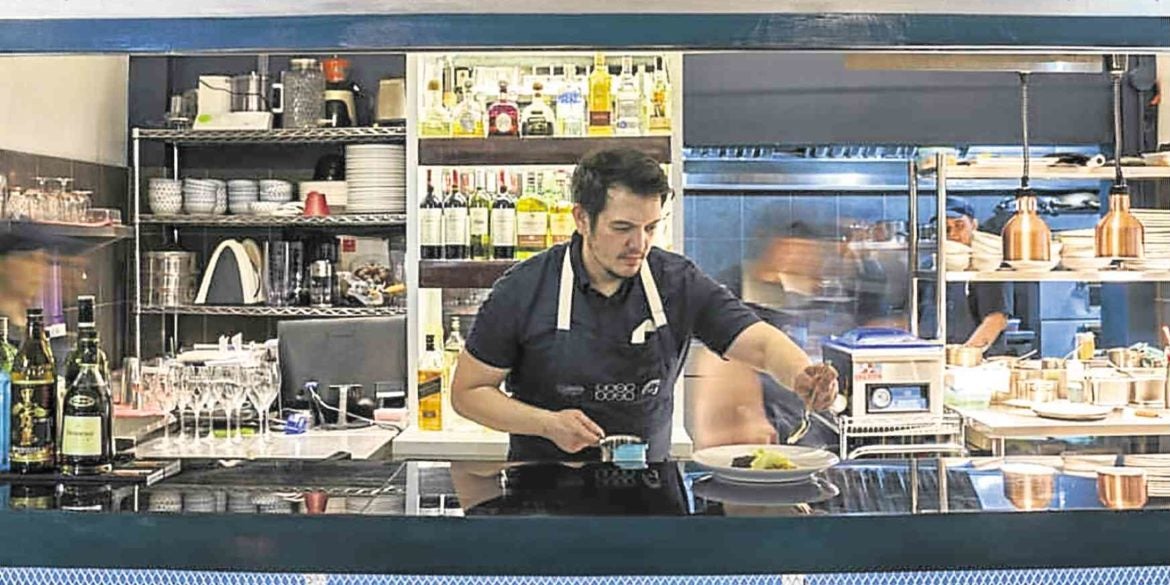 Chef Rob Pengson at Esquinita/Beso-Beso: Many of the “pintxos” and “tapas” have the expected grace, timing and execution of fine dining. —INSTAGRAM: CHEFROBPH

The last time I saw Rob Pengson, he was still at the helm of The Goose Station, where we collaborated on a menu inspired by the life and death of Jose Rizal.

The Goose Station was one of the first degustation restaurants in the Philippines (hence, the name), and one of the few brave, independent fine-dining restaurants here in the years when spherification and liquid nitrogen were all the rage.

It’s easy to speculate on why a restaurant might have closed— perhaps it was ahead of its time, or its location was remote and inaccessible, or there was some internal problem that the public was not privy to. All we know is that The Goose Station closed its doors for the last time in February 2016.

But a chef thrives in the kitchen, and it’s good to see Pengson behind the pass once more—at a new restaurant in Poblacion, Makati, behind Rockwell.

The new place is more intimate but broader in scope than his previous restaurant. It’s actually so different that it’s hard to draw comparisons, because the only common denominator is the chef.

Esquinita is the sign that you look for, and you’ll find yourself in an outdoor, Poblacion-style bar, though Pengson tells me that the plans are to close the place off, lanai-style and air-conditioned.

The main restaurant is called Beso-Beso, officially a tapas bar with cocktails. Upstairs is a more casual space that he envisions as a kind of izakaya, though he’s still playing around with ideas. All three spaces will share the same kitchen.

You can take the chef out of the restaurant, but the muscle memory is still there, and many of the pintxos and tapas had the expected grace, timing and execution of fine dining.

Poblacion, in general, tends to be an enigma wrapped within a disjunction folded inside a contradiction. The streets are grungy, to put it politely, but the town is home to
topnotch destinations like Oto (on Enriquez Street) which recently won a place on Asia’s 50 Best Bars, and relatively high-end restaurants like Lampara (also on Enriquez Street) and Tilde (on Matilde Street).

At Beso-Beso, the roof overhead is exposed corrugated iron, but the bar and kitchen are gleaming and polished. It’s a cozy space that works, despite the unexpected juxtapositions.

We had a tasting menu composed of items from the tapas menu, plus a few extra dishes from Pengson’s imagination. He gives us the caveat that it’s still a work in progress, though it doesn’t feel like it, and if he does offer it, it will be one of the best value degustation menus in town. (The restaurant is still on dry run and our meal was courtesy of the chef.)

One of the standouts was an apple, foie gras and unagi tart served at the beginning of the meal. There were several kinilaw/ceviche-type dishes that went well with the white sangrias that we were drinking.

If it sounds like a lot to you, indeed, it is. Gone are the minuscule portions designed to tantalize the diner and leave them wanting more. Here, the desire is to please and to satisfy.

Although Beso-Beso’s theme is ostensibly “Filipino meets European,” it seems that the mandate for Pengson is generally to cook things that he likes and that taste good.

There were liberal lashings of wakame, or seaweed oil, as much as there was truffle oil. He made liberal use of flavored aïolis as finishing touches. There were lots of umami from different sources, perhaps reaching a peak with the huevos rotos, a 63-degree egg with furikake flakes, gruyere and bits of chorizo.

I’ve never been a subscriber to the idea that a restaurant has to have a “concept,” and I’m fine with Beso-Beso being Pengson’s playground, simply to cook dishes that he likes and wants to share with his customers.

In keeping with the strangely beguiling mix of ramshackle and glamour that is Poblacion, Pengson’s dishes are not as polished and rarefied as those that he used to plate at The Goose Station. Some of the combinations are still a little rough around the edges, and during the course of the tasting menu some flavors tended to repeat themselves.

But I actually like these more than the tiny ones at the old place. These have more soul to them, more of the author in them.

The menu, too, flows in a more organic way. If you are just curious, come by and sample a smattering of dishes à la carte with cocktails of your choice, or perhaps order with wine as the centerpiece, and select what you think would go well with a nice bottle of red wine. If you have a couple of hours to spare, go for the tasting menu.

Everyone loves a good comeback story. It’s taken this chef quite a long time to step behind a stove again, but to see a full, humming dining-room and Pengson plating behind the pass was something well worth waiting for.

The culinary scene is all the richer for his return.—CONTRIBUTED