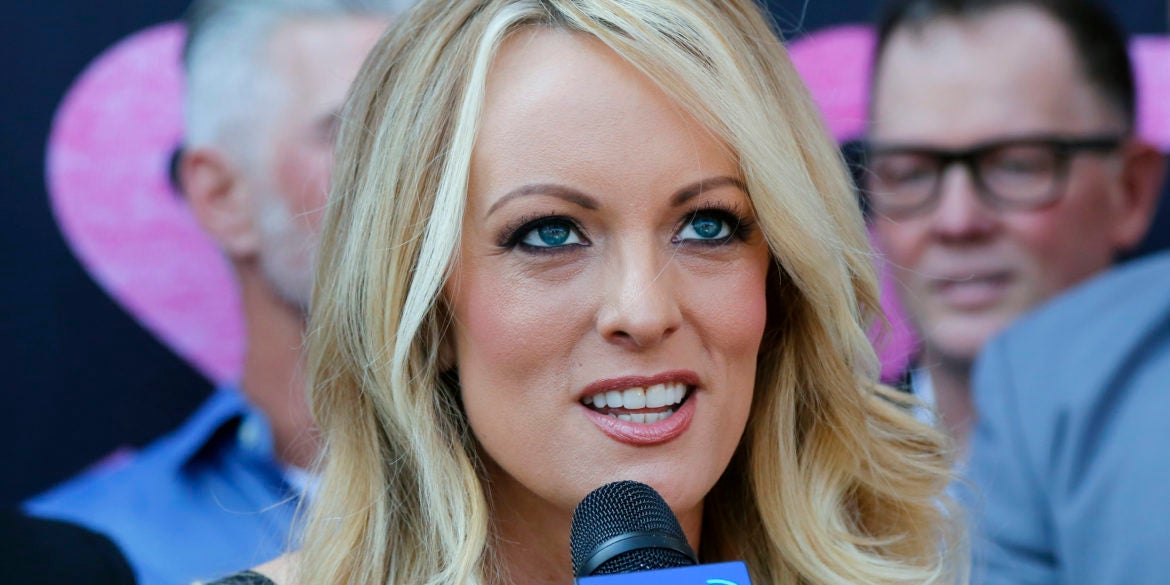 FILE - In this file photo dated Wednesday, May 23, 2018, Stormy Daniels speaks during a ceremony for her receiving a City Proclamation and Key to the City in West Hollywood, Calif. USA. Stormy Daniels, the adult film actress and nemesis of U.S. President Donald Trump, has pulled out of a British reality-TV show at the last minute after a dispute with producers, according to information released Friday Aug. 17, 2018. (AP Photo/Ringo H.W. Chiu, FILE)

Then businessman and reality TV star Donald Trump wanted sex and nothing else with Stormy Daniels the first and only night they were alone at a Las Vegas hotel suite.

Though the invitation was for dinner, Trump made his intention clear by wearing only pajamas when Stormy arrived at his suite obviously ready for action.

Stormy, by then used to all types of male chauvinistic behavior, would not be intimidated into silent submission. She demanded that Trump change clothes and he emerged from the bedroom after a few seconds in a coat and tie.

Trump went on a monologue about himself, going through the motions of trying to tenderize the meat he was about to devour.

It was a cartoon-like intermission between hi, hello and Trump’s real objective—to have sex with the woman made famous by her pornographic movies.

The sex took place and the details would be too lurid that they’re best left to the main storyteller, Stormy, to reveal in her tell-all “Full Disclosure.”

In so many words, Stormy’s conclusion about being underneath Trump was one of a woman frozen in one of the most unforgettable episodes of her life which she had tried to avoid happening—sex with the now most powerful man in the world was a bummer.

Full Disclosure doesn’t disappoint if, by its being written by what could now be the most popular pornographic actress in the world, one would expect Stormy’s story to be about sex or peppered with it.

While it would be tittilating to skip the prologue and earlier chapters in Stormy’s life and plunge straight into the chapters about her encounter with Trump, that would be like premature ejaculation.

The foreplay is as much a good read as the climax—the now-famous sex between Trump, now US president, and a woman who stared her life in the face even if many others derided it.

Full Disclosure takes you to the few ups and the many downs in the life of Stormy Daniels, or Stephanie Clifford, starting when she was a girl growing up witnessing how her mom and dad grew apart and went on with separate lives leaving their little kid mostly fending for herself.

It reminisced about the filth and obnoxious smell that overcame the place she called home as a child at Baton Rouge and the few moments she felt like she and her mom and dad were family.

It was the same filth she would encounter many times over, swept into her life by her encounters with men, including Trump, who considered women as creatures with half the brain of their male counterparts.

It was the filth she saw in a neighbor’s house where another girl, one of Stormy’s first friends as a nine-year-old, would reveal repeated rape by a man through her silence and refusal to look directly into Stormy’s eyes when she asked: Is everything alright?

It was the filth thrown at her by her childhood friend’s aunt and elder neighbors when she decided to save her friend from further sexual abuse and offered herself instead only to be condemned as a little whore or something to that effect.

From striptease artist to producer

First, a trial dance surrounded by women who would give Stormy the kind of treatment she never had in her mom’s hands—her hair being brushed, her face powdered and her dress put on her by tender hands.

Then came the actual dance which Stormy recalled doing like it was second nature to her because she rated herself as a good dancer only that, at some point in the music, she would show her boobs.

She quickly realized that her breasts could be assets and she treated them as such even giving them a name each—Thunder and Lightning.

She didn’t say which one is Thunder and which is Lightning but she knew they would bring her places.

That included a clinic where what could be the funniest part of Full Disclosure takes place.

Believing that, as a striptease artist, the bigger the boobs, the bigger the money, Stormy recalled being drawn into breast enlargement by what she heard and saw from her colleagues in the profession.

So one day Stormy found herself recovering from a breast implant operation at a doctor’s clinic she had chosen from several recommendations.

She wanted a 36D but she would soon realize that what the doctor gave her was far bigger—what she called in her book as “triple D”—wasting the many pairs of 36D Victoria’s Secret bras that she had bought in anticipation of a successful breast operation.

She abandoned the idea of suing after realizing that her Thunder and Lightning were way louder and flashier than had they been just 36D, earning her Best Boob awards and propelling her further to pornographic fame.

It was fame that took her one summer day to a golf course to meet the man who would change Stormy’s life in a way no other men she had sex with did, the then real estate mogul and “The Apprentice” star Donald Trump.

Before and after that fateful night when she had unprotected sex with Trump, Stormy has had several men in her life falling in and out of love and crying over at least two separations.

But her episode with Trump could be the most game-changing event in Stormy’s life even if the sex was brief and, according to Stormy, uneventful.

It brought Stormy to a world far darker than the industry she worked in where, according to her, sex only looks but doesn’t feel good.

Politics, Stormy realized, was where actors pretending to be enjoying sex and having orgasms would look like altar boys bringing offerings to the priest during Mass.

Stormy did accept a hush deal that paid out $130,000 in total but left her with just a little more than $85,000 after her then lawyer, Keith Davidson, and a wheeler-dealer she named only as Gina, took their cuts.

She had her reasons to agree to zip her mouth about that night in Vegas when she let Trump pump his way to what Stormy said was her most unpleasant sex.

Whether they’re valid or not would really be up to the reader to judge, but Stormy would soon find out it would not be the end of the story.

Soon she would hear about Michael Cohen, then Trump’s attorney, planning his own tell-all series of books about Trump which, Stormy surmised, would most likely include her story.

Plus a bitter ex by the name of Moz was trying to strike his own tell-all deal with tabloids after realizing that Stormy had told him about the encounter with Trump.

Though just 80 percent complete, according to Stormy, she didn’t want Moz, a publicist by profession, to profit from a story she had agreed to be quiet about.

It was a hush deal that Stormy felt cheated about especially when some news organizations got wind of it and publicized it based on stories told by sources other than Stormy, meaning the other people who were in on the deal.

Stormy felt betrayed and battered by the stream of social media comments calling her not only a whore but a gold digger as well.

She went to be interviewed by Anderson Cooper of CNN who made sure those watching the ratings-breaking episode of his show would know that Stormy came out not in exchange for money but because the now highly popular adult film actress had to.

Full Disclosure ends with many questions that weren’t being asked by Stormy but which one reading her tell-all would be prompted to ask.

Whether Stormy deserved sympathy would really depend on how the reader viewed pornography as a profession.

Full Disclosure could be rated HR—highly recommended reading but FOR ADULTS ONLY./ac