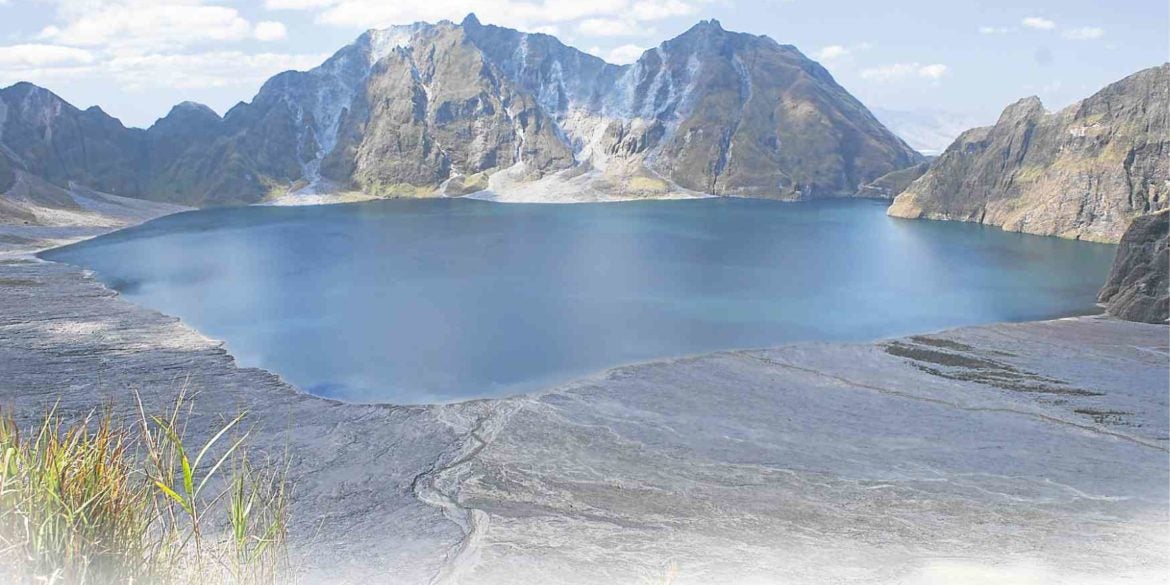 Magnificent view of the Mt. Pinatubo crater from the summit

Why would I, a 65-year-old grandmother, want to go on an ultra-challenging trek to Mt. Pinatubo?

I knew it wouldn’t be a walk in the park. That it would mean huffing and puffing, scrapes and bruises, slips and falls, twisted ankles, legs that would feel like lead, lungs about ready to burst, and a heart that would beat like drums in my ears.

The mighty Mt. Pinatubo, when it erupted in 1991, changed the course of the history and landscape of our beloved Pampanga. And so with Zambales and Tarlac.

Lives and livelihood were lost. Homes, churches and edifices were either buried or destroyed. The US military personnel stationed at Clark Air Base and Subic Naval Base flew off, but not without leaving behind two gems—the Clark International Airport and the Subic Seaport, anchors and gateways of what would later become the Clark and Subic Freeport Zones. But that’s another story.

I wanted to see the route which the lava and lahar flowed through on the Angeles and Porac side. And the crater.

Roman King, de facto leader of the Aetas of Barangay Inararo in Porac, Pampanga, recalled how the rumbling molten lava melted everything that stood in its way—trees, rocks, giant boulders… everything!

In the aftermath, there was nothing to see except the highlands and lowlands blanketed in light gray, almost white, lahar and ash. It was a dreary, heartbreaking sight, he said. The entire barangay was buried, and over 500 families had to be relocated to Barangay Villa Maria, also in Porac.

Almost three decades later, the rains, thankfully, washed away most of the lahar and ash fall, exposing a landscape that was buried by an eruption 500 years ago. It was a sight I was about to experience: the rugged mountainscape, the Sacobia River and its tributaries, and the luscious flora along the path leading to the crater of Mt. Pinatubo.

And so it came to pass, the great adventure.

After a briefing by Mark Celzo of Golden Trail Traveler’s Resort and Adventure at its office in Sitio Target, Barangay Sapang Bato in Angeles City, we jumped into 4×4 vehicles, and, right away, we felt a portent of things to come.

We held on to our seats while navigating the steep uphill and downhill slopes. There was that constant fear of falling off the cliffs into the deep ravines. I kept thinking of my family, what if…? And then I’d immediately shake off the morbid feeling.

We reached the camp site/viewing deck or Tanke (so named because of the huge tank that stores water piped down from the mountains), where we surveyed the terrain to scale before reaching the summit.

What a terrifying sight!

It was also there where King met up with us. He told stories about their culture, his experiences, and his goal of bringing his people—who roam around the lowlands selling kamote and bananas, which are not exactly their produce—back to where they really belong, the highlands of Barangay Inararo. (See sidebar.)

Next, we hopped into our vehicles for another 20-minute ride to the jump-off point of the trail. And there, our trek began.

I went to the trail prepared, thanks to the advice of my niece, Krizia Tranquilino, a director of the Greater Clark Visitors Bureau and the moving force behind our little group’s adventure. I wore a long-sleeved shirt and long leggings to prevent cuts; gloves to make it easy to hold on to tree branches and to the rope for support; and a hat to spare my aging face from the harsh sun (and more wrinkles).

I was practically unscathed, except for a bruise from a minor fall on some boulders.

We journeyed through rivers, streams, cold and hot springs, stepping on river stones and rocks—gingerly, of course—so as not to slip. It’s amazing how one could be instantly invigorated by a short wade through a shallow brook, let alone a drink from the crystal-clear waters of the upper river.

Where the current was a bit too strong to walk through, bamboo poles, tied together to form a bridge, were, thankfully, set in place.

For the difficult cliffs and ravines, loose pumice stones and powdery sand, we were aided by ropes, walking sticks, and the strong grips of our professional guides, all of whom were proudly katutubo.

Thirty minutes into our trek, we heard the loud splash of the Ana-an waterfalls, followed by the Inararo, Inararo Rock and Inararo Running Falls, each one beckoning us to take a dip in its cool, crystal-clear waters. We could not resist.

Although the rough journey was taking a heavy toll on us, we still marveled at the boulders as large as houses, and savored the sight of the vast forest, its wild flowers, orchids, ferns and fruits springing pleasant surprises.

Five hours into the trek, with every ounce of strength left in our weary bodies, mind over matter, we pushed ourselves to scale what seemed like a kilometer of the steepest incline, until we actually did it. We reached the summit!

And there it was: a majestic view of the placid lake in the crater! What wonders God has blessed us with!

But I kept thinking—how could something so destructive be so beautiful?

We just sat there, munching on the light snacks that we brought along, and stared at what looked like a scene from a sci-fi movie. A bit surreal. Even eerie. But magnificent, nonetheless. It was worth it. And it showed in the smiles on our faces.

The trek back wasn’t something I looked forward to. It was no less torturous. And I felt like all my toenails died.

But no matter. The “high” that we felt at the summit was enough to carry us through. And the “boodle fight” dinner of adobo and fried native chicken, inihaw na bangus, fried galunggong, and steaming, fragrant rice, prepared by King and his wife back at the campsite, was devoured by our starving and grateful bunch.

What a day. What a great day!

So, will I do it again? The waterfalls are quite inviting. And then there’s the Golden Trail and El Kabayo Horseback Riding Adventure along the Sacobia River and The Gorge. Plans are afoot for a zipline, wall-climbing, rock climbing and kayaking.