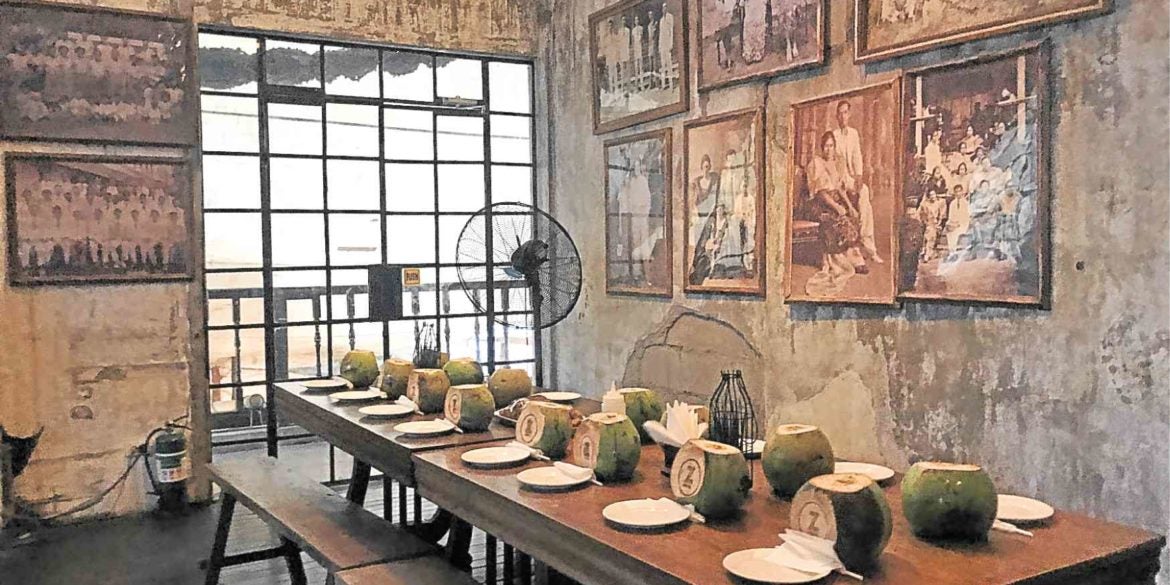 Siesta at the hacienda vibe at The Ruins

Discovering Poblacion through history and food

Poblacion is not just about parties; the hip Makati area is also a hub for dining and culture.

There are a number of street art and easy-to-miss historical sites beyond the pubs and clubs. Ever noticed the 399-year-old church near Loco Manuk and Dulo?

As part of its Let’s Getaway campaign, functional apparel brand Merrell recently took us on an urban adventure to promote its latest lifestyle shoes. Senior marketing associate Jemille Carolino said that Merrell gear is as good for roughing it out in the mountains as it is for rediscovering the city—also a pocket travel activity when one lacks the time or, well, funds.

The Poblacion Discovery Tour, organized by Meaningful Travel PH, was a two-hour walk around Makati (we only wish the sidewalks were actually sidewalks), but did you know how the city got its name?

Huddled together in Poblacion Park, across the Museo ng Makati (closed for renovations), we listened as our guide Ann Marie Cunanan explained that the financial district used to be swampland. “During the Spanish occupation, Governor General Miguel López de Legazpi was in the area and was told by the residents around Pasig River that the tide is ebbing—‘makati na, kumakati na’—so he called the place Makati.”

Barangay Poblacion, particularly those places around the then pristine Pasig River, had bahay bakasyunan of affluent families. Some of these houses are still in the area but they are barely preserved as heritage sites. At present, Poblacion Park is mostly known as “tawiran,” the easiest and cheapest way to get from Makati to Mandaluyong. Boat fare is P5, for those who are not queasy of the stench.

The best time to go there is during Holy Week, as it has been a tradition to hold interbarangay competition on which “Kalbaryo” station has the best setup. We’ve seen big production booths with LED lights and over-the-top Jesus over the years; as a Makati born-and-bred friend told us, “it’s more happening in Poblacion on Good Friday than Christmas.”

Opposite the church is San Pedro Macati Cemetery, a former church patio renamed Plaza Cristo Rey. There is an urban legend that says the square is haunted since not all remains have been excavated. Thankfully, we didn’t feel any presence, probably because it was an extremely hot afternoon that even ghosts want to chill.
Adobo flakes

Street artist Dee Jae Pa’este met us in The Ruins, which is literally the remains of an old ancestral house that has been repurposed into an events place. It is managed by Z Hostel, which also has a café that serves Filipino food such as adobo flakes, sisig, beef sinigang and bagnet with egg that goes well with garlic rice.

Dee Jae relocated to Manila from Brooklyn to spread awareness on how street art can channel change. Over turon and fresh buko juice, he told us that the good thing about “public art is that it affects people in a positive way without pushing it.”

“Can you imagine what the country will be like if there’s more art in everyday spaces?” Dee Jae asked. He took us to the rooftop of the building where Steps Dance Studio is, and showed us a massive work commissioned by Sofia Elizalde, founder of the dance school. The images are very Filipino—carabao, eagle, gecko and a woman with flowers on her hair all done in a teal-purple-rose palette that complemented the colors of the summer sunset.

After paying attention to the colorful graffiti (which is often overlooked because people go to Poblacion at night), we had a home-brewing workshop with Vanessa Caceres, operations and training manager of Commune which is a pioneer third-wave coffee shop in Poblacion. It specializes in Philippine coffee served several ways: drip on ice, 18-hour cold brew, affogato with Carmen’s Best Madagascar ice cream.

Commune is also a Poblacion community center for talks, improv shows and viewing parties such as the “Game of Thrones” finale screening organized by Merell—a fitting ending for a day of dining and exploring.