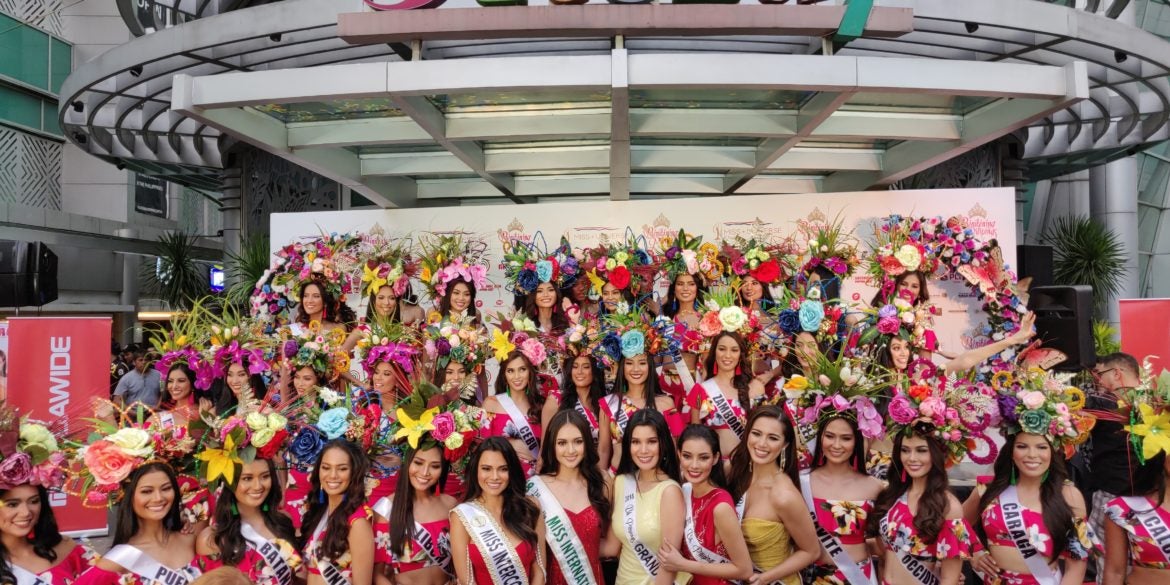 If in the past the ladies donned swimwear as they went around the commercial district, the 2019 aspirants sported midriff-baring resorts wear. But like their predecessors, they also wore headdresses.

He used a hibiscus-printed fabric for the ruffled off-shoulder top and mini skirt because “it’s gumamela, a flower that we find here in the Philippines.”

(“Gumamela” is the Filipino name for hibiscus.)

Pageant aficionados once again trooped to the Araneta Center to catch a glimpse of this year’s Binibining Pilipinas pageant candidates.

Throngs of fans carrying placards and posters bearing their favored candidates’ names, numbers and images lined the streets around Shopwise and the other areas along the parade route, which reached the portion of Edsa in front of Farmers Plaza, chanting admiration for their chosen “binibinis” at the top of their lungs.

The 40 ladies generously showered them with affection, smiling and waving at them, at times blowing kisses and responding “I love you too” to their adoring fans.

Complete with a marching band and a platoon of majorettes, the parade drew inspiration from the festive Filipino spirit and the country’s fiesta culture.

Reigning queens also joined the parade, as in the previous years.

Fans will get another chance to see all of the 40 official Binibining Pilipinas pageant candidates at the special fashion show and national costume competition at the New Frontier Theatre on May 29.