Winter has come—and gone: Is there (TV) life after ‘Game of Thrones’? | Lifestyle.INQ ❮ ❯ 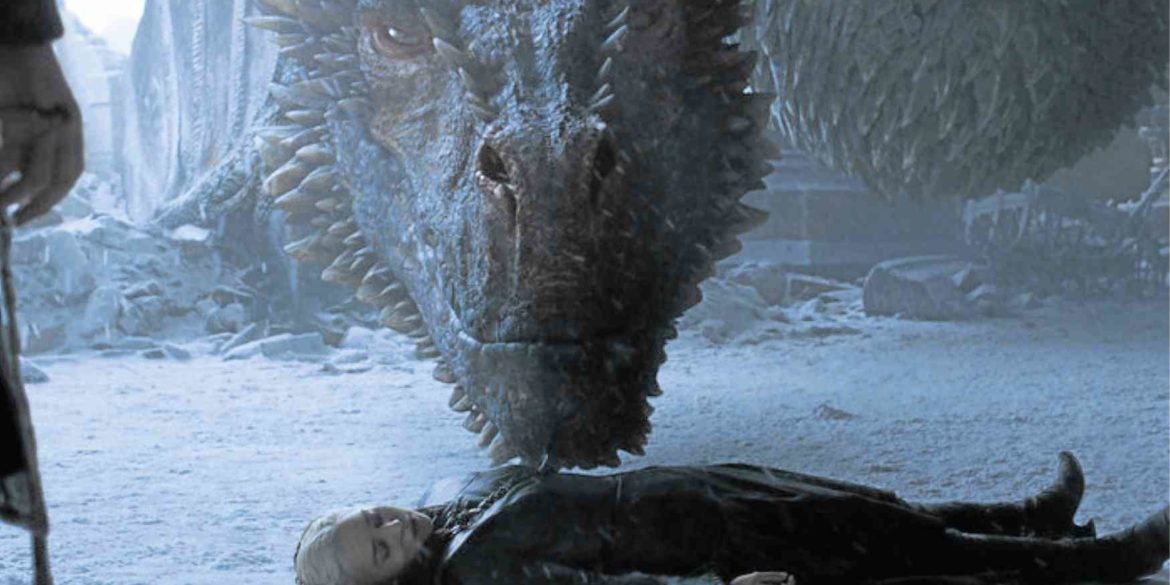 Drogon (a very convincing computer-generated dragon) mourns the death of its “mother,” Danaerys Targaryen (Emilia Clarke), in the final episode of “Game of Thrones.” —HBO

Winter has come—and gone: Is there (TV) life after ‘Game of Thrones’?

With the most epic series in television history now just a memory, how do we move on?

Spoilers galore ahead. (Come on, guys, it’s been a week.)

My friend still cries every single time she talks about the scene where a sobbing Tyrion Lannister finds the bodies of his siblings Jamie and Cersei, buried under the rubble of their once grand palace. A work colleague almost chewed my head off when I made some observations, demanding that “Everyone stop talking about it, please!” As in, everyone. All the time.

I’ve read curses, threats, bitter complaints, expletives hurled at unfriended friends on social media, lives in seeming ruins because somebody spilled on the latest episode. Some tried to be cute and just posted a single name (“Arya!” “Jorah!”), but they still got reprimanded. Just naming a character can ruin the anticipation, someone pointed out.

Whew. I never thought watching a TV series—entertainment, for crying out loud—could be like walking on eggshells.

Filipino viewers joined in the universal anticipation—and, it turns out, criticism—of the mammoth HBO TV series “Game of Thrones” (GoT) when the 73rd and final episode after eight seasons, spanning eight years, aired May 19, Sunday evening in the United States (9 a.m. Monday here). Traffic was light Monday morning—I don’t know if that was a coincidence.

I was a latecomer to mild GoT fandom. Years ago, I wondered why my nephews and nieces were raving over these funky-sounding books, and this TV series where I first fleetingly glimpsed a young Emilia Clarke as a luminous, impossibly blonde Danaerys Targaryen.

That was 2011, after, as several actors (now superstars) on the show recounted, they had been asked to audition for the pilot show for “some kind of medieval fantasy” series for HBO.

There were also the riveting plotlines (warring royal families, with a sprinkling of magic), incredible production design, unprecedented for a TV series, and a cast of outstanding actors. Much has been written about the complex characters, and how the series and its writers, David Benioff and D.B. Weiss, hardly ever spared anyone, hero or villain, the complications of survival.

“The moment where Bran Stark is pushed out of the window, I realized I was reading something different from any other fantasy novel,” Benioff told The Telegraph after the first season. “Any other novel, in fact. You become so immersed in the characters, and develop so much affection for them, and then all these horrible things happen to them. When Ned Stark dies, it makes you very tense. Once you realize that heroes die, everything becomes that much more terrifying.”

I found a new favorite in the show’s biggest little actor, Peter Dinklage, a real-life dwarf whose wisecracks and wisdom as Tyrion have won him three Emmys (the show has won more Emmys than any other TV show on record, incidentally).

GoT was the most popular series in HBO’s history, averaging 30 million viewers per show. True-blue GoT fans who were there from the beginning, however, complained about the bad writing of the final season, the lack of a proper arc for character development, and what they considered an ill-concealed attempt to hurry the show through its final six episodes (possibly because Benioff and Weiss had already been drafted to write the next “Star Wars” installment?).

Also, author George R. R. Martin had turned over just an outline for this one, which gave the writers the leeway to tweak the story. Martin is saying, in fact, that the ending of his version of the uncompleted book may actually be different (huh?).

Frankly, I can’t relate, mainly because I don’t know enough to compare, but also because I just enjoy the good acting, which can sometimes transcend bad or so-so material.

So, why was this show so successful? The synergy of the best talent—a combination of fresh faces and veteran actors—made for characters you just adored or despised.

Lena Headey’s Cersei Lannister, for example, was conniving beyond belief, and Iwan Rheon’s Ramsay Bolton was disgusting. Kit Harrington’s morally upright (some might say clueless) Jon Snow was someone you wanted to protect from the bad guys, and Maisie Williams’ cute little Arya grew up into the most kick-ass character of all.

The visual spectacle was unprecedented, full of stunning location scenery, perfectly framed scenes (i.e., the flames and flying dragons of the Hound and the Mountain’s last fight), and mind-boggling special effects—chopped-off heads spurting blood, zombies, fire-breathing dragons that can act (see Drogon’s palpable grief when it realized its mother was dead), and huge wolf dogs on steroids.

In his article in The New York Times, “‘Game of Thrones’ Changed TV. Let Us Count The Ways,” published on April 5, TV writer John Koblin notes: “It is a show whose budgets and scale were once unthinkable for television—and now it’s become the gold standard.” That’s around $10 million per episode, much more for final season highlights like the impossibly dark “Battle of Winterfell” (“Brownout sa Winterfell!” Filipino fans screamed.)

One additional factor no other shows ever had before, however, was social media, a forum that made each episode almost interactive. Reactions were posted in real time, and shared universally in minutes. Everyone had a voice. (One poetic post I read went, “P—-ina Grey Worm, bakit ang k-pal mo?!!)

Even before people were discussing the plots in person, there were already forums, groups, discussions—get a load of winteriscoming.net, watchersonthewall.com, gameofthrones.fandom.com, westeros.org, and a Game of Thrones Fan Page on Facebook (followers: 454,000).

Fans felt such intimacy and ownership, in fact, that about a million of them signed an online petition for a rewrite of the entire season. Actress Sophie Turner, who played Sansa Stark, took to Twitter to call them “disrespectful.”

In the meantime, what have we learned from the whole GoT phenomenon?

1) You get what you pay for. HBO invested ridiculous amounts of money in “Game of Thrones”—and every time we gasped at a scene, we saw where it went. “‘Thrones’ was the first show that demonstrated you could produce a show with real cinematic scope,” Casey Bloys, HBO president for programming, told Koblin in The New York Times article. “That you could think bigger—both in terms of character and drama and in special effects. That it would work, that taking shots and spending real money and putting it on the screen would pay off.”

2) True talent dazzles, no matter what size you are. I love you, Tyrion/Peter Dinklage!

3) The number of spoilers has grown in direct proportion to the number of professed fans. Why do they ruin everyone’s day? Because they’re pathetic, and because they think it’s fun. Malicious spoilers occupy a special place in hell—but that being said, the nut cases who become rude, ballistic and inconsiderate when confronted with spoilers belong right down there with their tormentors. So it’s over—what to do about everyone you’ve unfriended?

4) Many Filipinos loved GoT because it had all the elements of a great teleserye, with a bigger budget and an actual, unpredictable storyline. Then again, many other Filipinos were really not into it, and would rather watch “Ang Probinsyano.”

5) What’s next? As Koblin writes, “Now all someone has to do is find the next ‘Thrones.’” And yes, with the advances in technology as well as creativity, there will be another such phenomenon in the future.

Meanwhile, Sophie Turner has married a Jonas brother, Peter Dinklage is inundated with scripts, and I’m just happy that Ghost the Goodest Boi got his scritches. As Isaac Hempstead Wright, the actor who played Bran Stark, said on the Jimmy Kimmel show about what he’ll do next: “Get on with life.” We would do well to take the king’s advice.