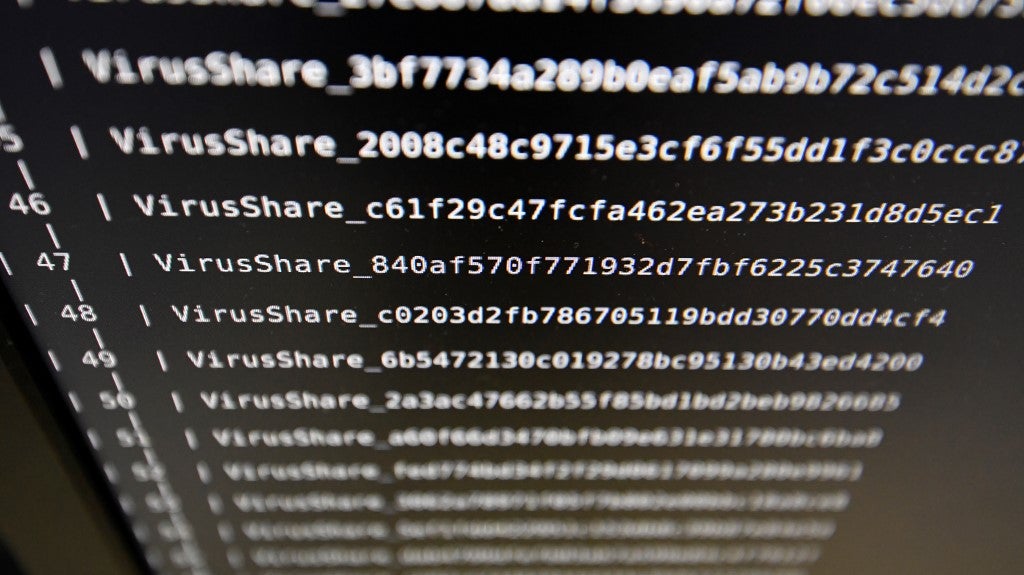 This picture taken on November 3, 2016 shows on a screen viruses list at the LHS (High Security Laboratory) of the INRIA (National Institute for Research in Computer Science and Automation) in Rennes. - Paradise where computer viruses blossom under the watchful eye of scientists, the Laboratory of high security (LHS-PEC) of Rennes is a small fortress from where emerge the first studies on the "ransomwares", those digital brigands which Dominate the malware market. (Photo by DAMIEN MEYER / AFP)

Virus-packed laptop sells as artwork for over $1.3 million

On Tuesday his creation “The Persistence of Chaos” rocked the art world, selling for more than $1.3 million in a New York online auction.

It is a powerful symbol of the threat on simple laptop can pose to the entire world. The six trojans, worms and malware loaded on it have caused at least $95 billion in damage around the world, according to Guo.

The computer, viewed via an online video stream, is harmless in its auction state — turned on, but not connected to any network or the internet.

The auction site says it is “airgapped” — its wireless and internet connections physically and electronically plugged.

But it comes with ominous warning to the buyer not to unleash its pathogenic programs — possible by unplugging its connection hardware, or by simply inserting a thumb drive.

The site stresses that the artwork is for research use only, saying that anyone who submitted a bid contractually agreed that they “have no intention of disseminating any malware.”

At the same time, the site appeared to acknowledge that the buyer might not heed the agreement.

“Please remember that these are live and dangerous malware samples,” it said.

“Running them unconstrained means that you will infect yourself or others with vicious and dangerous malware.”

The buyer was not identified. /cbb