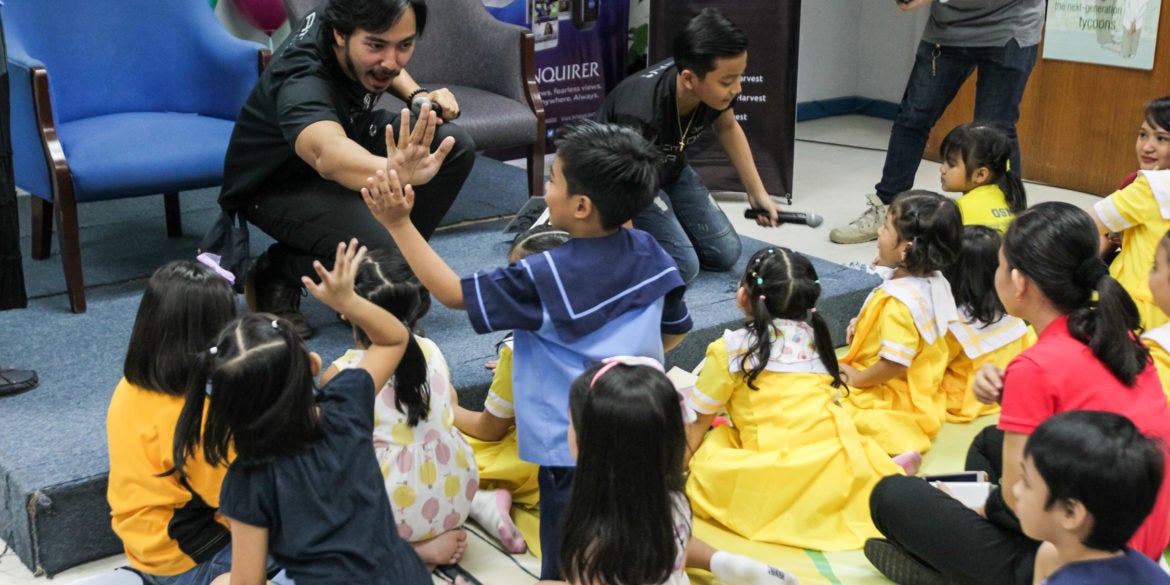 The words came from a young actor, Miguel Valdez, who joined the Inquirer’s Read Along session on Saturday along with another young artist, Zyren Dela Cruz.

Valdez and Dela Cruz were first time readers and admitted feeling nervous in front of a group of children at the Inquirer main office in Makati.

They read together Russel Molina’s “Anong Gupit Natin Ngayon (What Is Your Hairstyle Today?)”, a story of a father and his son’s relationship as they grew older.

“I enjoy being around kids” said Valdez.

Reading, he told the children at Inquirer, teaches them new words.

Dela Cruz , currently in Grade 8, said reading was important because “we learn lessons from the stories that we can apply to our lives.”

Just like their performances on television or the movies, the two young actors had to rehearse before facing the children at Inquirer. “We practiced before the session,” De la Cruz said.

A veteran actor, Ricky Davao, was also on hand together with professional storyteller Rich Rodriguez.

Rodriguez read Luis Gatmaitan’s “Sandosenang Sapatos (A Dozen Shoes)” about a shoemaker whose youngest daughter was born without legs.

Davao read Rhandee Garitos’ “May Higante sa Aming Bahay (There’s a Giant in Our House)” about a son’s awkward encounter with his father who had just come home from abroad after a long absence.

Valdez, Dela Cruz and Davao star in the upcoming Cinemalaya film ANi (The Harvest), the first science fiction movie to be part of the film festival.

The official trailer of the movie was also shown before the read-along session, stirring the children’s curiosity.

The movie was set in the year 2050 and follows the adventure of an orphan boy who moved to a farm to live with his estranged grandfather and his robot friend, ANI. (Editor: Tony Bergonia)