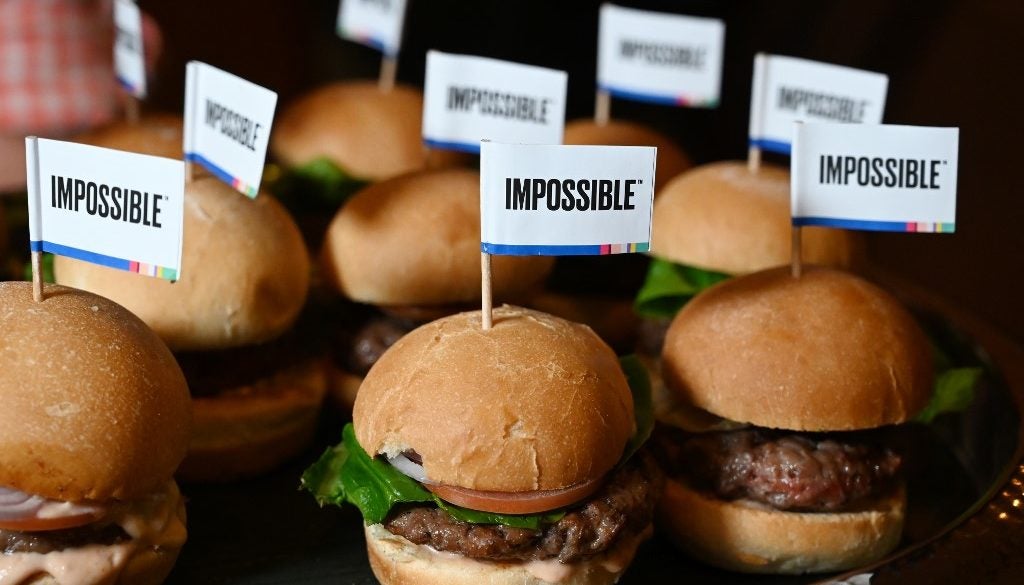 (FILES) In this file photo taken on January 7, 2019 the Impossible Burger 2.0, the new and improved version of the company's plant-based vegan burger that tastes like real beef is introduced at a press event during CES 2019 in Las Vegas, Nevada. - No longer at the food fringes, plant-based meats are selling well in supermarkets and emerging as a hot commodity for fast food chains, industrial food companies and Wall Street investors. JPMorgan Chase has estimated the market for plant-based meat could easily top $100 billion in 15 years.Barclays says the "alternative meat" market could account for around 10 percent of all global meat sales, or up to $140 billion in 10 years. (Photo by Robyn Beck / AFP)

Is alternative meat the future of dining?

No longer at the food fringes, plant-based meats are selling well in supermarkets and emerging as a hot commodity for fast food chains, industrial food companies and Wall Street investors.

JPMorgan Chase has estimated the market for plant-based meat could easily top $100 billion in 15 years.

Barclays says the “alternative meat” market could account for around 10 percent of all global meat sales, or up to $140 billion in 10 years.

Among big restaurant chains, Burger King has been testing since April a vegetarian version of its flagship “Whopper,” while McDonald’s has unveiled a meatless burger in Germany. Kentucky Fried Chicken is studying non-meat options for its menu.

Alternatives to meat are not new, of course, but startups and other growing players in the business have taken advantage of newer technologies to simulate the taste and texture of authentic meat more comprehensively.

At the same time, more consumers are opting for plant-based products out of concern for the environment, animal welfare or for health reasons.

The best-known new ventures, Impossible Food and Beyond Meat, have had difficulty at times meeting surging demand for their products, even as Wall Street has bet on their potential.

On its first day on Wall Street as a publicly-traded company, Beyond Meat surged 163 percent, finishing the session at $65.75.

Since then, shares have more than doubled, ending Friday’s session at $139.13, up a stunning 39.4 percent after the company said it anticipates sales growth of 140 percent.

Impossible Burger, which is already sold in more than 7,000 restaurants in the United States and Asia, recently raised $300 million in a financing round that valued the company at $2 billion.

Among large food companies, Swiss giant Nestle in April launched its “Incredible Burger” in Europe based on soy, wheat and extracts of beetroot and other plants.

In the fall, Nestle plans to offer a pea-based “Sweet Earth” veggie burger in the United States.

Anglo-Dutch company Unilever last year bought the Vegetarian Butcher, which has said it aims to become the “largest butcher in the world” with plant-based meat.

US company Kellogg has been present in alternative meat since the 1970s through MorningStar Farms. While the brand has not enjoyed the same outsized gains of late as the newer players, it remains the biggest producer in the United States.

Others active in the burgeoning business include Brazilian giant JBS, which is launching a vegetarian burger in its home market, and Tyson Foods, a one-time investor in Beyond Meat that plans its own plant-based product.

Sales of alternative meat jumped 23 percent in 2018 in the United States, according to the Food Institute.

Yet that accounts for just one percent of the total market for meat, much lower than the 13 percent of milk represented by non-dairy sources such as soy, almond and coconut.

In spite of the strong potential, analysts caution against losing sight of some uncertainties facing the industry.

“There are risk factors to consider, such as alternative meat products being less healthy than claimed as a result of additives to appeal to customer taste,” said the Barclays note.

Barclays also pointed to “potential regulatory restrictions” as far as marketing. For example, farm groups have lobbied Washington to restrict the term “meat” to animal-based products.

Also, there is always a risk that emerging stars in the business could be roiled by a recall, said JPMorgan.

And the impact of mistakes could be amplified by the growing presence of bigger and more diversified companies that are racing into the market. The conventional companies also have sophisticated supply chains and ready access to capital.