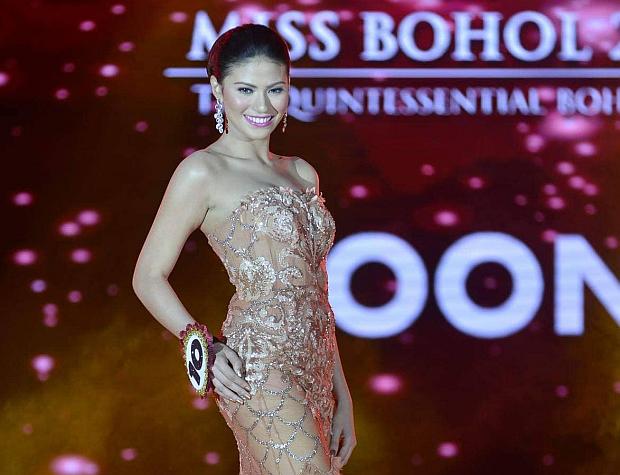 Gazini Christiana Ganados was named Miss Bohol 2017 first runner-up in 2017 before she was named as the country’s representative to the 2019 Miss Universe Pageant during the Binibining Pilipinas coronation night held in Araneta Coliseum, Cubao, Quezon City on Sunday, June 9, 2019. (Photo from the Miss Bohol pageant organizers)

TAGBILARAN CITY, Bohol, Philippines — Boholanos are also rejoicing over the victory of Gazini Christiana Ganados who was crowned the 2019 Binibining Pilipinas–Universe on Sunday.

The 23-year-old Ganados traces her roots to Loon town in Bohol province as her mother’s family has relatives on Sandingan Island.

Miss Tagbilaran 1987 Fiel Angeli Araoarao-Gabin said it was Ganados’ destiny to win the most coveted crown.

“Given the attributes required of and possessed by a beauty pageant candidate, to become a beauty queen also has something to do with perfect timing, rather than destiny,” Gabin said.

Gabin, who was the chairman of the board of judges during the Mutya ng Central Visayas Regional PRISAA 2017, said that she saw the potential of Ganados when she won the title.

Many Boholanos also claimed her as their own because her grandfather was from Sandingan Island in Loon town.

Ganados was born and raised in Dapitan City, Zamboanga del Norte, but she later moved to Talisay City in Cebu when she was in Grade 6.

A tourism associate graduate from the University of San Jose-Recoletos, Ganados was Miss Cebu Schools Athletic Foundation Inc. in 2016.

Some netizens said that the setbacks were signs that she was off to something better, a bigger crown.